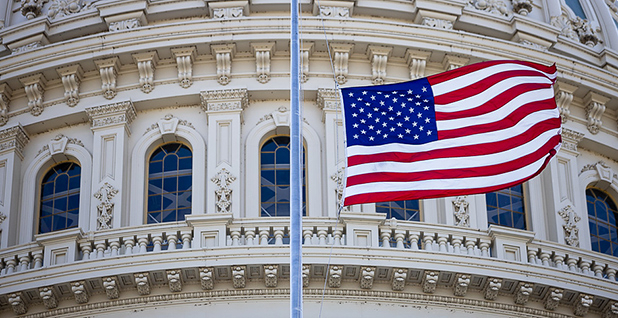 House and Senate lawmakers are working through a backlog of agenda items while mulling another major coronavirus response bill. Francis Chung/E&E News

The Trump administration is showing renewed interest in another round of COVID-19 stimulus before the August recess, while Capitol Hill also braces for debates on police reform, infrastructure and fiscal 2021 spending bills.

Although Republican leaders have called for a wait-and-see approach to legislating additional pandemic relief, top administration officials in recent days have signaled that more stimulus is coming.

White House trade adviser Peter Navarro said this weekend that the administration envisions a phase four stimulus package aimed at manufacturing that is "at least $2 trillion."

"We are facing significant structural headwinds," Navarro told CNN on Saturday, citing the impact of COVID-19 on service-oriented sectors of the economy. "The only way to fully rebuild the economy in the face of those headwinds is to significantly expand and strengthen our manufacturing base."

Navarro is the latest administration official to talk up the need for additional stimulus in recent days, including White House economic adviser Kevin Hassett, who said on MSNBC on Thursday that "there’s a 100% chance the White House believes that there will be a phase four deal where more help is on the way."

One driver for new relief talks is the pending June 30 deadline for applying for the Paycheck Protection Program (PPP).

Treasury Secretary Steven Mnuchin signaled last week that the administration would support adding funds to the popular small-business loan program in an appearance before the Senate Small Business and Entrepreneurship Committee.

"I definitely think we are going to need another bipartisan legislation to put more money into the economy," Mnuchin told Sen. Tim Scott after the South Carolina Republican noted that "many are asking about a second bite at that apple."

Speaker Nancy Pelosi (D-Calif.), who negotiated earlier COVID-19 packages with Mnuchin, was quick to note the secretary’s remarks during her weekly news conference the following day.

One flashpoint in the upcoming debate will be transparency over PPP recipients. Mnuchin testified that the administration will not disclose the names of companies that receive aid under the small-business loan program, calling such information "proprietary."

That response was roundly criticized by Democrats, prompting the chairs of the House Ways and Means, Financial Services, and Small Business committees on Friday to formally request the names of all PPP loan recipients.

A competing agenda item is the police reform push brought on by the death of George Floyd at the hands of Minneapolis police last month, sparking widespread demonstrations and civil unrest nationwide.

The House is expected to return next week to vote on Democrats’ reform proposal, while Senate Republicans will unveil their own proposal Wednesday, Sen. James Lankford (R-Okla.) said on CNN’s "State of the Union" yesterday.

House Majority Leader Steny Hoyer (D-Md.) wouldn’t rule out the possibility last week that stimulus and police reform legislation could be combined, although he said it wasn’t likely.

Although the House is not in session this week, work continues at the committee level, with the Transportation and Infrastructure Committee holding a markup of the chamber’s nearly $500 billion surface transportation reauthorization legislation on Wednesday (see related story).

Senate Republicans have been cool to Democrats’ calls for infrastructure spending to be part of future stimulus, but there’s bipartisan support for such investments in both chambers, and additional relief could provide a legislative vehicle for the highway bill.

The House Ways and Means Subcommittee on Select Revenue Measures on Thursday will hold a virtual hearing on "Tax Relief to Support Workers and Families During the COVID-19 Recession," where pent-up desire to see clean energy tax incentives extended as part of pandemic relief may emerge (E&E Daily, May 29).

Congress also continues work this week behind closed doors on the fiscal 2021 spending bills, which are expected to soon surface.

Senate Appropriations Chairman Richard Shelby (R-Ala.) reiterated last week that he expects Senate appropriators to start moving some of the 12 annual spending bills next week. The order in which the measures will be marked up has not yet been announced.

The House, meanwhile, is in the unusual role of starting its appropriations work after the Senate. House appropriators are planning to mark up bills in subcommittees the week of July 6 and in full committee the following week, with a goal of having all 12 pass the House by the end of July.

"We’ve been pretty successful at having a bipartisan bill that generally gets very broad, broad support. So I’m pretty optimistic," she said.

Kaptur said two major focuses of the bill would be addressing the water infrastructure backlog and devoting more money to clean energy research.

She noted that many dams and locks around the country are long overdue for modernization projects and risk failing.

"Every year that goes by, the odds are something’s gonna give somewhere; we just don’t know where it is," Kaptur said.

Kaptur said she also would continue to argue that research investments in the bill can help move the nation closer to a "clean energy economy."

The idea has gained bipartisan traction in recent years and has led to large spending increases for Energy Department research and development programs.