Pandemic stirs up ghosts of 2010 on La. coast 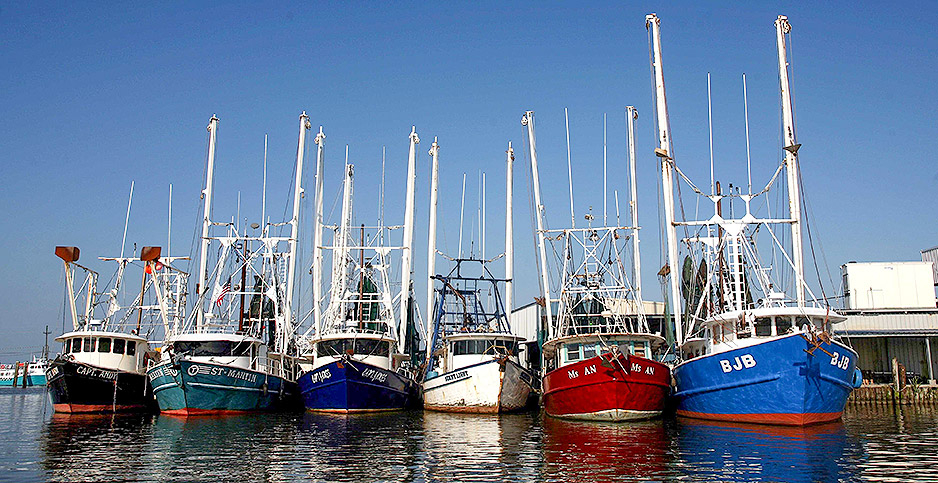 Commercial fishing and shrimp boats sit idle in the Venice marina in Plaquemines Parish, La., in May 2010 after the Deepwater Horizon drilling rig exploded, killing 11 workers and spewing oil into the Gulf of Mexico. Varley/Sipa/Newscom

Ten years ago this month, the Deepwater Horizon oil rig exploded in the Gulf of Mexico, killing 11 workers and spewing a total of 4.9 million barrels of oil toward Louisiana’s fragile coastal wetlands and estuaries.

Even Blink’s June wedding may be affected if Louisiana’s stay-at-home order is extended beyond the end of this month.

But Blink isn’t wallowing. He’s a doer with a long history of problem solving.

"It doesn’t make sense to live here if there’s not a thriving economy, and there’s not a thriving economy if there aren’t robust wetlands to serve as a buffer to protect homes, businesses and the culture itself," Blink said in a recent telephone interview, speculating that his election win shows residents are looking for leaders who take "a long-term, balanced view" of problems like coastal erosion.

"Moving forward, it’s clear we need to be smart about how we go about maintaining the [Mississippi River] Delta and choosing our long-term priorities," Blink said. "And that includes keeping the quality of life up for as many people for as long as possible."

"I can’t remember the last time I caught a flounder," he said.

"Can we fish everywhere we used to? No," Lambert said in a recent telephone interview. "It changed our whole business model to fishing redfish; speckled trout customers don’t come here anymore."

In the 10 years since, he’s worked with other volunteers to plant a total of 20,000 bald cypress, black willow, tupelo gum and mulberry trees throughout the region. Just last month, he and a group of local high school students planted 160 bald cypress trees near Buras, La.

"We’re trying to hold the land together, to enhance it, to make it habitable for migratory birds — I’m sure they appreciate the mulberry out there," Blink said. The trees "really help to lower the storm surge," he added.

"I’ve lost friends because I was vocally supportive of some of those projects," Blink said, noting that the gains on some projects like sediment diversions "are somewhat nebulous."

"The impacts those projects would have on commercial fishing, recreational fishing — people didn’t always want to go out on a limb," he said.

Still, Blink said "a large number of people here — probably more than half — while they don’t want to take a social hit, are still quietly supportive [of such projects] because they appreciate the need for coastal restoration."

"They realize that society here can’t function without it," Blink added.

"I live in a pretty small town. Everybody knows everybody. I think I’ve always done things that were — I don’t want to say unusual — that caught people’s attention," he said. "I’ve always put myself out there and not necessarily worried about getting compensated for it, but just to do fun things and cool things that someday I can look back on my life and know that there isn’t grass under my feet unless I planted it there."

One of Blink’s more recent ventures is in training up the next generation of Louisianans to combat coastal erosion and land loss.

"I’m curious to see, in 30 to 40 years, who’s going to come out of that school and what they’re going to be doing," Blink said.

Blink said he contributed a unique component to the school’s winning design portfolio: the idea to situate the school on a barge.

"At first people laughed at us," he said. "But we wanted the school to be place resilient, that wouldn’t have to go packing every time a small tropical storm came through."

New Harmony isn’t positioned on a barge, yet. But Blink says the idea has gained traction.

"The local school superintendent told me he wished he could get all his schools out of harm’s way as easy as calling a tugboat," Blink said.

Blink’s official work with New Harmony ended after the concept won the XQ prize. But he stays in contact with school leaders and has given some of the staff tours of wetlands through his day job as owner of Delta Discovery Tours.

‘What doesn’t kill you makes you stronger’

Blink launched the tour company in 2015 as a way to offset expenses for tours and trips he was already leading out into the wetlands. He’s since built up a small fleet of boats and now takes business leaders, artists, journalists, scientists and "people who want to spend more time than they could get in an off-the-shelf boat tour" on trips into the Mississippi River Delta.

"It’s hurt," Blink said. "But I’m OK for now. A lot of charter fishermen are not doing so well right now."

Still, he’s optimistic that the industry will bounce back as it did after Hurricane Katrina pummeled the area in late August 2005 and after the oil spill ground things to a halt in 2010.

"Louisiana people are pretty resilient," Lambert said. "What doesn’t kill you makes you stronger. You kind of bounce out of it and keep on trucking."