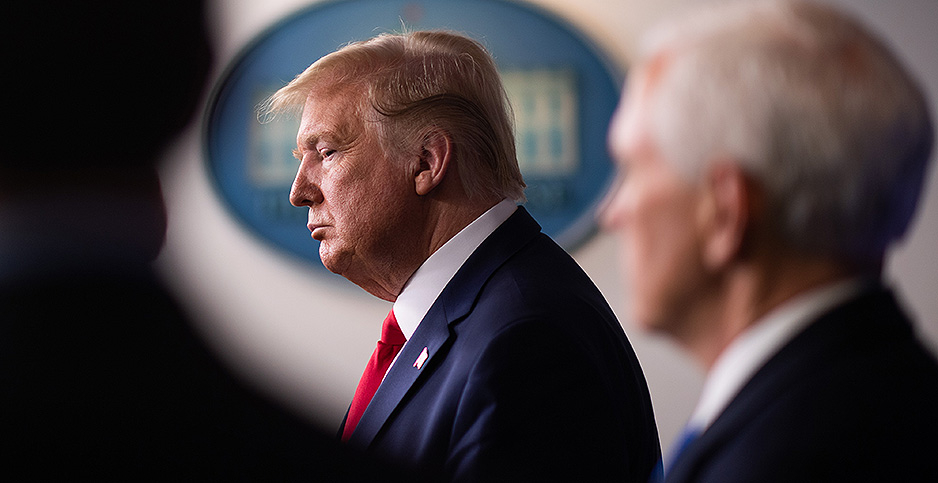 The Trump administration has a record of labeling warnings about national security risks as "alarmist." Now, as the consequences of White House inaction on the new coronavirus become clear, many experts say the administration’s habit of ignoring the threat of climate change could be more devastating.

On both climate change and pandemics, the Trump administration has been briefed often, sometimes by the same agencies.

"We assess that the United States and the world will remain vulnerable to the next flu pandemic or largescale outbreak of a contagious disease that could lead to massive rates of death and disability, severely affect the world economy, strain international resources, and increase calls on the United States for support," stated the report by Trump’s former National Intelligence Director Dan Coats.

It was published in January 2019 — about a year before the first coronavirus cases appeared in the U.S.

Lisa Monaco, President Obama’s national security assistant, ran a transition exercise on pandemics for Trump’s team a week before Trump was inaugurated. It offered lessons from the 2014 Ebola crisis and other outbreaks.

But despite these and other warnings from agencies like the Centers for Disease Control and Prevention and academic research institutions like Johns Hopkins Center for Health Security, Trump disbanded a White House office that would have coordinated the federal response to a pandemic.

He repeatedly proposed deep budget cuts for the agencies that are now on the front lines of the COVID-19 pandemic — a 12% reduction for the Department of Health and Human Services in fiscal 2020 and a 10% cut for the CDC for fiscal 2020.

As crisis loomed, Trump discouraged his public health advisers from offering him pessimistic projections of the risk of the virus, Politico reported. Meanwhile, he suggested that early U.S. cases would dwindle and finally disappear "like a miracle" as spring set in.

That’s not what happened. In March, as cases proliferated, his message changed. He said the pandemic was an "unforeseen problem" that "nobody expected."

"Our government broadly, writ large, the folks who do this work are constantly in tune with what the scale of the threat could be," she said.

To the public health community, a pandemic like COVID-19 was not only plausible, but likely.

"Our nation’s public health and health care communities have been planning for these disasters in earnest since post-9/11 and the anthrax attacks," said Suzet McKinney, CEO of the Illinois Medical District. She said a pandemic could be expected every 50 to 60 years.

Even as he fields criticism for the late start that resulted in a lack of testing capacity and a missed chance to contain the illness, Trump remains resistant to bad news.

After Treasury Secretary Steven Mnuchin said Wednesday that unemployment could reach 20% due to the outbreak, Trump waved the prediction away.

"That’s an absolute, total worst-case scenario," Trump told reporters at a White House briefing. "But no, we don’t look at that at all."

Trump’s dismissal of worst-case scenarios also applies to climate change. The chief way agencies inform the president and the public about global warming is through the National Climate Assessment. It’s published every four years with input from experts at 13 federal agencies.

The 2018 edition grabbed headlines for predicting that warming could cause the U.S. economy to shrink by 10% by the close of this century and lead to deaths from heat-related illnesses, viruses and respiratory disease.

The report came as agencies like EPA were in the process of rolling back emissions rules and plans for adapting to climate change. Andrew Wheeler, who was then EPA’s acting administrator, chose his line of defense early.

"I think a lot of the criticism that you’re seeing from the Trump administration on the report is the emphasis from the media on the ‘worst-case’ scenario," Wheeler said at a Washington Post event held days after the report’s release.

Since then, Wheeler has continued to decry the use of "worst-case" and "extreme" scenarios in scientific assessments and to blame them for feeding critical media accounts and alarming the public.

He surprised environment ministers from the Group of Seven countries by bringing the issue up at a summit in Metz, France, last year, where the agenda had been carefully scrubbed of climate change for the benefit of the U.S.

He has continued to pound it at congressional hearings and press interviews, including to a Brazilian newspaper during a trip there last month. And he promised that as work gets underway on the next National Climate Assessment, it will include moderated climate modeling assumptions that will deliver tamer — or, in his view, more realistic — predictions of climate outcomes.

Federal climate modelers are scheduled to meet in the coming month to discuss inputs for the 2022 edition of the climate assessment.

To some experts, the coronavirus shows exactly why the government should be preparing for worst-case scenarios of climate change.

On Sunday night, as stock futures dropped and many Americans settled in for a week of social isolation, NASA climate modeler Gavin Schmidt commented on Twitter: "This probably doesn’t need to be said, but planning for low probability, high impact, worst case scenarios is looking pretty smart right now."

"When you’re planning for what can happen, you have to plan for all plausible eventualities and even ones that aren’t so plausible," Schmidt, the director of the NASA Goddard Institute for Space Studies, told E&E News.

When Wheeler talks about "extreme" or "worst-case" climate scenarios, he means Representative Concentration Pathway 8.5, or RCP 8.5, which broadly tracks with 5 degrees Celsius of warming, or 9 degrees Fahrenheit.

His argument rests on a debate within the climate modeling community over whether it’s still a business-as-usual scenario — as it was in 2007, when it was first built — or whether national mitigation programs and market shifts away from coal-fired power have rendered it overly pessimistic.

‘Bad luck’? It could happen

There’s evidence that the world is no longer on track to see 5 C of warming, at least by the end of this century.

A paper in Nature in January argued that RCP 8.5 has gone from providing a snapshot of the world’s likely climate trajectory to being a warning of what could happen if human emissions veer dangerously upward or if natural feedback loops or climate sensitivity exceed what scientists currently predict.

"There’s no path that is a default," said Schmidt. "Any path that we make is going to be the sum total of many, many decisions on all sorts of levels."

Economic patterns could change, he said, or a factor that scientists haven’t accounted for — like higher-than-expected rates of permafrost melt — could supersize atmospheric greenhouse gas concentrations. That could make RCP 8.5 a reality.

"If we could end up there through a combination of bad policies and bad luck, then we need to be prepared," Schmidt said.

Zeke Hausfather, a researcher at the University of California, Berkeley, who co-authored the Nature paper, said climate modelers should keep RCP 8.5 in their "back pocket."

"Sometimes there are black swan events that nobody really predicted that can change things a lot," he said.

Being aware of low-probability, high-risk scenarios can aid planning, Schmidt said. For example, if 1 meter of sea-level rise is expected but 2 meters is possible, a planning authority would be well-served to consider building a sea wall 2 meters high to ensure its investment isn’t wasted.

Peter Frumhoff, director of science and policy at the Union of Concerned Scientists, called Wheeler’s obsession with "extreme scenarios" and "worst-case scenarios" a "red herring."

"Even planning for high-probability, high-impact, medium-case scenarios is looking pretty good right now," said Frumhoff. "And we’re not doing that, either."

COVID-19 was not a worst-case scenario. Report after report warned that something like the current outbreak was predictable, if not likely.

And while climate modeling experts are reassessing the likelihood that warming this century will exceed 5 C, there’s no debate that the world remains on track to see more than 3 C of warming.

And that could be damaging enough.

The same 2018 assessment Wheeler decries for its use of "extreme scenarios" actually uses three more moderate scenarios to show the possible outcomes of different atmospheric concentrations of greenhouse gases, leading to different degrees of warming.

The report notes that under an RCP 8.5 scenario — which is associated with 20 to 38 inches of sea-level rise — "many coastal communities will be transformed by the end of the century."

But under RCP 4.5 and RCP 2.6, milder scenarios that assume countries will do more to address warming than they committed to do, the report says, "Many individuals and communities will suffer financial impacts as chronic high tide leads to higher costs and lower property values."

Instead of planning for those outcomes, the White House has proposed barring federal agencies from considering the effects of climate change when it reviews projects and decisions under the National Environmental Policy Act.

Wheeler and his predecessor, Scott Pruitt, have presided over the rollback or significant weakening of EPA climate rules for power plants, vehicle emissions, and oil and gas methane.

EPA officials have said the task force responsible for setting assumptions for the last National Climate Assessment was directed by Obama political appointees, who, they say, were concerned with making the effects of climate change look as dire as possible to justify regulation. But Joe Goffman, EPA’s top lawyer on air and climate under Obama, said it was run by career staff.

He saw Wheeler’s suggestion that the Trump administration would change criteria for the next assessment report as evidence of political tampering.

"What Wheeler is asking for is actually a planning process that would willfully blind the decisionmaker to the possibility of a worst-case scenario, which by definition fouls the decisionmaking process," said Goffman.

The White House’s rosy view of America’s vulnerability to pandemics is coming into focus.

McKinney, of the Illinois Medical District, said states remain dependent on the federal government to coordinate supply lines for masks and other protective clothing for health care workers, ventilators for the seriously ill, and even for food and fuel when supply chains are disrupted.

Trump on Monday told governors they’d have to secure their own ventilators.

Aaron Bernstein, a pediatrician who heads the Center for Climate, Health and the Global Environment at Harvard University, said federal leaders should cope with genuine uncertainties about public health or climate change threats by weighing the consequences of action against those of inaction.

"With climate change it’s really easy," he said. "Inaction is by far the greatest risk."