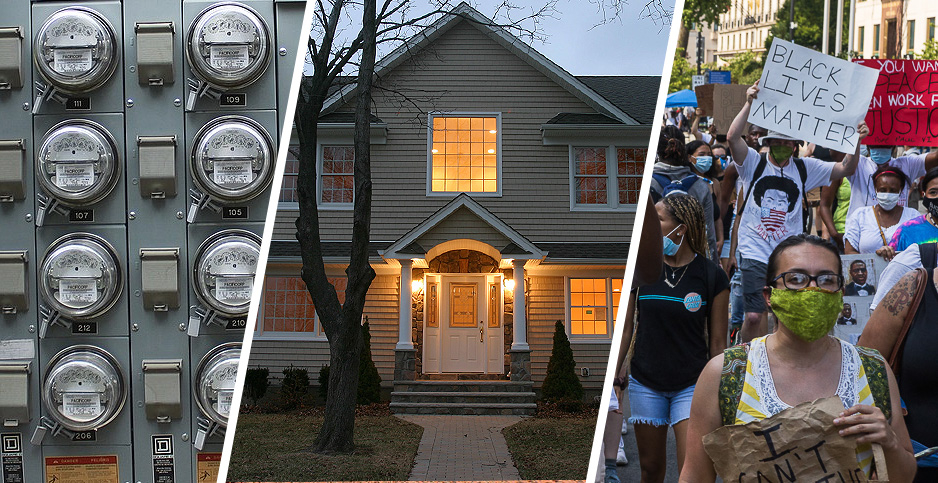 As the threat of customer shut-offs reemerges, U.S. power companies are being viewed in the context of their own push for racial and social justice. pat_loonytoon/pixabay(meters); Steven Tom/Flickr(house); Francis Chung/E&E News(protesters)

They may not march with Black Lives Matter, but you wouldn’t know it from the tone struck by chief executives of some of the largest U.S. electric companies.

The loss of electric service hasn’t been a threat in recent months for a large chunk of residential customers because of moratoriums prohibiting shut-offs for not paying. In some cases, utilities voluntarily agreed to the standards. Elsewhere, they were mandated by states. Still other power providers didn’t fall under state utility commission orders.

The National Energy Assistance Directors’ Association recently estimated that about 55% of the U.S. population was not covered by a state-ordered moratorium on utility shut-offs. Some 28 states have an expired moratorium or none at all, though certain electric utilities may avoid shut-offs of residents even without a mandate. Eleven other state moratoriums are scheduled to expire by mid-October with certain caveats, NEADA said. Electric companies must figure out how to recoup or compensate for potentially billions of dollars of late or unpaid bills as the effects of COVID-19 are felt across the country.

"The resumption of disconnections couldn’t come at a worse time," Howat said. "We have millions of households that are facing severe financial difficulties."

"There has to be legislation and policy in every single state to save people’s lives," said Stacey Champion, a consumer advocate in Arizona who has criticized utility leaders and regulators over past shut-offs potentially linked to deaths in that state.

Southern Co.’s homepage took on a new look last week. The words "Be The Change" and "Racism has no place in our company and communities" are emblazoned across the Atlanta-based energy company’s main site next to a photo of a Black child.

"That was pre-COVID, so you can imagine how much higher it is now," said Mandy Mahoney, the group’s president.

Meanwhile, the share of monthly income going to utility bills is roughly three times that for poor people than it is for others, William Bryan, SEEA’s Built Environment project manager, said in a recent interview with E&E News.

"COVID has been making this worse," he said. "It’s very difficult for households to save money at this time. It’s hard to dig out of this debt."

No one wants companies’ bad debt to be written off, said Kurt Ebersbach, a senior attorney with the Southern Environmental Law Center. If that happens, utilities could pass those costs along to all customers, and people who can’t pay could still be disconnected.

"I think they would agree it’s in their interest to have as many customers remain customers," said Ebersbach.

Some critics say power companies aren’t doing enough to protect their customers, including those in predominantly Black communities hit hard by the coronavirus pandemic.

Nathaniel Smith, the group’s founder and chief equity officer, wonders why it’s taking a nonprofit to do that work when an electric company with deep pockets can do the same or more.

"We’re concerned about our constituents losing our electricity," he said in an interview with E&E News. "I just think that we have to keep fighting, and we have to keep elevating the issue."

In Texas, regulators issued orders to prevent customers in the competitive market from seeing their power shut off if they enrolled in a relief program or a deferred payment plan, though the Public Utility Commission of Texas wasn’t able to provide demographic data on those affected.

The agency’s program has included more than $30 million of financial assistance and has protected about 600,000 households from disconnection for nonpayment, according to Andrew Barlow, a PUC spokesperson. As of next month, the commission said, disconnections for nonpayment can resume for customers in the program who have been given advance notice.

Next door, the Louisiana Public Service Commission sent questions to utilities about the effects of COVID-19, including how many customers were in arrears before and after a March 13 state executive order that barred cutting service over unpaid bills. The moratorium expired in mid-July, and many details about those who were helped aren’t publicly available.

But it doesn’t track how many low-income customers lack assistance, a number likely rising given the economic downturn, according to Bill Freeman, director of the Office of Home Energy Programs at the Maryland Department of Human Resources.

"It’s a tough thing right now because there are a lot of newly eligible people," he said.

While Republican Gov. Larry Hogan’s moratorium was initially set to expire on Sept. 1, Maryland’s PSC moved to prohibit service terminations through Nov. 15 following a hearing to examine the impacts of COVID-19 on customers last month.

New Jersey’s Board of Public Utilities does not require reporting of residential disconnections, though spokesperson Peter Peretzman said most utilities share monthly information on disconnections anyway.

Those sources of assistance include the Coronavirus Aid, Relief and Economic Security (CARES) Act, which provided an increase in federal Low Income Home Energy Assistance Program funding and allowed customers to qualify for $600 a week extra for unemployment during certain months. Local governments and utilities contributed additional funding in various places, and there’s the potential for more federal aid and unemployment money.

One example is the $3 million Clean Slate program, available to those who earn up to 250% of the federal poverty level, or no more than $65,500 annually for a family of four. Under the program, customers who pay 25% of their past due balance can have the remainder forgiven. Oglesby said the utility only turns off a customer’s service when it runs out of options.

"That is our absolute last resort," she said. "Usually when it happens it’s the result of a customer not taking any action to engage with us."