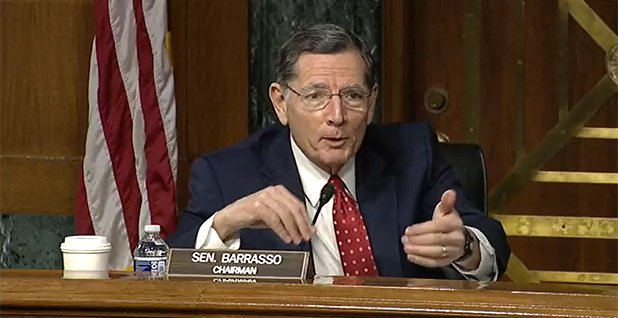 The compromise bill, S. 4897, would throw a financial lifeline to struggling reactors across the country, recognizing their contribution to fighting climate change.

Even though the bill is unlikely to pass this Congress because of the shrinking legislative calendar, today’s action may provide momentum for quick consideration next year.

Sponsors this morning touted the legislation’s ability to help the existing nuclear fleet better compete in electric markets through an EPA-led credit program that would reward struggling plants for their carbon-free benefits.

The bill would authorize a national uranium reserve, as envisioned by the Trump administration, to help secure U.S. uranium supplies and buttress the struggling mining sector.

It also looks to streamline the Nuclear Regulatory Commission review process for advanced reactor licensing, among other areas, to promote developing nuclear technology.

Originally floated as a draft bill in the summer, the original text drew little support on the Democratic side.

Barrasso and ranking member Tom Carper (D-Del.), however, found compromise on the EPA credit program and how the bill addresses NRC licensing.

"Supporting nuclear energy and advanced nuclear technologies is a high priority for me, so I am grateful for the chairman’s willingness to help us get to yes on this legislation," Carper said.

The committee approved an amendment from Sen. Ben Cardin (D-Md.) to extend the time frame when existing reactors could claim the EPA climate credit from two to four years.

Experts worry that some of the nuclear fuels used for next generation reactors could expose the supply chain to safety and weapon concerns.

The amendments secured even more Democratic backing. And in a positive sign for the bill’s chances next year, future EPW top Republican Shelley Moore Capito of West Virginia, signed on as a co-sponsor, Barrasso said.

Sen. Ed Markey (D-Mass.) questioned the utility of doubling down on a technology — nuclear — that has proved costly and difficult to construct.

His comments followed a letter from 118 environmental groups — including Friends of the Earth and the League of Conservation Voters — opposing the bill for the potential to block out renewable energy sources in favor of unproven advanced reactor technology and the existing nuclear fleet (E&E Daily, Dec. 2).

"Inside this bill, there is a cash bailout of our nation’s most decrepit and uneconomic nuclear power plants — a bailout that could cost more than $1 billion," Markey said. "This isn’t cash for clunkers; this is clunkers getting cash."

Such opposition could prove troublesome. Markey said expanding the bill to cover renewable energy incentives could secure his support. Those credits have proved controversial, with conservatives vowing to undo them as soon as possible.

Some power groups have also begun to lobby Congress to focus on more fuel-neutral climate programs to ensure the competitiveness of wholesale electric markets.

"As the cost of renewable and other low-emitting resources continues to decline, all energy technologies and resources should be able to compete in a fair, transparent marketplace to deliver least cost, efficient and reliable power generation solutions," Todd Snitchler, CEO of the Electric Power Supply Association, said in a statement opposing the bill last night.