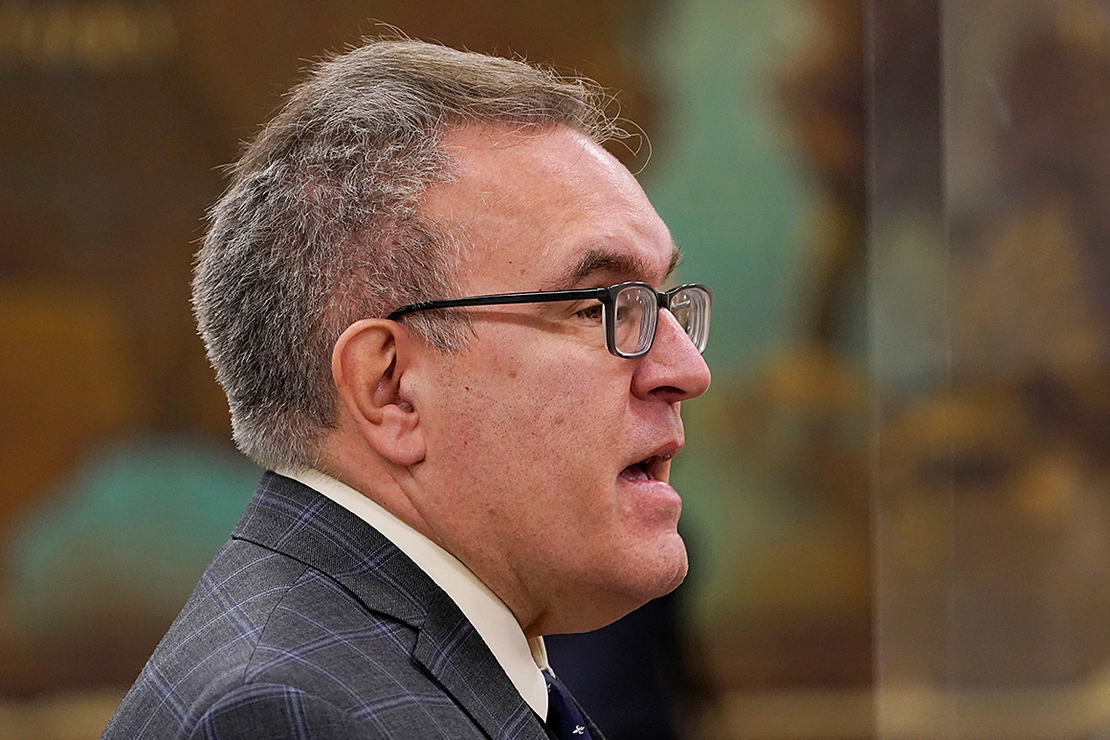 The Privileges and Elections Committee voted 9-6 to remove Wheeler from a list of appointees to Gov. Glenn Youngkin’s (R) Cabinet, with all Democrats voting in favor of removing him and all Republicans opposed. The panel then voted 15-0 to confirm the rest of Youngkin’s picks.

The vote came after weeks of pressure by environmentalists, liberals, the main union of EPA employees and others pushing the state senators to block Wheeler due to his record of environmental rollbacks while working for former President Trump from 2018 to 2021. Sen. Adam Ebbin (D), the panel’s chair, said his office had received more than 500 letters from constituents opposing Wheeler, a former energy lobbyist whose clients included a coal mining company. Lawmakers also received letters in support of him.

“We received a letter from 150 former EPA employees who suggested that Mr. Wheeler had undermined the work of the EPA and worked against the environmental interests of this country,” Sen. Creigh Deeds (D) said at the committee meeting this afternoon at the state Capitol in Richmond, referring to a letter sent last month (Greenwire, Jan. 14). Deeds had proposed the motion to strip Wheeler’s name from Youngkin’s confirmation resolution.

“We think that members of his governor’s Cabinet ought to be people that unite us as Virginians, and certainly the secretary of natural and historic resources ought to be one that we have confidence in in terms of working for the preservation and conservation of our natural and historic resources,” Deeds continued. “And on this side of the aisle, we just don’t have that level of confidence with this nominee.”

Sen. Bryce Reeves (R) pushed back on Deeds’ characterization, listing some of Wheeler’s accomplishments, focusing on actions that benefit the Chesapeake Bay and air pollution.

“I can go on and on and on. It’s just a difference of opinion,” Reeves said, pointing to the 9-to-6 partisan makeup of the panel.

Youngkin is “disappointed” with the Senate panel’s decision, a spokesperson said after the vote.

“Andrew Wheeler is a highly qualified individual with an extensive background on natural resources and issues critically important to Virginians,” spokesperson Macaulay Porter said in a statement. “The Governor is disappointed that the committee put partisan politics over the selection of an experienced public servant who would prioritize cleaning up the Chesapeake Bay and James River.”

The Virginia League of Conservation Voters, however, said the panel made the “right call.”

“Andrew Wheeler is unfit to lead Virginia’s environmental agencies,” said Michael Town, the organization’s executive director. “We hope the Youngkin administration can find a replacement secretary who actually has a demonstrable record of caring about environmental protection, not working to undermine safeguards that protect clean air, clean water and our health.”

Wheeler’s opponents have accused him of working to slash funding for the Chesapeake Bay and other EPA programs important to Virginia, while also pointing to his broader record of rolling back regulations on climate change, air pollution, water pollution and other areas. He testified before a pair of General Assembly committees last week to defend his record (Greenwire, Jan. 26).

Dozens of former Trump administration colleagues of Wheeler defended his record in their own letter this week, urging lawmakers to confirm him (Greenwire, Jan. 31).

Wheeler started serving in the job that oversees Virginia’s environmental and natural resources agencies last month, but he needs approval from both the Senate and House of Delegates to stay on.

The confirmation resolution can now be considered by the full Senate, where Democrats hold a slim 21-19 majority. Lawmakers there can either pass the resolution without Wheeler’s name — thus sinking his job — or could vote to return his name to the legislation. If one Democrat crosses the aisle to save Wheeler, Lt. Gov. Winsome Sears (R) could break the tie for the GOP.

Wheeler is likely to have an easier time in the House, where the GOP holds a comfortable majority.

Blocking a Cabinet official is a rare occurrence in Virginia, but it is not unprecedented. Deeds today pointed to Danny LeBlanc, a former union official whom Republicans blocked in 2006 from being secretary of the commonwealth under then-Gov. Tim Kaine (D).