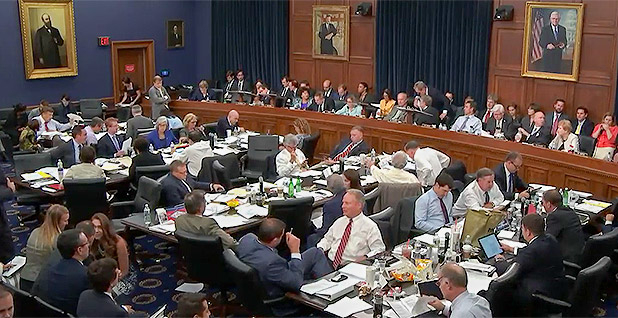 The legislation, which passed 31-21, would allocate a total of $54 billion to the Commerce and Justice departments, the National Science Foundation and NASA. That’s $2.6 billion below fiscal 2017 levels. The funding for NOAA, housed in Commerce, would amount to a $710 million cut.

Appropriators approved reducing climate research at the agency by 19 percent, which concerned many committee Democrats. The bill would provide $128 million for the research, down from $158 million.

Ranking member Nita Lowey (D-N.Y.) said the cut is "further proof that the Republican majority does not take the science of climate change seriously or have any intent to combat one of the great threats of our time."

The committee carved out $65 million for the salmon recovery fund and $63 million for the Sea Grant initiative, which supports research at 33 universities nationwide. The White House budget wanted to slash the Sea Grant program, but appropriators decided to give it the same level of funding it received in fiscal 2017.

Appropriators also chose not to follow the administration’s recommendation to gut the National Estuarine Research Reserve System, instead providing funding at the fiscal 2017 level, approximately $23 million.

"The NERRS is an important partnership between NOAA and the coastal States that is crucial for protecting and studying estuarine systems," the committee report on the bill said.

"Unfortunately, the House [committee spending bill] retains some of the more egregious cuts from the Trump budget," Haughey added, citing the 50 percent cut to the coastal management grants program, which "empower coastal states to protect the invaluable ocean resources in their backyards, have a say in how federal agencies manage the ocean right of their shores, and keep communities safe from ocean and weather hazards."

Together the two programs typically have constituted the coastal management grants budget line in spending legislation. The administration recommended zeroing out both programs.

They included $775.8 million for JPSS in fiscal 2018, a series of satellites that will circle the Earth from pole to pole, gathering atmospheric, weather and climate data. The GOES-R Series program would receive roughly $518.5 million.

An unsuccessful amendment offered by Democratic Reps. José Serrano of New York and Henry Cuellar of Texas to prohibit the federal government from seizing private property to build a wall along the U.S.-Mexico border generated some controversy during the markup.

Rep. John Culberson (R-Texas), chairman of the Commerce, Justice, Science and Related Agencies Appropriations Subcommittee, said the measure didn’t belong in the CJS bill. The amendment, similar to others Democrats have floated in recent days to different bills, failed in a 21-31 vote.

Another amendment that failed would have restored $30 million for climate research at NOAA. "I appreciate Chairman Culberson’s effort to retrench some of the funding, but it doesn’t go far enough," said sponsor Rep. Matt Cartwright (D-Pa.).

Culberson said he would "do all I can to continue to support NOAA" but that "without a spending offset" to pay for the amendment, "it would prevent our bill from reaching the floor."

Serrano also unsuccessfully tried to add language that would have reversed cuts to coastal management grants as part of a larger amendment to add $1.7 billion to the CJS bill. It failed in a 22-30 roll call vote.

Culberson reiterated during the markup that the House will have to come up with a broad, far-reaching budget deal if appropriators hope to boost funding for NOAA programs and the National Science Foundation.

The NSF would be cut by $133 million, to $7.3 billion, under the bill. Still, the number is higher than President Trump’s budget request, which would have funded NSF at $6.7 billion.

The Trump plan prompted outrage from House Democrats, who noted it was the first time in 60 years a president submitted an NSF budget with a spending request lower than the previous fiscal year’s.

The agency funds a variety of climate, energy and polar research, including the Ocean Observatories Initiative, a network of sea sensors intended to advance learning on issues like ocean acidification.

The committee allocated $6 billion for research and related activities at NSF. Rep. David Price (D-N.C.) introduced a failed amendment that would have boosted funding for the agency by $604.2 million.

Also in the bill is a provision that would bar the Justice Department from entering into settlement agreements that require donations to third parties. The language appears to track a memo issued by Attorney General Jeff Sessions in June.

Environmentalists say that the rider would block money from going toward environmental projects. It would have barred, for example, a stipulation in the government’s settlement with Volkswagen AG over the recent diesel emissions cheating scandal that required the German automaker to fund electric vehicle infrastructure (Greenwire, June 7).

Separately, the State and Foreign Operations Appropriations Subcommittee approved by voice vote its fiscal 2018 proposal. Members offered no amendments and debate was limited, as is generally the case at the subcommittee level.

The bill includes provisions to prevent money from going to the U.N. Green Climate Fund and the Intergovernmental Panel on Climate Change (E&E News PM, July 12).

Lowey decried the absence of funds for climate action. She and other Democratic members said they would offer amendments when the bill reaches full committee as soon as next week.

The legislation would reduce funding for the State Department and foreign operations by $10 billion, down from about $57.4 billion in fiscal 2017. Still, the cuts are not as deep as those in Trump’s proposal, which included roughly $37 billion for State.

The Appropriations subcommittee with jurisdiction over the Labor Department yesterday approved legislation that would cut the Mine Safety and Health Administration by $14 million, pointing to "lower levels of mining across the country and especially in coal production."

The full committee later approved legislation to fund financial services regulators and other government entities, including the Office of Management and Budget.

The legislation includes a rider to roll back Obama-era limits on funding for overseas power plans. Another rider would prevent OMB from reviewing Army Corps of Engineers water resource projects.