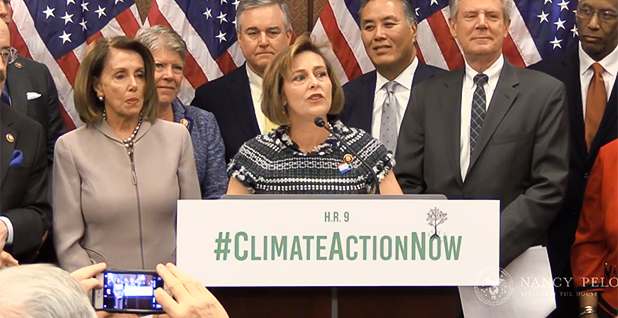 House Select Committee on the Climate Crisis Chairwoman Kathy Castor (D-Fla.) during a press conference with Speaker Nancy Pelosi of California and other top Democrats. More climate hearings are set for this week, and the full House will consider H.R. 9 to keep the United States in the Paris Agreement. Pelosi/Facebook

The House will return this week to another barrage of climate messaging, including a vote on leadership’s bill to keep the United States in the Paris climate agreement, a move Republicans are expected to loudly oppose.

After a rushed rollout earlier this month, H.R. 9 is destined for a quick death in the Senate, but it will mark the first piece of climate legislation Democrats will pass since winning the House in November.

While the Green New Deal has sucked the air out of the room during the last few months, H.R. 9 represents a more modest attempt by leadership to unify the Democratic caucus.

The bill would bar the Trump administration from using funds to withdraw from the Paris Agreement and require it to come up with a plan to meet the original U.S. emissions targets within 120 days.

Select Committee on the Climate Crisis Chairwoman Kathy Castor (D-Fla.), whose committee will hold its second hearing tomorrow, is the lead sponsor.

The bill does not lay out specific policies to meet the Paris goal of reducing emissions 26 to 28 percent from 2005 levels by 2025, and it does not go as far to address climate change as some in the caucus would have liked.

Leadership rushed the bill to the floor, with some Democratic staff finding out about H.R. 9 shortly before its announcement during a late March press conference (Greenwire, March 27).

Then, as the Energy and Commerce Committee marked up the bill earlier this month, Chairman Frank Pallone (D-N.J.) lamented leadership was pushing for a bill in the last week of April, forcing his panel to consider it more quickly than he would have liked. Ideally he said he would have held more thorough legislative hearings, though the committee of primary jurisdiction on H.R. 9 is Foreign Affairs.

Still, most members and staff have said the bill is an easy way for Democrats to show they’re committed to addressing climate change early in the 116th Congress. More comprehensive measures, they say, will come during the next two years as Democrats develop a platform.

"I can accept the fact that it came together in a little bit of an improvised way perhaps, but I like the product, and it’s the right thing to do," Rep. Jared Huffman (D-Calif.) said in an interview.

It’s clear that the environmental community, and rank-and-file members, are expecting more action on climate policy to come after H.R. 9.

The path forward is likely a variety of smaller measures on climate and energy efficiency in the coming months while the committees look for the best way to push more ambitious policy.

"It’s not the only thing we need to do," Huffman said. "There’s a lot more, but it’s timely, and it’s important."

On the other side of the aisle, Republicans are expected to make their own show out of H.R. 9.

They’ve already filed a tranche of proposed amendments with the Rules Committee, much as they did when the bill was considered in Foreign Affairs and Energy and Commerce, aimed at calculating economic effects and stressing the importance of natural gas and nuclear

One proposal from Rep. Markwayne Mullin (R-Okla.) would prevent the bill from taking effect until the Energy secretary certifies that China and Russia have committed to the same emissions reductions as the United States.

It takes to heart a common GOP talking point about Paris — that China, Russia and India are not doing their fair share to reduce emissions.

Another amendment, from Reps. John Shimkus (R-Ill.) and Michael Burgess (R-Texas), would require the Energy secretary to certify that gasoline and energy prices would not go up under the terms of the Paris Agreement.

Lawmakers have filed several other versions of that amendment, all of which are likely to be rejected.

And an amendment from Rep. Bill Flores (R-Texas) would attach the entire text of the Green New Deal to the bill.

The Rules panel will meet on the measure this afternoon, and while it’s unclear which amendments they will allow for floor consideration, Flores’ measure won’t be the only attempt this week to force a vote on the progressive climate plan.

Rep. Jody Hice (R-Ga.) is planning to file a discharge petition tomorrow on the Green New Deal, an ambitious outline to reduce emissions from Rep. Alexandria Ocasio-Cortez (D-N.Y.). That effort, however, is unlikely to garner the 218 signatures needed to bring it to the floor.

Another possibility for Republicans would be to force a vote on the Green New Deal or another measure via a motion to recommit, which they have used successfully in the past.

When the House voted in February on H.R. 8, the Democratic gun control bill, the GOP used a motion to recommit to tack on language targeting illegal immigrants who attempt to purchase firearms.

A spokeswoman for Minority Whip Steve Scalise (R-La.) said the office does not comment on future motions to recommit.

But while the vote on H.R. 9 is likely to be mostly along party lines, Democrats are hoping to get some defections among the handful of Republicans who support the Paris Agreement.

One possibility is Rep. Brian Fitzpatrick (R-Pa.), who is the only GOP co-sponsor of a Democratic resolution supporting the Paris Agreement (E&E News PM, Feb. 8).

And the vote on H.R. 9 will come amid revived interest in climate change in the Republican Senate.

Sen. Lindsey Graham (R-S.C.) said in Texas last week that the GOP needs to "cross the Rubicon" on climate, adding that Republicans are developing climate legislation that will likely center on natural gas and energy efficiency (Energywire, April 26).

Meanwhile, the Select Committee on the Climate Crisis will hold its second hearing tomorrow morning in what could be a preview of the panel’s more substantive work.

Their first meeting brought in youth climate leaders to testify, but it also had plenty of the partisan fights and posturing that have long been featured in congressional climate debates.

During the "Solving the Climate Crisis: Drawing Down Carbon and Building Up the American Economy" hearing, lawmakers will hear testimony from four witnesses, including Diana Liverman, a professor of geography at the University of Arizona who was a lead author on the most recent U.N. Intergovernmental Panel on Climate Change report.

The Oversight and Reform Subcommittee on Environment will also meet for its second climate hearing of the year tomorrow, discussing the public health effects of climate change.

Schedule: The Select Committee hearing is Tuesday, April 30, at 10 a.m. in TBA.

Schedule: The Oversight and Reform Subcommittee hearing is Tuesday, April 30, at 2 p.m. in 2154 Rayburn.