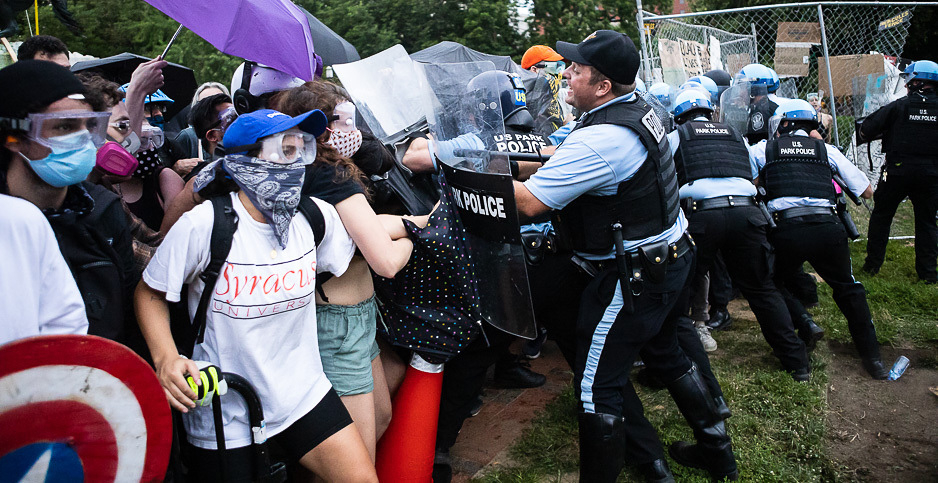 House lawmakers plan to broaden their probe of the U.S. Park Police this week after discovering that there’s no official audio recording of the department’s violent clash with protesters near the White House on June 1.

While those records are usually available for investigators who want to review police misconduct, the Park Police said its radio communications system was not working that evening, when officers used pepper bombs, smoke canisters and batons to chase out protesters and clear a path for President Trump to pose for photographs outside Lafayette Square.

For Rep. Raúl Grijalva (D-Ariz.), chairman of the House Natural Resources Committee, the explanation does not add up.

"Trump administration officials ordered the attack on clergy, nonviolent protesters and working members of the press — for the official audio record of that day to now turn up missing has every appearance of a cover-up," Grijalva told The Washington Post, which first reported the story.

Grijalva will get a chance to push for answers tomorrow when his committee holds its second hearing on the subject, titled: "Unanswered Questions About the U.S. Park Police’s June 1 Attack on Peaceful Protesters at Lafayette Square."

At the first hearing last month, Grijalva called the police actions an "indefensible attack" against protesters who were demanding justice after the Memorial Day killing of George Floyd, an unarmed Black man who died while in the custody of Minneapolis police (E&E Daily, June 30).

"Astonishingly, instead of honoring this collective outcry for justice, this administration answered demands to end police brutality with more police brutality," Grijalva said.

He criticized acting Park Police Chief Gregory Monahan for skipping last month’s hearing and is hoping he shows up tomorrow to answer questions from lawmakers. A press advance sent out Friday night indicates Monahan is expected to attend the hearing.

"The American people deserve firm, clear answers from the administration about who issued what orders that day, where those orders ultimately came from and why these recordings are mysteriously unavailable," Grijalva told the Post.

The Park Police and National Park Service did not respond to requests for comment, but Park Police Lt. Jonathan Hofflinger told the Post that its problems with its equipment have been resolved.

"At the conclusion of the demonstrations, we discovered that the radio recorder was not working and did not record any transmissions," he said. "However, written radio logs were generated as a redundant practice. This recorder issue has since been rectified."

Even without the official police audio, there’s plenty of evidence for investigators.

Last month two Park Police officers were reassigned after video showed them in riot gear attacking two Australian journalists as they were doing a live television broadcast on H Street, right next to the park (Greenwire, June 4).