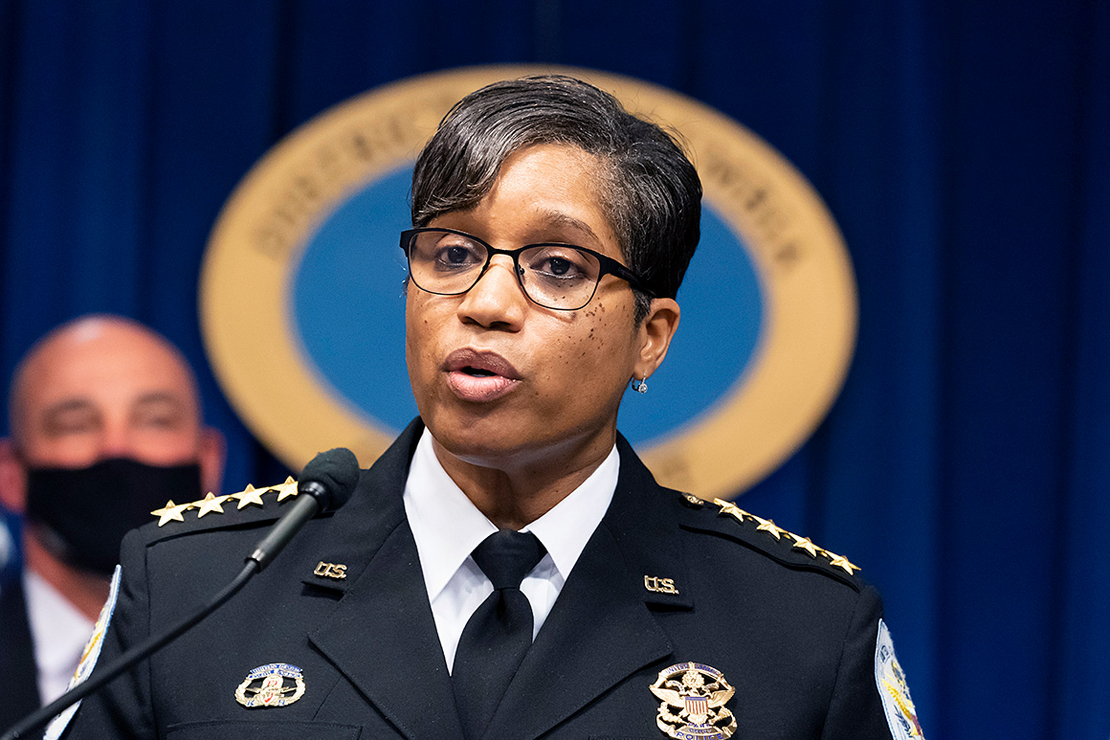 U.S. Park Police Chief Pamela Smith speaking during a February news conference. Smith announced she will retire at the end of the month. Alex Brandon/AP Photo

The persistent U.S. Park Police leadership woes have heated up again, with the abrupt announcement last Friday by Chief Pamela Smith that she will retire effective April 30.

The first Black chief at the 230-year-old agency, Smith has only held the high-stress, high-profile job for a little more than a year. She was appointed in February 2021, following the sometimes rocky tenure of acting Chief Gregory Monahan.

“It has been my distinct honor and privilege to cap off my career as the Chief of the United States Park Police after spending my entire career within its ranks,” Smith said in a statement.

Smith added that she was “proud of the dedication and professionalism of the entire workforce as we continued to meet the demands of a modern law enforcement organization.”

Deputy Chief Christopher Stock will serve as the interim chief.

National Park Service Director Chuck Sams said in a statement that “I respect her decision and congratulate her on her retirement.”

“The gross negligence and mismanagement caused by the NPS and USPP has been ongoing consistently over multiple administrations, under both parties, to a point where the public is simply not safe in the areas that the USPP is required to protect, defend and serve,” the complaint states.

The Park Police as of March had 494 sworn officers, which the bargaining unit said was a deficit of 165 law enforcement officers.

“As a result, as of February 20, 2022 … Smith made the decision to cancel all sign off-days for USPP law enforcement officers to try to fill the massive holes in even bare minimum law enforcement coverage,” the complaint states.

Interior declined further comment this morning. With details about Smith’s retirement decision remaining under wraps, lawmakers did not offer any public reaction to the decision.

The Biden administration’s fiscal 2023 National Park Service budget request asks for $400.8 million for overall law enforcement and protection, a $39 million increase that would bring in an additional 164 employees, including 72 for the Park Police.

Smith took the chief’s job after rising through the ranks, through positions that ranged from patrol officer, Federal Law Enforcement Training Center instructor, commander of the New York Field Office and deputy chief for the Field Operations Division.

She rose to the top job after Monahan, who had overseen the agency in an acting capacity since 2019, drew Capitol Hill criticism over his handling of the June 1, 2020, protest at Lafayette Square near the White House that erupted into violence. House Democrats and other critics said the Park Police used excessive force in chasing away protesters before then-President Donald Trump crossed the street to pose for photographs in front of St. John’s Episcopal Church (E&E News PM, June 9, 2021).

A report by Interior’s Office of Inspector General last year said the clearing of protesters wasn’t done specifically to benefit Trump’s desire to go to the church. That report, however, did not address individual allegations about officers’ use of force and did find flaws in the Park Police response (Greenwire, June 9, 2021).

Smith, too, has been pressured from both inside and outside the agency almost since the day she took the job.

In March, Georgia Rep. Jody Hice, the ranking Republican on the House Oversight and Reform Subcommittee on Government Operations, announced he was looking into the Park Police management.

“Despite their critical mission, I fear they have not been prioritized by DOI leadership for several years, leading to acute staffing shortages and safety concerns,” Hice told Interior Secretary Deb Haaland.

Hice’s probe began after the Office of Inspector General issued a critical report saying the Park Police was operating its Washington dispatch center “with significant safety concerns and other deficiencies,” including outdated equipment (Greenwire, Feb. 25).

The IG said birds had been allowed to enter the dispatch center, server rooms and adjacent offices through holes in the roof, leaving furniture and computer equipment covered in droppings. Employees also suspected there was black mold.

The OIG report also blasted the Park Police for running the center with too few workers, noting “longstanding staffing and training deficiencies” and saying that earlier complaints by officers had been ignored.

“I am dismayed by the unacceptable conditions I saw during a personal inspection of the facility in recent months and that were documented by the Inspector General (IG),” Smith said in a statement, adding she had already taken “actions to correct clear deficiencies and [will be] taking additional steps to remedy remaining concerns.”

When the National Park Service announced the hiring of Smith as the chief of the Park Police, NPS officials declared that management reforms were on the way (E&E News PM, Feb. 25, 2021).

“Over the coming months, leadership of the National Park Service will explore opportunities with Chief Smith designed to strengthen our organization’s commitment to transparency,” NPS Deputy Director Shawn Benge said at the time.