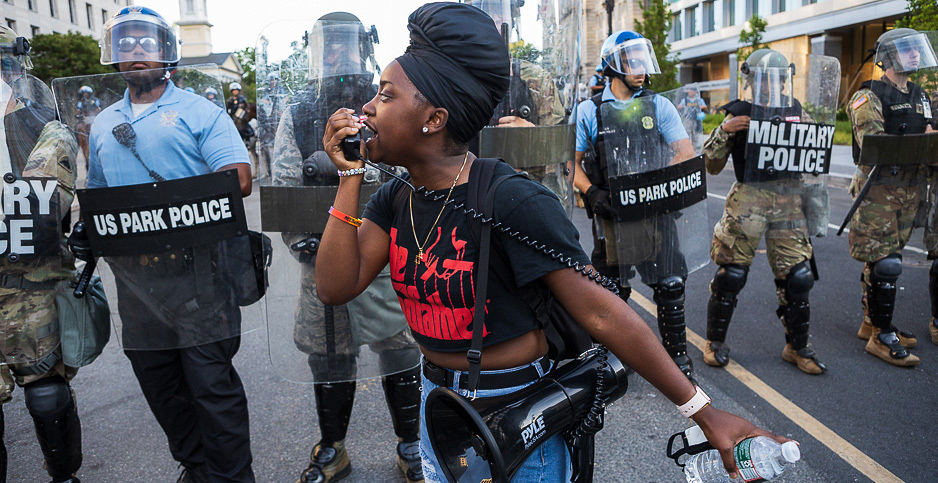 U.S. Park Police officers used tear gas and flash-bang explosives last night to disperse a peaceful crowd of protesters, clearing a path for President Trump to make an appearance at a historic church near the White House.

The move drew quick criticism from District of Columbia Mayor Muriel Bowser and former Interior Secretary Sally Jewell, among others.

"It is sad day for our nation when the dedicated people of the U.S. Park Police, who have helped support First Amendment activities in our nation’s capital for decades, are asked to aggressively clear peaceful protesters," said Jewell, who headed the Interior Department under President Obama. "We are better than this."

Bowser, who had ordered a 7 p.m. curfew, called it "shameful" that federal police used munitions to force the crowd to move 25 minutes before the order took effect.

Police chased the demonstrators shortly before Trump walked through Lafayette Square to the front of St. John’s Episcopal Church, where he held up a Bible as he posed for photographers. The church basement had been lit on fire the night before.

Phil Francis, chairman of the Coalition to Protect America’s National Parks, said he was "extremely disappointed in, and concerned about, the NPS employees who followed these wrongful orders" to allow the president to "secure a photo opportunity." He said that included leaders of the Interior Department and the National Park Service.

"NPS employees should never be ordered to carry out violent actions against peaceful protestors who are exercising their First Amendment rights protected under the United States Constitution," Francis said. "The use of tear gas, rubber bullets and brute military force on a group of people trying to peacefully enact change is unacceptable."

Yesterday marked the seventh consecutive day of protests against police brutality. They began in Minneapolis when 46-year-old George Floyd died in police custody after being arrested over accusations of using a counterfeit $20 bill to buy cigarettes. Derek Chauvin, a Minneapolis police officer who kept his knee on Floyd’s neck for nearly nine minutes, was charged Friday with third-degree murder and second-degree manslaughter.

After threatening yesterday to use the U.S. military to stop demonstrations that have expanded in cities across the country, Trump expressed his satisfaction in a tweet this morning.

"D.C. had no problems last night," he tweeted. "Many arrests. Great job done by all. Overwhelming force. Domination. Likewise, Minneapolis was great (thank you President Trump!)"

Park Police officers have been involved in controlling demonstrators near the White House since Friday, working with the Secret Service, the National Guard and D.C. police. A spokesman for the National Park Service said that "numerous members of the Park Police were injured in the line of duty."

Interior Secretary David Bernhardt praised the Park Police for their "continued bravery and serving with distinction."

"Several officers have sustained injuries in Washington, D.C., from the protests," Bernhardt said on Twitter. "We will not stand for anarchy, and the rule of law will prevail."

Earlier yesterday, Bowser said it made sense to use federal police to protect monuments in the city.

Vandals defaced monuments on the National Mall with spray paint over the weekend, spray painting the words "Yall not tired yet?" on the Lincoln Memorial and "Do black vets count?" on the World War II Memorial (Greenwire, June 1).

Cleanup was underway, and an NPS spokesman said a preservation crew had begun removing graffiti from both the Lincoln and World War II memorials.

"It’s looking pretty good. We fully expect when treatments are finished, nothing will be visible," said Mike Litterst, chief of communications for National Mall and Memorial Parks.

On Twitter this morning, Bernhardt posted a photograph of himself with two Park Police officers. He thanked the police for their "unwavering commitment to serve and protect this great nation and our national memorials, sites of remembrance to our nation’s heroes."