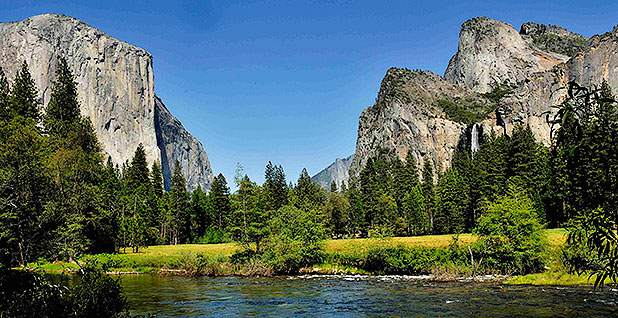 The National Park Service has ended a long-running legal dispute with one of its biggest concessionaires over intellectual property at Yosemite National Park, pictured here. GuyFrancis/Wikipedia

The National Park Service and one of its biggest concessionaires on Friday formally ended a 4-year-old fight over intellectual property that drew in high-powered legal talent, stirred a change in California law and inspired park service policy reviews and reforms.

The one-paragraph stipulation of dismissal filed in the U.S. Court of Federal Claims marked a quiet conclusion to a sometimes noisy lawsuit over trademarked names filed in September 2015 by DNC Parks & Resorts at Yosemite Inc., a subsidiary of the Buffalo-based Delaware North.

The case centered on a park concessionaire — Delaware North — that trademarked Yosemite site-related names when it was the park’s primary food provider. Yosemite Hospitality LLC, a subsidiary of Philadelphia-based Aramark Corp., took over the concessions contract in March 2016. As part of the handover, Delaware North sought payment for intellectual property that included the trademarked names.

Even in its brevity, though, the last in a line of 134 court filings submitted since the start of litigation hinted at the case’s heft.

The stipulation of dismissal noted that all sides in the dispute agreed to bear their own legal costs, a significant point in a case involving so many elite billable hours. The underlying settlement was announced in July (E&E News PM, July 15).

"Known briefly as The Majestic Yosemite Hotel during a trademark dispute, The Ahwahnee has the distinction of being Yosemite’s only AAA four-diamond hotel," the Yosemite Mariposa County Tourism Bureau’s website now proclaims.

Yosemite spokesman Scott Gediman said in July that the settlement requires Aramark to pay $8.16 million and the government to pay $3.84 million to Delaware North for the names, logos and other branded content. An evaluation once commissioned by Delaware North, and contested by the park service, had pegged the value of the trademarked names at $44 million.

The Yosemite dispute helped prompt a 2015 study by the Eppley Institute for Parks and Public Lands at Indiana University into key intellectual property questions.

"The establishment of an Intellectual Property Officer who directs IP issues and resolves open questions would greatly benefit the organization," the analysts noted.

Amid the Yosemite trademarked names conflict, the National Park Service subsequently asked concession companies for a list of trademarks and their estimated values. Companies delivered the names but were skeptical about assessing their values, which can be difficult to estimate.

According to the National Park Service’s website, a director’s order on copyright and trademarks is still being developed.

In 2016, the California Legislature changed state law to prohibit concessionaires from claiming ownership of a name associated with a California state park and to disqualify a bidder from future contracts if it attempts such trademark claims.

"This bill makes clear that … our state Department of Parks and Recreation cannot sign off on the type of trademarking conduct that produced the Yosemite dispute," Democratic Assemblyman Ken Cooley said at the time.