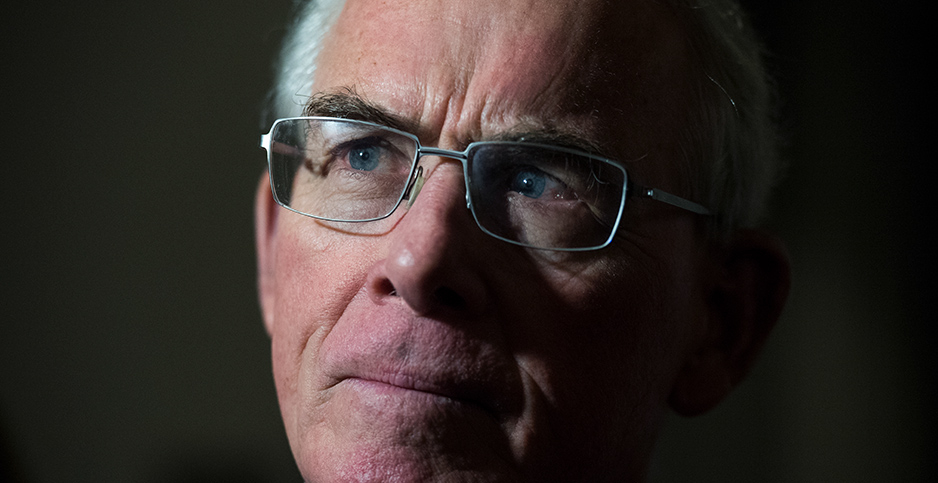 Rep. Francis Rooney wants to spend some time in Spain.

The Florida Republican is retiring after just four years on Capitol Hill, where he has become known as one of the few Republicans who support carbon pricing and environmental regulation.

When he leaves, Rooney wants to be a model for term limits and, once the coronavirus pandemic subsides, he wants to head to the Rioja region of Spain, where his family runs a small-batch winery, Bodega 202.

"I was a fundraiser for a long time for both of the Bush campaigns and was very closely involved with Mitt Romney’s campaign and Jeb’s campaign, as long as it was," Rooney said, referring to Republican former Florida Gov. Jeb Bush. "So I’ll probably say peripherally involved, but I want to pay attention to our family businesses."

Rooney, whose construction and holding companies made him one of the richest members of Congress, was ambassador to the Holy See during the George W. Bush administration.

Since replacing former Rep. Curt Clawson (R) in 2016, Rooney has largely been a reliable backer of President Trump, despite saying last year that he would be open to voting for impeachment (he ended up voting no) and earning a 24% lifetime score from the League of Conservation Voters, which is high for a Republican.

He’s been one of only a handful of Republicans to co-sponsor carbon pricing legislation, and since the beginning of the 116th Congress, he’s been the co-chairman of the bipartisan Climate Solutions Caucus with Rep. Ted Deutch (D-Fla.).

Rooney, whose district includes Cape Coral and parts of the Florida Gulf Coast, has also led the charge to boost funding for the Everglades and to extend the moratorium on offshore oil and gas drilling in the eastern Gulf of Mexico.

The House passed his bill, H.R. 205, to permanently ban drilling in the region last year. And President Trump followed last month by extending the current moratorium for 10 years, a milestone for which Rooney takes at least partial credit.

What are your plans for after politics?

I was a fundraiser for a long time for both of the Bush campaigns and was very closely involved with Mitt Romney’s campaign and Jeb’s campaign, as long as it was. So I’ll probably say peripherally involved, but I want to pay attention to our family businesses.

Our three kids are all taking care of different aspects of our family businesses, and with my wife, I just kind of help direct them and see where they can go with it. One of the things we have is a winery in Spain, which one of our sons looks after, but I intend to get a little more involved in that.

You said when you announced your retirement last year that you want to be a model for term limits. Can you tell me more about your perspective on that?

I think we could probably save this country if we manage to get the minimum wage up there and deal with inequality, if we got rid of these highly partisan congressional districts by better redistricting, and if we had term limits.

The founders didn’t put anything in the Constitution about term limits because they couldn’t imagine anybody becoming a professional politician. In fact, that’s part of what the Revolution was against.

Now, we have these people that have been up there 20, 30 years, and I think that’s kind of ridiculous, that out of a country of 340-something million Americans, we can’t have some turnover.

Do you think that plays a role in the partisan nature of issues like climate change?

I don’t know if the incumbency does. Certainly, the alignment of special interests with certain sides, whether it’s a teachers union or the oil industry or whatever. The energy industry used to be kind of 50-50, and now it’s all Republicans, and that’s not a good thing.

I think that my little personal crusade has been to push the Republicans to realize that we have been in the environmental business before. In some ways, we started it with [Theodore] Roosevelt and Nixon with the EPA.

What do you think are your biggest accomplishments from your time in Congress?

The two things I’m most proud of are getting the $2 billion for the Everglades [authorized in water projects legislation], because we’d never gotten more than $30 million a year until I got here.

Second is the getting the offshore drilling ban in the eastern Gulf passed [in the House], which [former House Speaker] Paul Ryan [R-Wis.] tried to do, but there was too much Republican alignment with special interests for him to get that done.

[House Speaker Nancy Pelosi (D-Calif.)] did act to protect Florida. It’s a really great thing that she did. Now, after two years of kind of pushing President Trump, he realized how important it is to Florida, and now he’s extended the moratorium for 10 years.

What sparked your interest in climate change and environmental issues?

I did a lot of research about sea-level rise, acidity, changing temperatures. I do a lot of scuba diving and fishing, and I’ve seen a lot of coral bleaching, which is horrendous.

[John] Pennekamp [Coral Reef] State Park in the Keys is almost all bleached out now. I’ve even seen bleaching down in the Exumas [in the Bahamas], which is one of the most pristine diving and fishing areas in the world. That’s all sea temperature-related.

I was sensitive to these things, and you read the statistics, and the data is pretty inescapable that CO2 has had an impact in terms of snowmelt, and therefore sea-level rise, in terms of acidity in the water, which leads to bleaching.

The other thing in addition to CO2 that way is this rise in the deep-ocean heat content, which I think is really going to plague coastal communities as the hurricanes get bigger. And we’ve seen it.

Where do you think your party is headed when it comes to climate change? Are there signs in your mind that it’s starting to take it a little more seriously?

There are a few people that are talking of interest about it — people like [Rep. Bruce Westerman (R-Ark.)], who wants to start a deal to plant trees, which are carbon sinks. I don’t think that’s the whole answer, but it’s something.

But by and large, most of our Republicans are not willing to jump for anything serious, like a carbon tax or supporting some of the environmental rules that Obama put in that Trump’s removed, which I think is highly unfortunate. And I’ve written about each one of them — methane, mercury, Pebble mine, well control, you name it.

Have you ever considered leaving the party over this?

No, I haven’t, because remember, my perspective on the Republican Party is more of a Bush-Reagan perspective.

Do you plan to support the president in the election?

There’s a lot of things I think the Republican Party’s off-base on. And I’d like to try to see it get on base, especially to get more young people, like some of the gun issues, environmental issues.

But it’d be very hard to vote for a Democrat when you hear the socialist economic, anti-wealth, anti-capitalism stuff. That’s very serious to me. At the end of the day, I think our free-enterprise economy is the backbone of our country.

Is there anyone you see taking up the carbon tax mantle among Republicans once you leave Congress?

Well, that’s a tough one, because none of them have signed on here. There’s a few of them that talk fairly positively about it, but they’re just not willing to stick their neck out.

They don’t want to get killed back home. Again, it all goes back to wanting to keep their job. These jobs should not want to be kept.

Have you had any discussions with Congressman Deutch about what’s going to happen to the Climate Solutions Caucus?

No, I haven’t. We just really haven’t seemed to get much enthusiasm. We tried a couple of meetings, and Ted and I were about the only ones who showed up.

I just don’t think any Republicans want to be seen out front on any of that stuff, and I think Trump’s made it harder.

Byron Donalds, the Republican candidate in your district, said at a recent debate that climate science is "not settled." Why do you think Republicans continue to go down that road?

I don’t know. The ideological sclerosis that exists on both sides on certain issues prevents any kind of rational discussion. At the very least, you want to say — as the [Intergovernmental Panel on Climate Change] says and the executive branch study two years ago says — that man has had a role.

After you co-sponsored a carbon tax bill, the American Energy Alliance said it sent you a yellow vest in reference to the gas tax protesters in France. I was wondering if you ever received that.

No, I don’t remember that. I remember Grover Norquist coming over to the office and trying to tell me what a bad idea it was. Of course, I told him, you’ve got a whole lot of bad ideas, so forget it.

How did that go? Was he mad?