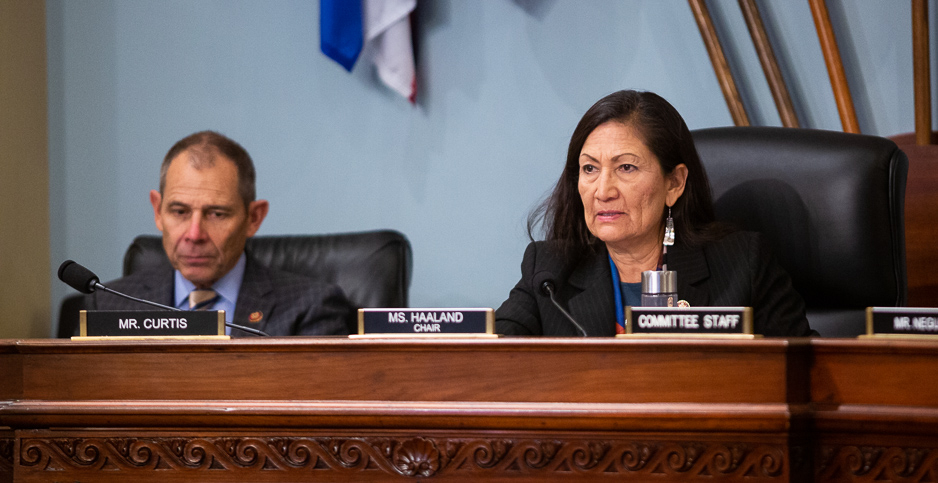 Republican lawmakers on the House Natural Resources Committee yesterday refuted suggestions that support for the sale or transfer of federal lands emboldens militant anti-government activists, asserting such characterizations are unfair to rural communities.

The arguments flared during a Subcommittee on National Parks, Forests and Public Lands hearing on the safety of federal employees at the Interior and Agriculture departments.

The hourlong session focused in part on a new Government Accountability Office study that found at least 360 incidents of threats or assaults against federal land managers in the four-year period ending in 2017 (Greenwire, Oct. 21).

"No one should face fear and harassment in their place of work or in their communities," said New Mexico Rep. Deb Haaland (D), the subcommittee’s chairwoman who characterized the report’s findings as "shocking."

GAO, which surveyed employees at the Bureau of Land Management, Fish and Wildlife Service, National Park Service and Forest Service, found that incidents often go unreported because many "consider receiving threats a normal part of their job."

In her opening remarks, Haaland criticized a handful of state and federal GOP lawmakers, accusing them of promoting "extremist ideologies" about the federal estate.

"Attempts to push this ideology into the political mainstream has a very real impact on people’s lives," Haaland said, seizing in part on a campaign ad Texas Sen. Ted Cruz (R) sponsored during the 2016 GOP presidential primary.

In that spot, Cruz said that "the people of Nevada, not Washington bureaucrats, should be in charge of your own lands" and vowed to "return full control of Nevada’s lands to its right owners" if elected (Greenwire, Feb. 19, 2016).

"Absolutely no one in this room on either side of the aisle condones violence or threats against federal employees. It’s unfortunate that I feel I even need to make that statement," Curtis said.

He went on to defend individuals who favor the sale or transfer of the federal estate, saying that such views are "not dangerous or threatening" despite a handful of high-profile incidents in recent years.

"Calling for local ownership and control of public lands does not embody an attack on the federal government," Curtis said, and later added: "Landowners and users who disagree with specific land management decisions should not be made to feel that somehow they will be placed on a government watchlist of potential threats."

During the hearing, lawmakers and witnesses touched on incidents including those involving Nevada rancher Cliven Bundy and his sons.

The Bundy family, who have long refused to pay grazing fees for their use of federal lands near Bunkerville, Nev., rose to national prominence in 2014 when they staged an armed standoff with federal agents who attempted to seize their cattle.

Brothers Ammon and Ryan Bundy would later lead efforts to occupy the Malheur National Wildlife Refuge in Oregon. It was part of a protest over jail terms handed down to Oregon ranchers Dwight and Steven Hammond, who were convicted of arson on federal lands (Greenwire, July 17).

"The vast majority of citizens are not like those in the rare, high-profile, headline-grabbing incidences that will be showcased today," Curtis said. "My constituents do not wish to have conflict and naturally seek compromise and cooperation from their government."

"Rural Americans, especially in the largest federally owned and managed 11 Western states, are not being listened to, much less heard," said Nichols, a rancher, who noted Harney County is 75% federally owned land.

"Much of what is often described as anti-government is really coming from a place of feeling excluded or being on the losing end of unbalanced natural resource management," he added.

But committee Chairman Raúl Grijalva (D-Ariz.) said the panel has an "obligation" to respond to the GAO report.

In an interview with E&E News, Steve Ellis, who served as BLM deputy director of operations before he retired in 2016, asserted that while disagreements will never disappear from resource management, he hopes that civility could make a resurgence.

"Living in small towns … you’re not a faceless bureaucrat," Ellis said. "It’s important to engage in the community."

Ellis, who began work as a BLM forester in Burley, Idaho, in 1979 and went on to serve in senior positions in both BLM and the Forest Service, acknowledged he received threats over the years. In one instance, two men in Enterprise, Ore., threatened to lynch him over their unhappiness with off-road vehicle restrictions.

"It was a contentious issue," Ellis recalled. "Their reaction was in no way reflective of the people in Wallowa County. … These were a couple of loose cannons so to speak."

While Ellis said it is up to individual land managers and agency employees to determine whether to report such events, he offered advice to current land managers: "It’s important to stay calm in these situations. It really helps.

"Many times it lets people get it off their chests and then they’re more in a listening and discussion mode," he added, referring to public meetings that can be a prime time for emotional outbursts. "You have to be able to read these things. After a time, you can determine what’s a legitimate threat and what is someone blowing off steam."