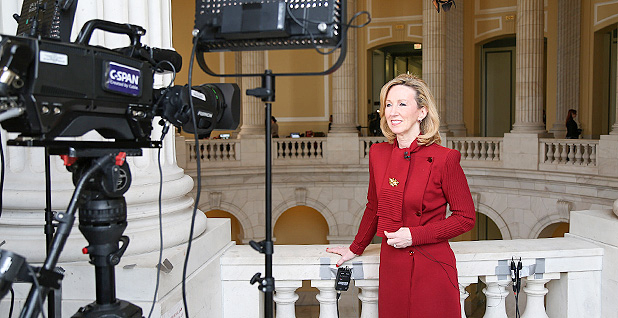 Republican Barbara Comstock of Virginia and Democrat Stacey Plaskett of the Virgin Islands are the most recent pair to join the "Noah’s Ark" group, bringing the current ranks of the Climate Solutions Caucus to 44 members. And sources say six more lawmakers will join very soon.

"We ultimately need everybody and can’t address this problem with just half of the country," said Emily Wirzba, who lobbies on sustainable energy and the environment for the Friends Committee on National Legislation.

"That just makes all of us roll our eyes and say, ‘Really, this is pure politics,’" Miller said.

Issa said in a statement to E&E News at the time that coastal regions, like Southern California, are counting on Congress for action, and they "shouldn’t be forced to choose between unworkable new taxes or complete inaction."

One group cheering Republicans for acknowledging the problem is Citizens’ Climate Lobby, which advocates a revenue-neutral carbon fee and dividend model. The group brought 1,300 volunteers to the Hill this month to lobby (Greenwire, June 13).

"We definitely don’t see just joining the caucus as the be-all, end-all of the issue," said spokesman Steve Valk.

Valk described a GOP "ladder of leadership" on the issue with Florida Republican Rep. Carlos Curbelo, the caucus’ co-founder, at the top.

Curbelo led four Republican colleagues on a letter to the Trump administration, advising against withdrawing from the Paris Agreement. In the wake of President Trump’s announcement that he planned to exit, Curbelo has stepped up his legislative action, backing bills to tackle short-lived contributors to climate change and methane emissions (E&E Daily, June 9).

The Friends Committee on National Legislation’s Wirzba suggested the strategy is long term. She predicted the climate-savvy GOP members would go beyond dialogue and "strategically introduce legislation to reduce greenhouse gas emissions over the coming months."

"We desperately need this bipartisan spirit in Congress," Wirzba said when asked if she’s optimistic. "As these relationships are built across the aisle, trust will grow, and the chances of robust climate legislation succeeding in Congress will increase."

"It’s more on us than it is on them to move them up that ladder," Valk said.