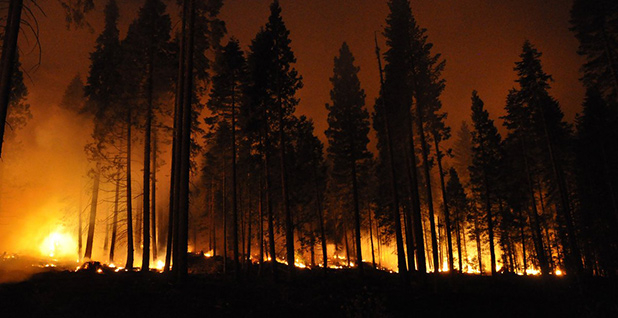 At a House Energy and Commerce subcommittee hearing yesterday, there was agreement on the need for stronger steps to confront the Western wildfires that can foul the air for weeks at a time. But heated jabs came over the role of climate as a contributing factor.

"If this Congress wants to truly address the increase in extreme wildfires, we must act to slow the global warming that is driving changes in climate and weather patterns," full committee ranking member Frank Pallone (D-N.J.) said in his opening statement.

Pallone went on to excoriate President Trump for a host of regulatory rollbacks and then broadened his attack to the congressional GOP.

"When are Republicans going to stop actively pursuing policies that make the problem worse?" he asked.

Pallone left the room soon after. But for Rep. David McKinley (R-W.Va.), the screed afforded "a little snapshot of what life could be like" if Democrats take the House in the November elections and Pallone becomes the panel’s chairman.

"The diatribe of challenging President Trump for everything on climate change just shows such a distraction that’s going to take place in this committee in the years ahead," McKinley said. "It’s just inexcusable."

If the hearing by the E&C Subcommittee on Environment was intended to focus on strategies for lessening and mitigating the vast amounts of air pollution resulting from ever-larger blazes, it also served to expose the enduring partisan split over the causes.

Although there was some consensus that judicious use of prescribed burning can help limit the intensity of such blazes, Democrats repeatedly mentioned climate change, which scientists say promotes drier conditions and higher temperatures. Republicans were more inclined to focus on federal forest management policies that they blamed for a buildup of tinder by limiting logging.

"We need to back up as a nation and start talking about how we manage our forests," Rep. Jeff Duncan (R-S.C.) said, adding, "That means more timber activity." In West Virginia, the Monongahela National Forest "is becoming a nursing home for wood," McKinley said.

For the most part, the panel of five witnesses was less concerned with debating the reasons for larger and more frequent blazes than in describing their increasingly dire effects and what can be done about them.

Now, the state is seeing "heavy regional air quality impacts every year" from sometimes catastrophic wildfires in Idaho, other Western states and Canada, Anderson said. As a result, she added, Idaho residents are exposed to very unhealthy or hazardous air quality every year.

In neighboring Montana, the 1.2 million acres burned last year was roughly the size of Delaware, State Forester Sonya Germann said. In the past 11 years, the air quality standards for particulate matter have been exceeded almost 580 times, she said, with more than one-third of those violations occurring in 2017.

Because of climate change, excessive "fuel loading" and other factors, Germann said, more than 85 percent of Montana’s forests are at "elevated wildfire hazard potential."

Like other witnesses, Germann urged more reliance on prescribed burning, which is already widely used in the Southeast where most forest land is privately owned. Although such controlled blazes won’t prevent wildfires, she said, they can lessen the amount of smoke the fires produce.

Yesterday’s hearing was the second by the Environment Subcommittee related to the health effects of wildfires following a first-ever foray into the subject last fall (E&E Daily, Oct. 5, 2017).

Asked afterward whether there were plans for any legislation, E&C Chairman Greg Walden (R-Ore.) noted that the committee’s jurisdiction doesn’t encompass federal forest policy but said lawmakers would now be better informed when such measures come up in the House.

What’s important, Walden said, "is members of both parties who aren’t from the West are learning what we’re facing in the West. We’re trying to elevate the problems — the deadly problems — that people in these communities are suffering from."