Parts of flooded Yellowstone likely to remain closed all summer 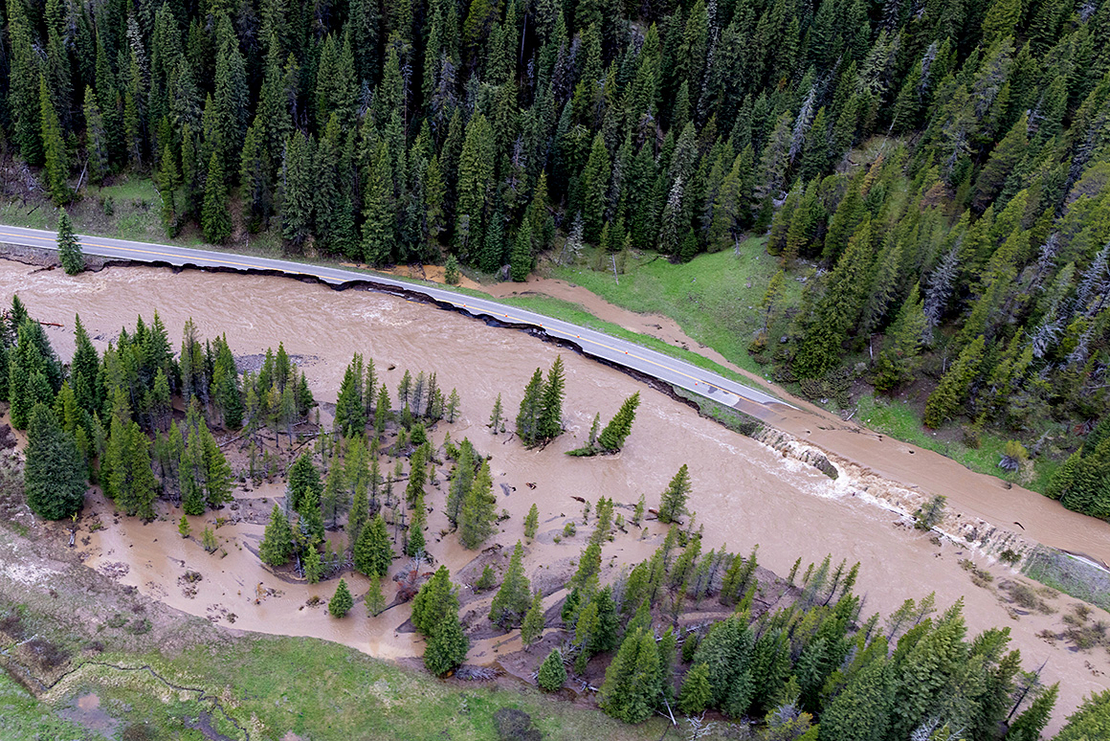 Yellowstone National Park officials say portions of the park may be closed for an “extended” period following catastrophic flooding that caused a park shutdown, the ejection of more than 10,000 visitors and widespread infrastructure damage whose repair will require both serious dollars and tough decisions.

Park roads were knocked sideways. At least six park employees lost their residence, which widely circulated video showed collapsing into the raging Yellowstone River. Gateway communities like Gardiner were temporarily cut off. Power outages hobbled wastewater treatment facilities and sewer lines have been compromised, potentially including one beneath the Yellowstone River.

And park officials know they may not even know the worst part yet (Greenwire, June 14).

“The water is still raging,” Yellowstone Superintendent Cam Sholly told reporters late yesterday afternoon. “We haven’t done damage assessments. Without those damage assessments, it’s really hard to come up with an exact timeline or even a good general timeline.”

Floodwaters wash away houses in Yellowstone 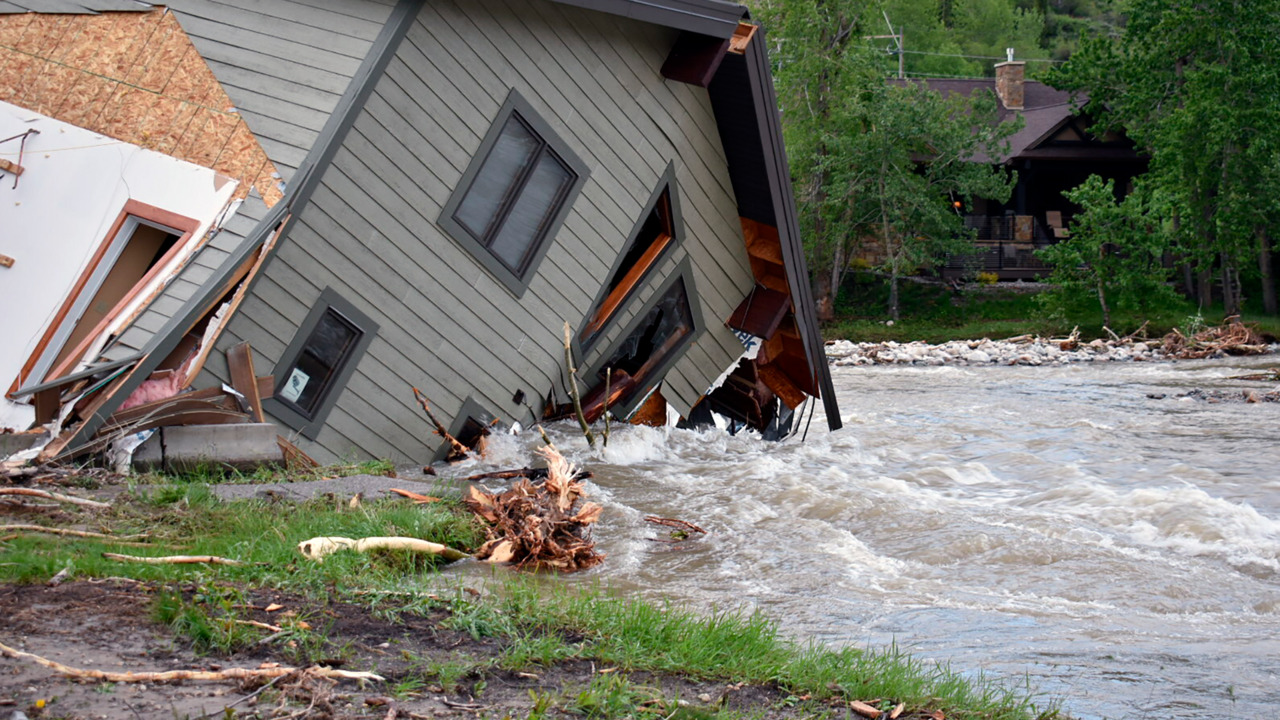 For Parker Manning of Terre Haute, Ind., the flooding cut short a family visit to Yellowstone that began on Saturday.

Manning, his wife and three of their four daughters, along with his sister and her youngest son, had rented a cabin in Gardiner, Mont., near the park’s north entrance.

He said it started raining on Sunday, and by Monday water from the banks of the Yellowstone River, some 75 feet way, was rising near the cabin.

It was Manning who took a spectacular video from the deck of his cabin that showed a house that was used for NPS employees washing away into the river on Monday evening.

As word had already circulated that roads were flooded “and we weren’t getting out,” the family drove to a grocery store for food and water, and prepared to stay for several days, Manning said.

But yesterday, Manning listened to a conference call with emergency officials who reported they had been able to clear parts of Highway 89. “The indication was if you didn’t leave now, they didn’t know when you would be able to. So we piled all our stuff in the car and were gone in about 15 minutes,” he said.

On the drive out on Highway 89, “we saw logs, timber, debris stacked everywhere where the water receded,” he said.

“Just a sad situation for everybody involved,” he said.

No injuries have been directly attributed to the flooding that Sholly said he’d heard “was a 1,000-year event, whatever that means,” but one park visitor died from cardiac arrest in a campground on Monday.

Quirky weather kicked off the flooding, which Sholly explained occurred when 2 to 3 inches of rain fell amid rising temperatures over the weekend on about 5 inches of accumulated snow, causing the snowpack to melt.

Sholly said the park’s southern section, which includes such iconic features as Old Faithful and Grant Village, might reopen within a week.

“But even if we got started right now, I’m not sure we could get the road on the northern end reopened,” Sholly said. “So that will likely stay closed for the rest of the season.”

Park County Commissioner Bill Berg acknowledged to reporters that “it’s going to be pretty tough for Gardiner businesses to recover from, and that’s not even to mention the impact to infrastructure.”

Noting that “half the park cannot support all of the visitation,” Sholly said that park officials are “exploring a range of options” for the eventual partial reopening that could include timed entry or potential reservation-type systems to use when the southern section reopens.

Even with this, all of the decisions concerning the 2.2 million-acre park are subject to the whims of the weather.

“If we get warming temperatures and the right mixture of precipitation like we did Sunday, we could have another flood event coming through Yellowstone in the upcoming four or five days,” Sholly said.

Park officials could only make a rough estimate of the number of visitors they evacuated, with Sholly noting that Yellowstone typically receives between 15,000 and 20,000 daily visitors in June, leading to an assessment that “well over” 10,000 were forced to leave.

Sholly added that park officials believe there are “12 people still left in the back country that we know are safe and that are making their way out.”

The 150-year-old park previously locked its gates for two months at the start of the Covid-19 pandemic and was closed during several federal government shutdowns, but Sholly said he was not aware of any prior closure prompted by flooding.

When the park reopens the southern section, officials anticipate using Yellowstone’s west, south and east entrances. The north entrance and northeast entrance will remain closed until officials figure out what will happen in the northern section.

As they plan for rebuilding, Yellowstone officials say they will keep in mind the possibility that climate change may prompt similar disruptions in the future and that this may lead them to realign certain roads and make other accommodations.

“I don’t think it’s going to be smart to invest potentially, you know, [millions] of dollars into repairing a road that may be subject to a similar flooding event in the future,” Sholly said.

Sholly has talked with Interior Secretary Deb Haaland and National Park Service Director Chuck Sams, and the Yellowstone area’s various lawmakers have pledged support. Officials have not indicated whether existing emergency aid programs will need to be supplemented.

Officials stress that they still don’t have a complete picture of the ecological fallout.

Sholly, for instance, said that “we’re not 100 percent sure” about the condition of a sewer line beneath the Yellowstone River that serves the town of Gardiner, but he added that “we are taking measures to mitigate” any harm that may result from that line’s discharges.

“This is not going to be an easy rebuild,” Sholly said.

In nearby Red Lodge, Mont., Frank Pirtz, co-owner of the Red Lodge Ace Hardware store, noted that the flooding forced Rock Creek to jump its banks and flood several blocks of Main Street.

Many homes were flooded, Pirtz said, and his store has long since run out of sump pumps, generators and even gasoline cans.

He said it floods every five or six years, “but this is the worst ever.” In addition to roads and homes, he said four bridges into town have washed out.

“People have not even started cleaning up yet because they’re waiting for the water to recede,” he said.

It will take months to clean and repair all the water damage.

“It’s going to be terrible,” he said.