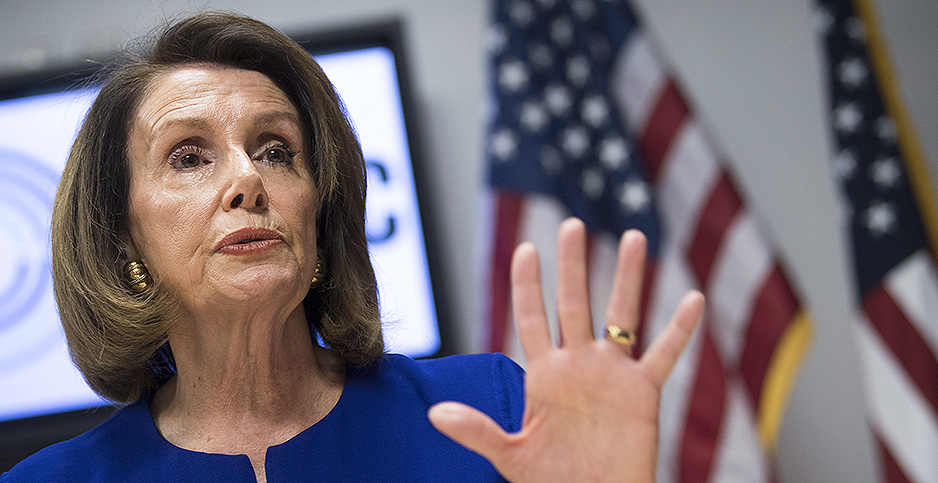 House Democratic Leader Nancy Pelosi of California during a press conference this morning on the elections. Kevin Dietsch/UPI/Newscom

Indeed, the advance ballot numbers look good for Democrats, with some election watchers predicting midterm records when it’s all over.

"This morning has been encouraging," he added. "We’re seeing long lines all across America, people waiting to vote. The rain is not scaring anyone away."

Without the influence of big donors, she said, "we can pass environmental protections because we’re not dominated by any industry in that regard."

"I am very hopeful that we’ll be able to take the Senate, and clearly, we are on track to take the House," she said on CNN yesterday. "But we have to go down to the wire. I take nothing for granted anywhere."

"This is an ‘I Feel Good’ moment," Inslee said.

"Donald Trump didn’t just win because of those that voted for him — he won because millions didn’t cast a vote at all," Kerry wrote. "Vote, and you may have disappointment — but you’ll never have regrets."

The president’s allies are piling on. Former Utah Republican Rep. Jason Chaffetz said on Fox News this morning that Pelosi "will be the speaker of the House if the Democrats take control," despite Democrats "distancing" themselves from the California Democrat.

"I have the seniority. I have the relationships," she said. "I’ve spent a lot of time on Dodd-Frank reforms."

Congressional Republican leaders, meanwhile, have had a decidedly different message down the home stretch, though they’ve often avoided stepping on Trump’s toes.

"I think our voters are looking for opportunity — hope, growth and opportunity. That’s what we’ve given them through our tax cuts and regulatory reform, and they want to keep America safe," Stivers said on Fox News this morning. "It’s really those two things that our voters want and that all Americans want."

Stivers has also spoken out against Iowa Republican Rep. Steve King, who is facing a surprisingly tight race. King’s history of racist remarks has garnered a national spotlight in recent weeks, in part because of an interview he did over the summer with a far-right Austrian party, during which he lamented the effects of racial diversity and the decline of "Western civilization."

King has gotten a boost, however, from Iowa Republican Sen. Chuck Grassley, who filmed a short endorsement, citing King’s support for ethanol and wind.

"There are 435 House elections," Stewart said. "They’re all individual, and they really pivot many times on local issues and the local candidates."