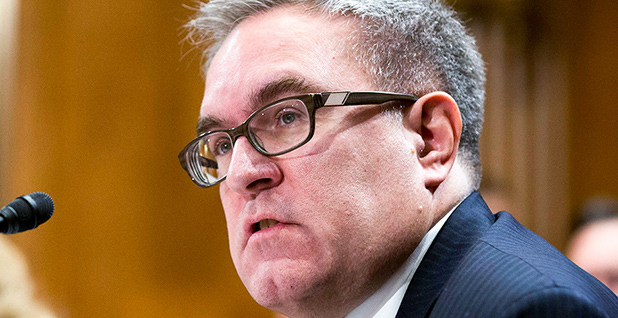 Former EPA officials shrugged off Administrator Andrew Wheeler’s suggestion last week that the United States might restrict the use of climate models. But some of his supporters suspect it could foreshadow large changes to public policy.

"I don’t think they have a grand plan to screw up the modeling," said Anna Phillips, a career official who served as program manager for EPA’s Office of International and Tribal Affairs before she retired in mid-2017. "I think they just have talking points."

At issue is a sentence Wheeler inserted into last week’s closing statement of the Group of Seven ministerial in Metz, France. It said the Trump administration wants to "re-examine comprehensive modeling that best reflects the actual state of climate science in order to inform its policy-making decisions" (Climatewire, May 10).

This new methodology, the statement says, would compare "actual monitored climate data against the modeled climate trajectories on an on-going basis."

It was the first reference to climate science that the Trump administration has included in a statement of that kind, and it revealed divisions between the United States and six of its closest allies. Other members of the G-7 — Canada, France, Germany, Italy, Japan and the United Kingdom — all support strong action to confront rising global temperatures.

The line was oddly specific, and it left observers wondering what it meant. Sir Robert Watson, a British scientist who was on hand in Metz to brief ministers on last week’s landmark United Nations report on human-induced mass extinction, said Wheeler seemed to have last November’s U.S. National Climate Assessment on his mind.

What did Wheeler mean?

Patrick Michaels, senior fellow with the CO2 Coalition, which disputes the consensus on man-made warming, saw parallels between the statement and the work of John Christy, a professor of atmospheric science at the University of Alabama, Huntsville, and a member of EPA’s Science Advisory Board.

He pointed to Christy’s research, which employs satellite data to support his claim that climate models overstate Earth’s sensitivity to warming.

Michaels said Wheeler’s embrace of a new methodology for projecting climate sensitivity could have far-reaching effects. Climate modeling provided one foundation for EPA’s 2009 finding that greenhouse gas emissions endanger human health, though there were others. The so-called endangerment finding provides the basis for all climate regulation.

"If the line was added by Wheeler, it’s not hard to ultimately point that to the endangerment finding," said Michaels. "I can’t quite see another purpose for this statement."

But former EPA officials, including professional staff members who served at the beginning of the Trump administration, say Wheeler likely doesn’t have an alternative modeling methodology at the ready. Instead, the G-7 statement — which would have been authorized by the White House — is meant to show daylight between the United States and its G-7 partners, which are still members of the Paris climate agreement.

"In this administration, the talking point is what’s important. The policy is usually not there," said Phillips, who left EPA after then-Administrator Scott Pruitt’s attendance at the G-7 environment ministers’ meeting in Bologna, Italy, in June 2017. Pruitt left that meeting early, but not before participating in a pasta-making demonstration with his Italian counterpart. The trip cost taxpayers a reported $120,000.

"This is essentially saying, ‘We are instituting a process for nurturing doubt,’" said Joseph Goffman, EPA’s top lawyer for the Office of Air and Radiation during the Obama administration. Goffman accused Wheeler of ignoring the fact that climate models are always under review by the scientists who develop and use them and who rely on them to deliver quality results.

Staff left in the dark

Former senior EPA officials who have stayed in touch with colleagues at the agency say they’re in the dark about what Wheeler meant in Metz. Career staffers reached by E&E News mentioned a proposal that the White House National Security Council is known to be considering scrutinizing climate science used in national security planning. Professional staff members at EPA, NASA and NOAA who are responsible for some of the modeling that Wheeler dismissed feel increasing pressure from political appointees, former agency officials said.

Daniel Costa, national program director for EPA’s Air, Climate and Energy Research Program before his departure last year, said he asked former colleagues what the G-7 climate line might refer to. "Nobody seems to have any idea," he said.

"They don’t often communicate down into the staff," he said of the political leadership.

"They share virtually nothing," said Chris Zarba, who stepped down in 2018 as director of EPA’s Science Advisory Board. "And normally when an administration comes in they’re looking to career staff to keep them out of trouble, and that’s one of the reasons that this administration has been getting in so much trouble — they’re not receptive to hearing from the career staff."

The officials said that the Trump administration — in particular Wheeler and Pruitt — is skeptical of modeling as a basis for environmental regulation. That’s shown up in policies like the agency’s effort last year to bar science that is "not transparent or reproducible."

Zarba said the "secret science" legislation was the administration’s preferred strategy to limit science at EPA’s disposal. It foundered in the Senate.

Past officials also note that administration actions haven’t always fared well in the courts, and some of them predicted a similar outcome if Wheeler tries to overhaul the agency’s use of climate modeling.

"If they wanted to be successful they would want their actions to have some life after this administration," said Zarba. "I think if there’s a change of administration in two years, most of what you’re seeing will go away in about a heartbeat."

Most federal climate modeling isn’t conducted at EPA. The overwhelming majority falls to NASA and NOAA, which are traditionally more insulated from politics. The National Climate Assessment, meanwhile, depends heavily on the work of independent scientists from academia that EPA has little control over. The best a Trump administration could do if it releases another edition of the assessment, said Costa, would be to try to bury it or create a distraction — as it did last year, when it put the report out on Black Friday.

"It’s just going to be difficult for them to destroy that pyramid of fundamental, solid research, and once the administration flips, it’s going to be kind of like a hangover from a bad dream," said Costa.