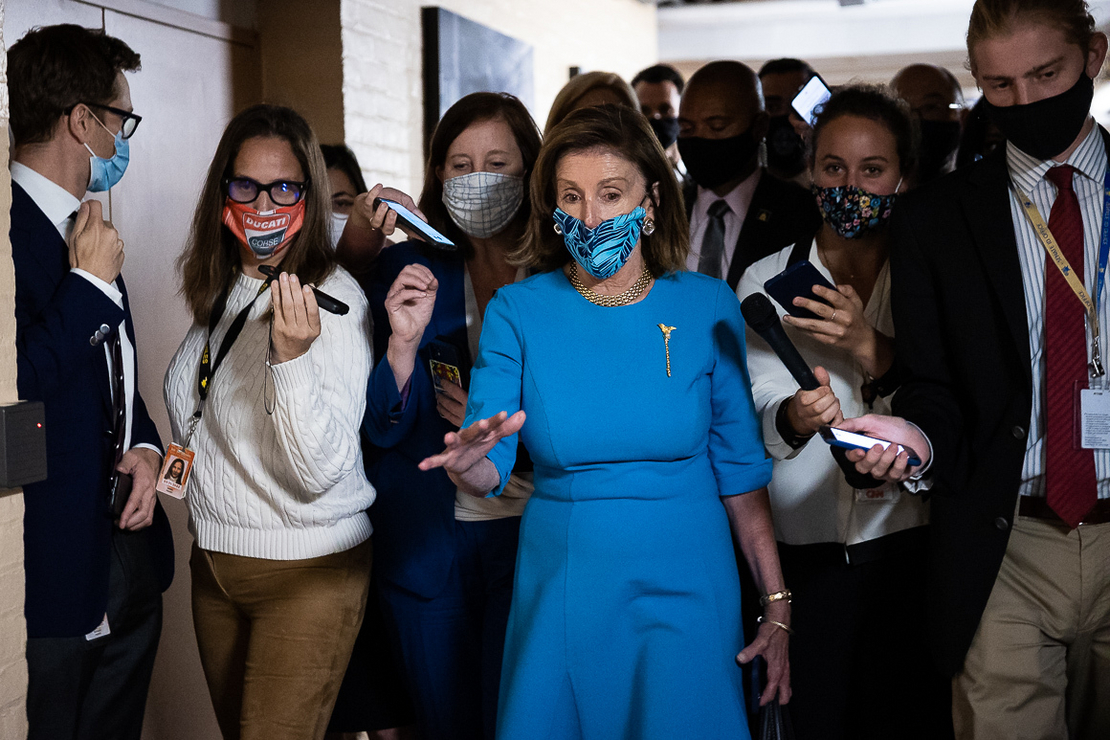 House Democratic leaders are struggling to get their massive reconciliation package ready for a vote on Monday. And it’s not clear a vote will even happen.

It’s a huge task with steep odds, but Democrats’ hopes of salvaging months of hard work and political maneuvering — and delivering on the most ambitious climate agenda in a generation — could depend on it.

After a day of meetings with President Biden and Democratic lawmakers from across the different ideological factions on Capitol Hill, members appeared no closer to an agreement last night on how to proceed with a two-pronged approach to make massive investments in infrastructure and social programs.

Indeed, there didn’t appear to be any breakthroughs on outstanding policy disagreements, climate-related or otherwise. Following his meeting with Biden yesterday, Sen. Joe Manchin (D-W.Va.) said he had no idea how long it would take to iron out his clashes with fellow Democrats on some of the major environmental policy provisions in draft legislation. He noted he had “a lot of problems” with climate change aspects of the package.

There also was no agreement on a lower top-line number that could satisfy moderates, with Manchin saying simply that Biden instructed lawmakers to “give me a number” without providing any deadline for doing so.

The current problem facing Democrats is this: House progressives say they won’t vote for the bipartisan $1 trillion infrastructure bill the Senate passed this summer until the Senate also votes on a partisan, $3.5 trillion reconciliation measure that more aggressively addresses not only climate change but the systems that govern child care, health care and housing.

“I reiterated [to Biden] what I have consistently said: Progressives will vote for both bills because we proudly support the President’s entire Build Back Better package, but that a majority of our 96-member caucus will only vote for the small infrastructure bill after the [reconciliation bill] passes,” Congressional Progressive Caucus Chair Pramila Jayapal (D-Wash.) said in a statement last night.

House moderates, meanwhile, say they’re holding House Speaker Nancy Pelosi (D-Calif.) to her promise that the chamber will vote on the bipartisan bill on Monday, regardless of whether there’s a reconciliation bill to vote on alongside it.

Rep. Stephanie Murphy (D-Fla.), a co-chair of the conservative Blue Dog Coalition and the only Democrat to oppose the reconciliation package advanced by the Ways and Means Committee last week, said after her meeting with Biden that she expected the Senate infrastructure bill to come up for a vote Monday as planned.

“I didn’t hear anything that indicated otherwise,” she told reporters on a conference call.

In a statement late yesterday, the White House stressed that this was just the beginning of Biden’s engagement with lawmakers and that follow-up meetings would begin as soon as today “to continue to advance the process of passing these critical bills.”

But there are just a few days left to solve the impasse before the House’s self-imposed Monday deadline. And in the meantime, Pelosi is said to be working feverishly to ready a reconciliation bill for a vote on that day that either combines all of the House-passed components or at least constitutes some rough sketch of the policy areas where House and Senate lawmakers agree.

“That’s what the speaker is staying up 24 hours a day to try and do,” said Rep. Peter DeFazio (D-Ore.), the chair of the House Transportation and Infrastructure Committee.

After she arrived back in the Capitol following her own private meeting at the White House with Biden and Senate Majority Leader Chuck Schumer (D-N.Y.) yesterday afternoon, Pelosi was asked whether she expected to have the reconciliation bill ready for a vote Monday alongside the bipartisan agreement.

"We are on schedule,” she replied. “And we’re calm and everybody’s good and our work’s almost done,” she added, without providing details of her progress. “We’re in good shape.”

‘Give me a number’

Ahead of the meetings yesterday, some lawmakers were hopeful the conversations would defuse tensions and provide a path forward.

House Budget Chair John Yarmuth (D-Ky.) said he was looking for Biden to “reestablish that both sides, moderates and progressives, are dealing in good faith. We’re both doing our best to get this stuff done.”

If that was, indeed, Biden’s objective, Yarmuth said, “then I think there’s a way to negotiate a way to handle next week.” The White House said there would be more meetings in the coming days.

Sen. Ben Cardin (D-Md.) said he hoped the White House meetings would produce “a formula to get the 50 [Senate] Democrats together with the House Democrats so that we can get a framework and a bill.”

Cardin added, “I think we need to get an agreement on how to move forward, which includes how we handle the bipartisan infrastructure package.”

However, although lawmakers returned from their meetings with positive feedback for how Biden moderated their discussions, they didn’t indicate the president had paved the way for a compromise that would satisfy progressives.

Murphy said she continued to raise concerns about the size and scope of the $3.5 trillion reconciliation package, and she dismissed questions about a timeline for finding an agreement. To become law, the bill needs to be more “precisely targeted,” she said.

“That’s just a fundamental fact; it’s rooted in political reality and must be accepted if we are going to have success in getting a bill to the president’s desk and signed into law,” Murphy said.

An area where Murphy could be sympathetic to progressives’ pleas is around investments to combat the climate crisis. She said yesterday she believed climate provisions should not have to be paid for, as the price of inaction outweighed the price of putting certain policies in place.

Murphy also told reporters that at the White House meeting, where chocolate chip cookies packaged with the presidential seal were shared, she expressed a “strong preference for making bold investments” in climate change.

But while many lawmakers said they used their audience with Biden to pitch policy proposals or complain about provisions under negotiation, these meetings didn’t bring Democrats closer to the kind of consensus necessary to close a deal as sweeping as the reconciliation bill.

Manchin, for instance, said he continued to “have a lot of problems” with the policies to combat climate change that more progressive Democrats are pushing. The chair of the Senate Energy and Natural Resources Committee is particularly incensed over the proposal for a clean energy payment program.

Manchin also reported that Biden told him and his colleagues yesterday to propose a new top-line number for the reconciliation package — a suggestion that could concern liberal lawmakers who already think $3.5 trillion is insufficient for meeting the scale and scope of their ambitions.

“Just work on it," Manchin recalled being instructed by Biden. “Give me a number and tell me what you can live with and what you can’t.”

‘A slow and torturous process’

Further confusing matters, Senate Finance Chair Ron Wyden (D-Ore.) told reporters last night that Biden informed a separate group of Senate progressives that he would talk to Schumer and Pelosi about reconsidering what many Democrats consider an “arbitrary deadline” of Monday to vote on the bipartisan package.

A delay, Wyden said, would accommodate more time to negotiate and for the Congressional Budget Office to deliver a “score” of the legislative proposals.

Manchin simultaneously cast significant doubt that a reconciliation agreement could be reached in time to pacify progressives and chided his liberal colleagues for not being willing to vote on the bipartisan bill on Monday as planned.

“It truly is a shame that they’re using that as a hostage towards this,” he told reporters. “I think a good reconciliation bill can be done whenever, it’s going to take a lot more time. … And to hold up a bill that every part of this country needs just doesn’t make any sense at all.”

While Biden made it clear to members he wanted a reconciliation package agreed to as soon as possible, he gave no hard deadlines, multiple lawmakers in both chambers said in interviews, statements and hallway conversations following their White House huddles.

Senate Budget Chair Bernie Sanders (I-Vt.) was adamant last night in his belief that if the House proceeds with its scheduled Monday vote on the scaled-back bipartisan plan, it would be defeated.

“And that would be a good thing,” he said, “because both pieces of legislation have got to go forward.”

“We voted for the bipartisan infrastructure bill with the clear commitment that the two pieces of the package would move together along a dual track,” they wrote. “Abandoning the $3.5 trillion Build Back Better Act and passing the infrastructure bill first would be in violation of that agreement.”

But Sanders, fresh from his own meeting at the White House with Biden, offered some glimpse of optimism along with the grim reality.

“This is a slow and torturous process when you have 50 people and no votes to spare,” he said of the Senate. “In the House they’ve got three votes and a lot of disagreements. But I think at the end of the day, we’re going to work it out.”