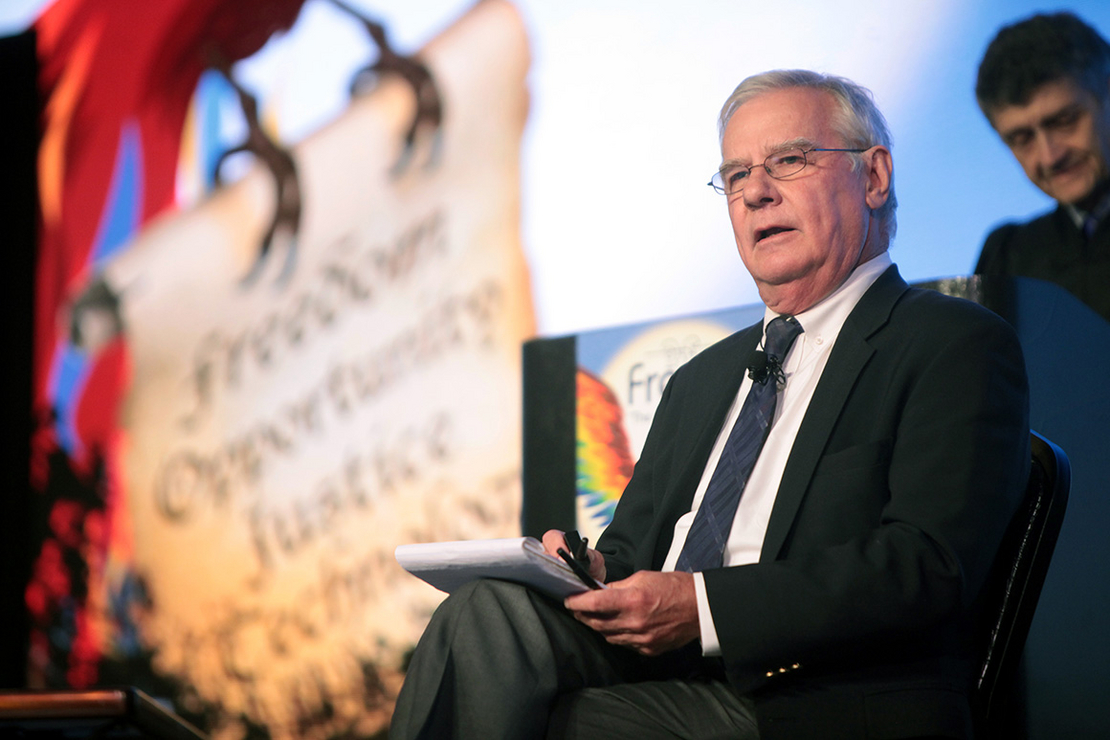 The late Patrick Michaels, a senior fellow at the Competitive Enterprise Institute, speaking at the 2016 FreedomFest at Planet Hollywood in Las Vegas. Gage Skidmore/Flickr

One of the most influential climate deniers in American history has died.

Patrick J. Michaels, who died Saturday at 72, created the modern concept of “lukewarmism,” which holds that humans are warming the planet but rejects the notion it will have severe consequences. That idea has become dominant in today’s Republican Party, which rejects significant restrictions on fossil fuels and has ignored the warnings of climate scientists who have said that unabated warming will be devastating for humanity.

Michaels was not a denier but a true skeptic who never stopped questioning scientific research, said Ryan Maue, who was tapped by former President Donald Trump to be NOAA’s chief scientist.

“He occupied the space which said climate change is a problem, but it’s not going to be as severe as some of the more alarmist scientists are saying,” Maue said yesterday.

Michaels, who had a Ph.D. in climatology from the University of Wisconsin, Madison, was among the handful of researchers with a legitimate climate science background who were unwilling to change their minds even as their numbers dwindled in the face of a growing body of research that clearly demonstrated humans are warming the planet at an unprecedented pace through the burning of fossil fuels. He often highlighted doubt in climate science and chose to ignore far greater areas of certainty and consensus, often being paid by the fossil fuel industry to promote such views.

A growing body of research shows the planet already is experiencing a series of catastrophic changes, driven by human-caused climate change. Scientists have found a human fingerprint in more extreme weather, including droughts, wildfires and flooding.

Michaels was a “good guy to have a beer with,” said James Hansen, a former NASA climate scientist who sounded the alarm about global warming in 1988. Hansen told E&E News yesterday that he found Michaels to be gregarious and affable, and for all their scientific divergence, they liked one another.

But when it came to the quality of Michaels’ scientific claims, Hansen was unequivocal.

“Pat was a cherry-picker, searching for bits of data in which the facts, for a limited period, seemed to contradict the community’s view on human-caused climate change,” he said. “Overall, he was selling bullshit, and perhaps he knew that, but he thought that climate scientists were exaggerating, so he continued even as facts piled up against him. If only he had been right.”

Michaels frequently portrayed academic researchers in climate-related fields as being corrupted by or beholden to funding that incentivized them to produce alarming research.

He made those claims even as he, or the institutions that employed him, were funded by the Koch brothers network, the Mercer Family Foundation, Exxon Mobil Corp., the coal industry and shadowy conservative foundations that oppose regulations, among others.

To this day, there are signs of Michaels’ influence.

Republicans and some conservative Democrats continue to reject or cast doubt on decades’ worth of studies that show the increasingly dire consequences of a warming world. Those who acknowledge the reality of climate science often justify inaction by exaggerating doubt in the research.

Michaels, who served as Virginia’s state climatologist for almost 30 years, helped to publicly nurture those divisions since the George H.W. Bush administration.

He was a frequent guest on Fox News, brought on by hosts who wanted someone to criticize or question the latest climate science research. He worked for a number of think tanks and interest groups that have sought to defeat fossil fuel regulations. And he frequently appeared at conferences for denier groups, such as the Heartland Institute, where he would address audience members who largely refused to accept that unabated warming will reshape human habitation of the planet.

Michaels focused his criticism on the fundamentals of climate science, often ignoring evidence that would disprove his claims. In particular, he went after climate modeling of future conditions, which he claims ran hot, despite evidence from NASA that demonstrated the models were largely accurate.

Michaels was long employed by the Cato Institute, the libertarian think tank co-founded by Charles Koch, but he left abruptly in 2019 after it shut down its work attacking climate science. He went to work for the CO2 Coalition, which promotes the idea that a warmer planet will benefit humanity and that more fossil fuels should be burned. He also worked as a senior fellow for the Competitive Enterprise Institute, which fights climate regulations.

It was during the administration of President George H.W. Bush that Michaels may have played his most meaningful role in polarizing climate policy.

At the behest of Bush’s chief of staff, John Sununu, Michaels and other climate science critics played an instrumental role in shifting Republicans away from climate policy and toward skepticism and outright denial.

When Bush was elected in 1988, climate policy was a bipartisan issue. A few months earlier, Hansen had given groundbreaking testimony in front of a Senate committee in which he warned that the Earth was warming at a rapid pace and that humans were the reason.

During his campaign, Bush said addressing global warming would be a priority for his administration. At the beginning of his term in office, Bush pledged to hold an international summit on climate policy.

But Sununu encouraged Michaels and others to highlight doubt and uncertainty in climate briefings for White House officials. Sununu ran his own rudimentary climate models and promoted the views of Michaels, who was already receiving industry funding, over the work of NASA scientists. At the same time, Hansen’s dire warnings from NASA now were being toned down by political officials before they could be presented to the public.

Bush eventually held the summit, in 1990, on “global change,” meaning climate change. In addition to acknowledging the views of Hansen and other like-minded climate scientists, the White House also pushed out statements that echoed Michaels’ own emphasis of doubt.

The brief era of bipartisan climate policy was over — with Michaels’ help.