Pelosi locking out Trump is one for the history books 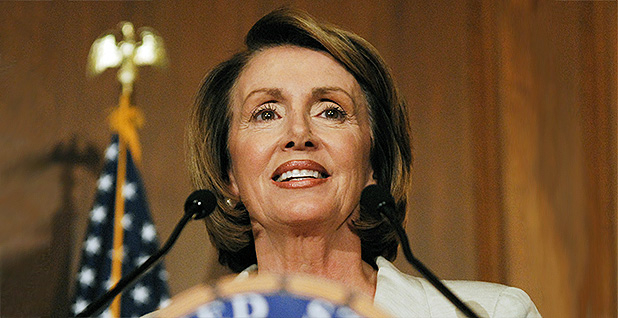 House Speaker Nancy Pelosi (D-Calif.) in 2008 when she refused to entertain Republican calls for a session to debate oil drilling. Alexis C. Glenn/UPI/Newscom

President Trump has compared himself to the late President Reagan on many occasions — from his mental acuity to his draw at the ballot box — so why not turn to the GOP idol in his latest spat with House Speaker Nancy Pelosi?

The California Democrat yesterday withdrew her invitation for Trump to address Congress from the House, reiterating her concern over the continued partial government shutdown. Trump had planned to give his annual State of the Union speech on Jan. 29.

"I am writing to inform you that the House of Representatives will not consider a concurrent resolution authorizing the President’s State of the Union address in the House Chamber until government has opened," Pelosi wrote in the brief missive, adding that the House will seek a "mutually agreeable date" once the funding spat has concluded.

While Pelosi’s rejection marks the first time the State of the Union address could be delayed, the incident isn’t unique — former House Speaker Tip O’Neill (D-Mass.) rejected Reagan’s request to speak to House lawmakers in June 1986.

After O’Neill rebuffed the chief executive’s attempt — which was intended to gain support for funding the Nicaraguan rebels known as Contras — Reagan wrote in his diary: "Tip refused to let me speak to the House. I’m going to rub his nose in this one."

Eventually, Reagan opted for a television address, according to a summary in Chris Matthews’ 2013 book "Tip and the Gipper: When Politics Worked."

Former House Historian Ray Smock, who served in that post at the time of the spat between Reagan and O’Neill, said that no president has ever addressed a single chamber of Congress.

"Tip O’Neill said, ‘You can come up. I’ll give you a joint session any time you want to but it would be unprecedented for you to come and speak only to one chamber,’" Smock recalled in an interview with E&E News.

He added: "It was a big headline that Tip O’Neill had refused the president the opportunity to speak before Congress."

Smock, who retired last year as director of the Robert C. Byrd Center for Congressional History and Education at Shepherd University, said there is little difference in the current dispute over Trump’s anticipated State of the Union speech.

"The president can’t speak at the Congress without the permission of Congress," Smock said. "This is a separation of powers issue."

The speaker of the House claims control of the chamber’s floor — including its lights, camera feed and even the locks.

That power has come into play in recent history when members of both parties have attempted to stage protests on the floor.

In August 2008, House Republicans refused to vacate the chamber over their demands for a vote on energy legislation (E&E News PM, Aug. 4. 2008).

"Tell your friends the Republicans refuse to go quietly!" Vice President Mike Pence, then a Republican lawmaker from Indiana, shouted on the House floor according to The Washington Post.

Utah Rep. Rob Bishop, the top Republican on the House Natural Resources Committee, recalled the protest in vivid detail to E&E News — in part because he spoke on the floor in flip-flops and shorts.

"I wasn’t the first one in shorts," Bishop recalled, noting that a fellow Republican had done so. "But I fulfilled my life’s dream of being able to speak on the floor, in a T-shirt, shorts and flips."

During the protest, Republican Rep. Virginia Foxx of North Carolina urged visitors into the chamber to sit on the House floor, filling seats normally reserved only for lawmakers.

But while Republican members remained in an unofficial session, Pelosi, then in her first term as speaker, kept the lights out, the microphones off and the cameras dark.

"Everything was done without lights on, without the mics on," Bishop recalled. "Members would go out, and they would invite tourists to come and sit down."

Democrats staged their own protest in the chamber in 2016 as part of a demand for gun control legislation in the wake of a mass shooting at a Florida nightclub.

But while then-Speaker Paul Ryan (R-Wis.) likewise turned off the chamber’s camera feed, lawmakers used their own mobile devices to stream the faux-session on Twitter and other social media services.

Whether Republicans could attempt a coup of the House floor — inviting the president as a guest to the chamber — remains to be seen.

House Minority Leader Kevin McCarthy (R-Calif.) authored a resolution yesterday to allow Trump to give his speech as planned on the 29th.

"This resolution I’m about to sign would allow the State of the Union to go on as planned. Let me know if you agree," McCarthy said in a video posted to his Twitter account.

But in that event, Smock said Pelosi could essentially opt to lock out the chamber — not just turn off its cameras, microphones and lights.

"When the president comes to the Capitol, he is a guest of another branch of government," Smock said. He pointed to the bicameral resolution needed to approve the address: "It’s more than just a courtesy. It’s a matter of constitutional practice."

Smock later added: "This is it. She’s just going to have to tell him that he can’t just do whatever the hell he wants. She’s the boss in that chamber. Period."

Past presidents have, however, made brief and informal appearances on the floors of both the House and the Senate, Smock said.

Generally, however, those presidents were also former lawmakers, like Presidents Truman and Ford, who served in the Senate and the House, respectively.

"The president could come to the Capitol for meetings," Smock said. He noted that during one such event, Truman was meeting with senators when one "dared him to go out on the floor."

Similarly, Smock said Ford once made an impromptu visit to the House floor during meetings with lawmakers.

"It was sort of like, ‘Welcome back, Gerry Day.’ They were glad to see him, and they were shaking his hand," Smock said of the former House speaker. "But he didn’t come there to give a speech or make a policy statement."

Presidents have routinely addressed a joint session of Congress in person since President Wilson resumed the custom in 1913, and the event has been a prime-time television event since President Johnson adopted the practice to take advantage of larger audiences.

Smock added: "There’s never been a case where a president came to give a major address before a joint meeting or a joint session of Congress when there was not a concurrent resolution to approve that."

Late last night the president tweeted that he would wait to deliver the speech and said he was not looking for an alternative venue "because there is no venue that can compete with the history, tradition and importance of the House Chamber."