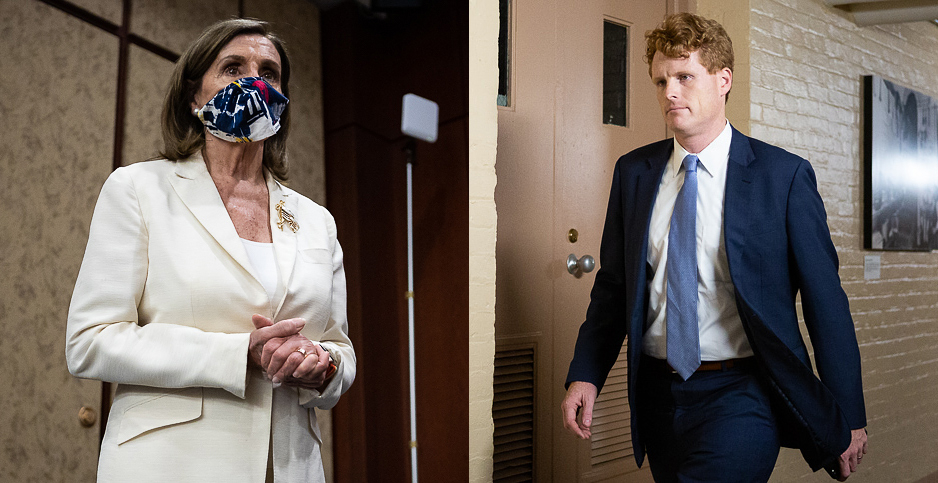 "Massachusetts and America need Joe Kennedy’s courage and leadership in the Senate to fight for the change we need," Pelosi said in a video posted by Kennedy’s campaign.

The endorsement is a blow to Markey, who has become a progressive favorite for his leading efforts on behalf of the Green New Deal, along with Rep. Alexandria Ocasio-Cortez (D-N.Y.).

Markey has been endorsed by virtually every environmental group, and progressive organizers have staunchly defended him against Kennedy’s primary bid.

And notably, Markey was once at the forefront of Pelosi’s own efforts to pass climate legislation.

As a member of the House, from 2007 to 2011 he chaired the Select Committee on Energy Independence and Global Warming, a Pelosi brainchild that was widely seen as a way to circumvent Rep. John Dingell (D-Mich.), then-chairman of the Energy and Commerce Committee.

Markey went on to co-sponsor with Rep. Henry Waxman (D-Calif.) the 2009 "American Clean Energy and Security Act," the last major congressional effort to address climate change and a priority during Pelosi’s first speakership.

In recent years, however, Kennedy has raised big money for House Democrats and was a player on the campaign trail in 2018.

"In 2018, when we took back the House, Joe campaigned across America to make that victory possible," Pelosi said.

"I am honored to have Speaker Pelosi’s support in this race," Kennedy said of the endorsement. "There is no one who has stood up to Donald Trump and defended our Party’s values and our country’s future more."

The speaker has also in the past been dismissive of the Green New Deal. At one point early last year, she referred to it as "the green dream or whatever."

When Kennedy launched his campaign against Markey, he was immediately up roughly 10 points in the polls, in part due to his famous last name. The race, however, has tightened ahead of the Sept. 1 primary.

While there is very little ideological room between the candidates, both have sharpened their attacks in recent weeks, with Markey increasingly going after the support Kennedy has received from his family (E&E Daily, Aug. 10).