Pelosi takes easiest path on climate. Will she do more? 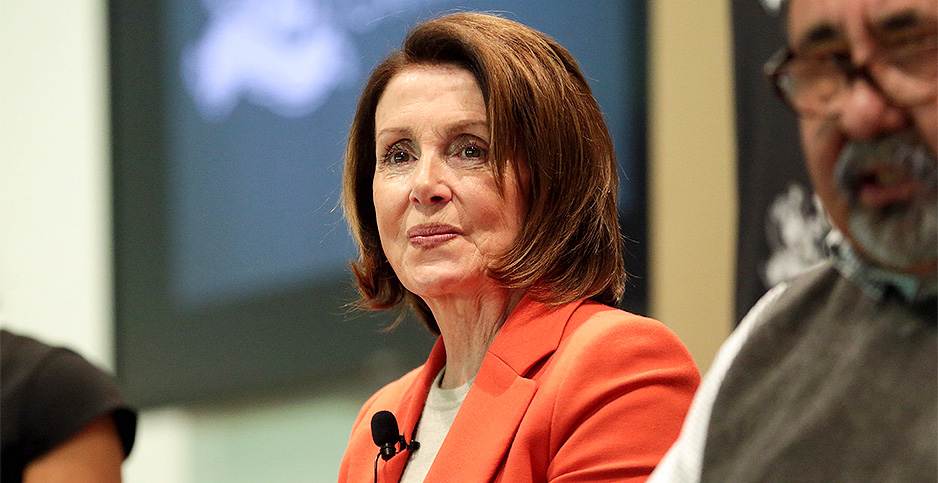 Speaker Nancy Pelosi (D-Calif.) is bringing a climate bill to the floor this week. Gage Skidmore/Flickr

The climate bill that House Democrats plan to vote on this week wouldn’t reduce a single ton of greenhouse gas emissions.

Instead, it aims to keep the United States in the Paris climate accord by barring President Trump from using federal funds to withdraw from the landmark agreement. But it has no chance of becoming law under Trump, and if a Democrat defeats him next year, it would become obsolete.

The entire Democratic field of presidential candidates has expressed support for the global deal agreed to by 195 nations in 2015. A New York Times survey of 18 Democrats seeking the presidency showed that none opposed U.S. participation in the deal, and former Vice President Joe Biden, who threw his hat into the ring on April 25, is likely to claim that the Obama administration’s role in brokering the accord is part of his legacy.

So, assuming Trump follows through on his 2017 threat to make the United States the only nation to stand outside of Paris — something he can’t do until the day before the 2020 election — his Democratic successor could reverse the decision with a stroke of a pen on Inauguration Day. And many 2020 Democratic hopefuls have said they would.

Why then did House Speaker Nancy Pelosi (D-Calif.) choose as one of her first 10 bills of the new Congress a measure that is neither necessary from a policy perspective nor likely to clear the GOP-controlled Senate?

According to its author, Rep. Kathy Castor (D-Fla.), H.R. 9 is about sending a signal to the world that at least part of the U.S. government still cares about fighting global warming.

"It is so important to let the American people know — and other folks across the globe — that America is still in [and] we are still committed to reducing greenhouse gas pollution," Castor, who chairs the House’s new climate committee, told E&E News.

Rep. Sean Casten (D-Ill.), another member of the Select Committee on the Climate Crisis, said the measure would defend the nearly two-decade legacy of U.S. global climate leadership that Trump’s Paris decision threatens to upend.

"Were we moving fast enough? No," he said. "Were we doing enough? No. But we were moving in the right direction."

The Paris bill "is essentially playing defense to restore what we had done before and then give us a platform where we can start building from there."

"We want to take action quickly," said the aide. "And the withdrawal from the Paris accord has been one of the Trump administration’s sort of signature abandonment of action on climate."

In addition to a prohibition on using funds to complete the Paris withdrawal, H.R. 9 also would require the executive branch to report annually to Congress on progress toward the U.S. commitment outlined in the accord. Where the 2015 deal allows countries to modify their pledges up or down, the bill would codify into law the Obama-era pledge to cut emissions 26% to 28% compared with 2005 levels by 2025, and it acknowledges the pledge is meant to be strengthened over time. The leadership aide said those provisions would require the Trump administration to formulate its own plan for climate mitigation, now that it has disassembled Obama’s climate policies.

But the aide hinted at other action later in Congress.

"It’s a first step. It lays the foundation for more action, so it’s not the period on the end of the sentence, it’s the beginning," he said.

In that regard, the bill doesn’t break new ground. It was described as both politically popular or overly cautious by climate advocates.

"It’s incredibly important that Democrats demonstrate that there is a unifying and popular action to take on climate change that is in direct contrast to what is happening today with our fed government," said Christy Goldfuss, who chaired Obama’s Council on Environmental Quality during the Paris summit and is now a senior vice president for energy and the environment at the Center for American Progress. "And that is why H.R. 9 and the first vote [on climate] in a decade is so important to getting us back on track."

There’s also this fact: It’s the easiest climate legislation available to Pelosi. It doesn’t confront divergent opinions among Democrats about the best way to reduce emissions, either through carbon prices, regulations or a sharp increase in renewable energy. And it’s not the Green New Deal, which elicited Republican attacks for suggesting that America could decarbonize in 10 years.

"It’s not that it’s wrong in and of itself," said Paul Bledsoe, a lecturer at American University’s Center for Environmental Policy and a Clinton White House adviser, referring to H.R. 9.

"It’s easiest for Pelosi to start with a symbolic vote on the Paris Agreement rather than the tough sledding of domestic policy," said Bledsoe.

But he said the international framing was weaker than domestic legislation, which would have done more to highlight the risks and opportunities associated with climate change. And he said legislation to take carbon out of the atmosphere at home would revive U.S. credibility abroad and put pressure on developing nations like China to stop "backsliding" and deliver on their global climate commitments.

Pelosi probably couldn’t have chosen a less controversial climate symbol than the Paris deal. A poll released last July by the Chicago Council on Global Affairs showed that 68% of registered voters wanted the United States to stay in the accord. Among likely Democratic voters, polls show near-consensus levels of support that justify Paris’ place in the early talking points of presidential hopefuls.

Meanwhile, the Green New Deal, an ambitious resolution introduced early this year in the House by freshman Rep. Alexandria Ocasio-Cortez (D-N.Y.), has exposed fault lines within Pelosi’s Democratic caucus. The resolution pairs a massive investment in low-carbon infrastructure with an overhaul of the U.S. welfare state. And its author has been at odds at times with Pelosi, who famously dismissed the blueprint as "the Green Dream."

While the Green New Deal has become a Republican punching bag in recent months, H.R. 9 has 224 co-sponsors.

Castor told E&E News she hoped the bill would be "a unifying effort, and hopefully we’ll have a good number of Republicans." Rep. Brian Fitzpatrick (R-Pa.) told E&E News yesterday that he intends to vote for the measure.

But while it’s uncontroversial, Sara Jordan, clean energy program director at the League of Conservation Voters, said it was meaningful that Pelosi included the Paris bill in her first 10 priorities.

"I think she has really come out of the gates fast with this new majority in the House," she said of Pelosi. "This vote this week is just another step in a lot of climate progress that she has led since becoming speaker again."

She noted that House committees have held 30 hearings on climate change since January.

But Erich Pica, president of Friends of the Earth, said the new Democratic majority would be judged on its ability to close an "aspirational gap" on climate change, rather than clinging to Obama-era policies that he said were inadequate in light of the technological and scientific advances of the last decade.

"I think that there is a policy inertia within the Democratic Party right now, particularly in the House," said Pica, who has been critical of the Paris Agreement.

While he didn’t criticize Pelosi for moving the Paris legislation first, Pica said H.R. 9 must be followed with more substantive climate action.

"I think Pelosi should put up a repeal of the oil and gas tax breaks fossil fuel subsidy bill like she did with H.R. 6," he said, referring to provisions stripped from the 2007 energy law. "There are a number of bills like that that she could put up that I think would force hard votes."

But forcing hard votes is precisely what Pelosi is trying to avoid.

Ten years ago, Pelosi presided over House passage of a cap-and-trade bill that would never see a vote in the then-Democratic-controlled Senate. Instead, Republicans used the vote to help them seize control of the House. Pelosi didn’t touch the gavel again until January.

Pelosi has been unclear about whether she plans to bring future climate legislation to the floor. Castor said House Democrats weren’t planning any stand-alone climate bills in the short term, but two other legislative packages offered a chance to address the issue.

The first would be a large infrastructure package, which was discussed yesterday at the White House. "It has to be clean and green," she said (E&E News PM, April 30).

The second would be through the annual appropriations process, which might include more funding for items such as clean energy research and development.

Casten of Illinois suggested that his party concentrate these next two years on combining incremental climate bills into one "coherent policy."

That way, if Democrats retake the upper chamber, "on day one of the 117th session, we have something that we can get through the Senate."

Correction: An earlier version of this story misidentified Sara Jordan of the League of Conservation Voters.