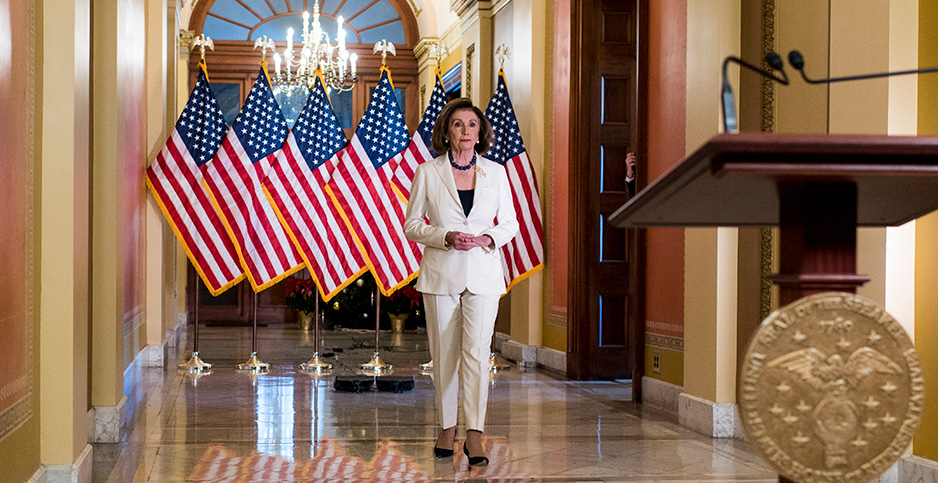 House Speaker Nancy Pelosi today said President Trump has abused the power of his office and asked committee leaders to draft articles of impeachment against him that will start to emerge next week.

"The facts are uncontested. The president abused his power for his own personal political benefit at the expense of our national security by withholding military aid and a crucial Oval Office meeting [for Ukraine] in exchange for an announcement of an investigation into his political rival," the California Democrat said this morning.

The House Judiciary Committee has set a hearing for Monday to hear from the counsels of the House Intelligence and Judiciary panels on possible articles of impeachment.

It’s possible Judiciary could then draft and vote on the articles next week, paving the way for only the third House vote in the nation’s history on impeaching a president.

Pelosi in a press conference later in the morning declined to offer a specific time frame or say specifically whether the articles would only cover the Ukraine scandal or perhaps also issues tied to Russian interference in the 2016 election.

Several lawmakers and constitutional scholars have said one of the charges is likely to be obstruction of Congress, which could cite the refusal of former Energy Secretary Rick Perry to comply with subpoenas in the impeachment inquiry.

Perry is a significant figure in the impeachment inquiry, meriting more than 50 mentions in the Intelligence Committee’s impeachment report released earlier this week that details allegations of abuse of power and misconduct by Trump in his dealings with Ukraine (E&E Daily, Dec. 4).

Asked by a reporter this morning whether she hated Trump, Pelosi angrily shot down the charge, ticking off a list of policy grievances with the president including his "denial about the climate crisis."

And then in a moment destined to be replayed endlessly, Pelosi wagged her finger at the reporter and scolded him, "As a Catholic, I resent you using the word hate in a sentence that addresses me. I pray for the president all the time. So don’t mess with me when it comes to words like that."