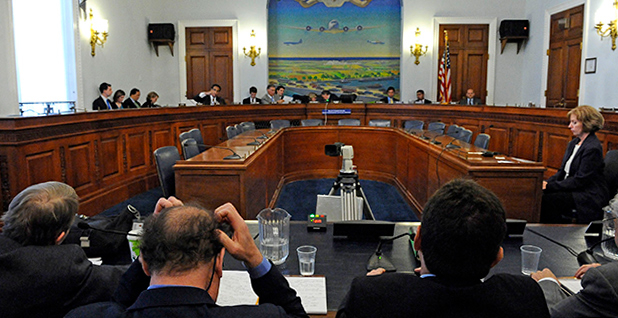 It was January 2007, and the California Democrat — then the House’s freshly minted speaker — created the Select Committee for Energy Independence and Global Warming, declaring that a warming climate had put the "future of our country, indeed our entire planet," at stake. She stressed that the new panel would have no legislative jurisdiction, an attempt to avoid the wars that inevitably come with any efforts to snatch turf from defensive committee bosses.

That wasn’t enough to smooth things over.

Led by then-Chairman John Dingell, senior leaders of the House Energy and Commerce Committee revolted. The Michigan Democrat famously derided the new panel as "about as useful as a fish with feathers." Other veterans on Energy and Commerce — and other Democratic committee leaders — were also wary that the new messaging panel with the speaker’s blessing could circumvent them.

But that was the whole point, according to former House Democratic staffers.

"It was very much looking at the landscape of what the progressive leadership wanted to do on energy and on climate and realizing that there was the most stubborn of all bulls standing between those goals and actual legislation — and his name was John Dingell," said a former Democratic staffer on the panel, who spoke on background in order to speak candidly.

The Washington Post reported that same year that Dingell, "a legendary defender of his committee’s prerogatives as well as the carbon-emitting auto industry of his home state — had made it clear that he expected to lead the party’s global-warming debate in a rather leisurely fashion. Pelosi was end-running him."

Republicans hated the select panel too. Texas Rep. Joe Barton, then the top Republican on Energy and Commerce, called it a platform for some lawmakers to grandstand.

"It will do nothing but muddy the waters and waste a lot of resources and the valuable time of the members who are selected to serve on it," Barton said then.

Publicly, Pelosi didn’t frame the new effort as an assault on Dingell’s authority.

She wanted to make climate change "a primary push of her speakership," said David Moulton, who was the select committee’s first Democratic staff director. So "without directly threatening or taking away any legislative jurisdiction from any of the committees that had the jurisdiction, she created this oversight committee."

She thought he would be effective at holding hearings to keep the issue prominent, Moulton said, which "ultimately would pressure all the members to think more seriously about climate than they had up until then."

Moulton recalled that Sensenbrenner had been "very anti-climate on the Science Committee, but it was interesting, his posture toward it on the committee itself was more cooperative than you would have expected." That helped with the "overall atmosphere of the committee," he added. "It was pretty collegial, in part because of him.

"I’m sure from the Republican perspective, having Sensenbrenner there was a way of sort of keeping an eye on us."

Despite critics’ grumblings, Democratic staffers who worked on the panel say they were victorious in steering the conversation about climate change.

"We could have any hearing on any topic at any time," that person added. "We were free."

The panel didn’t have a designated hearing room. Staffers had to ask other chairmen to use their rooms when they weren’t occupied, so they shuttled around between the Science and Technology, Ways and Means, and Education committees. "We bounced around," Moulton said.

One room was clearly off-limits. "We were not allowed to use the Energy and Commerce Committee room ever," he said.

Staffers had their offices at first in the Ford House Office Building (a disconnected building that’s widely considered undesirable among House aides), and then in the basement of the more central Longworth House Office Building. "Pelosi expelled an arm of the Republican Study Committee that was in the basement of Longworth, and we took that space," Moulton recalled.

Between March 2007 and December 2010, the committee held 80 hearings and briefings, according to an archived version of its website.

They hosted military experts, students from Alaska and Appalachia, and the chairman of the Nobel Peace Prize-winning United Nations Intergovernmental Panel on Climate Change, among many others.

Markey’s former staffers say the committee was instrumental in pushing aggressive fuel economy standards that were adopted in a 2007 energy bill, in scrutinizing BP PLC in the wake of the 2010 Deepwater Horizon oil spill (Markey’s staff posted a live "spillcam" on their website) and in helping usher the House’s 2009 cap-and-trade bill through the chamber. Markey co-sponsored that bill with former Rep. Henry Waxman (D-Calif.), who ousted Dingell as Energy and Commerce chairman in late 2008.

"There are many legacies, I think, of the select committee, but that is one of the biggest ones, to create the conditions where that legislation could pass," said the former staffer.

Former Rep. Rick Boucher, who was a top Energy and Commerce Committee Democrat at the time, disagrees.

"I’m hard-pressed to identify anything it accomplished," he said last week in an interview. Boucher, who hails from a coal-heavy district in southwest Virginia, was central to crafting the 2009 climate bill. He lost his race to his Republican challenger in 2010, and is now a partner at the law firm Sidley Austin LLP in Washington.

He said the activity that pushed the climate bill through the House in 2009 came from "Energy and Commerce work."

The select committee fizzled in late 2010, after Republicans claimed the majority.

Sensenbrenner wanted to keep the panel alive as a platform to investigate the Obama administration’s climate policies but was rebuffed by Republican leadership.

Now that her party has retaken control of the chamber, Pelosi wants to bring it back. She told The New York Times that its reincarnation would pave the way for energy efficiency measures and legislation to reduce emissions (E&E News PM, Oct. 31).

It’s unclear who would be in line to take the helm, although it’s likely to be someone close to Pelosi.

Among the names being floated are Democratic Reps. Paul Tonko of New York, Peter Welch of Vermont, Earl Blumenauer of Oregon, Diana DeGette of Colorado, Don Beyer of Virginia and Cheri Bustos of Illinois. Several sources said they think it’s more likely a woman would get the post.

Although it’s virtually impossible that broad climate change legislation would muster enough support from the GOP-controlled Senate and President Trump, it could lay the groundwork for legislation if a more receptive Senate and president take power.

From Pelosi’s perspective, "she’s thinking this is another one of those situations where I’ve got to elevate this issue myself in the public’s mind and explore what direction we can take," Moulton said. "What’s ultimately legislatively possible depends on public opinion here, so it makes sense to me that she would want to elevate the issue again."

The select committee is "a good vehicle for doing so," he added. "What it means legislatively, it’s harder to know."

House committees will have their hands full with oversight hearings, so this could offer Democrats a venue for climate messaging that other panels won’t have the bandwidth for.

"House Democrats have an unprecedented opportunity to focus a new select committee on bringing new ideas to the table that will lift up the wages of working families as part of a jobs-creating pro-environment agenda," said environmental consultant Jeremy Symons. "That’s a focus that cuts across areas of committee jurisdiction and is desperately in need of fresh ideas, new leadership, and a real commitment in this Congress and into the next elections."

Stephen Brown, a former House Democratic aide and oil refining lobbyist who’s now a consultant, said Democrats want to use the panel as a "PR safety valve for climate change."

"They’re not being very coy about it either," Brown said. "The idea would be the leadership does not want to do anything legislative on climate — it’s not a smart move. But they need to put an altar together for people to worship on in that caucus. … Politically, it’s much safer to talk about it ad nauseam and do nothing that’s controversial."

Pelosi would risk internal warfare if she tried to carve out jurisdiction for the panel, which would likely remain without the authority to write legislation.

Boucher, the former Energy and Commerce Democrat, wonders whether a messaging committee is worth having.

"If it’s just messaging, that’s the goal, then sure, it’s fine," he said. "But one would think that a committee established under congressional auspices would be more than a messenger."