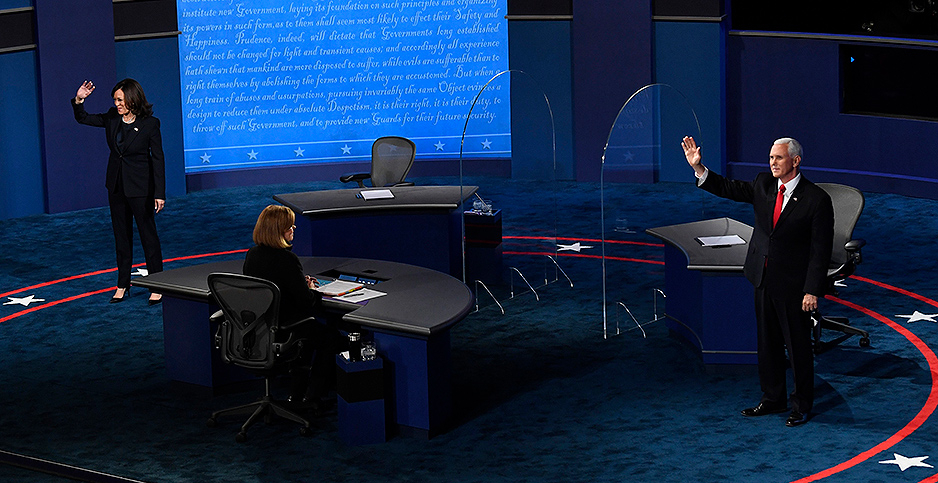 The two candidates vying to be the nation’s vice president debated extensively over fracking and climate change yesterday, issues Republican Mike Pence tried to make a liability for Democrat Kamala Harris, but which Harris worked to use to her advantage.

Like the first presidential debate last week between President Trump and Democratic nominee Joe Biden, climate change got its own segment and questions last night in the sole debate between Pence and Harris.

While the event was frequently tense, with the candidates jockeying for time and avoiding questions, it was more calm than last week’s encounter, featuring fewer insults and interruptions.

Without prompting, Pence repeatedly argued that Harris wants to ban fracking and institute the Green New Deal. She supported both concepts in the past but has disavowed them since becoming Biden’s running mate.

"They want to bury our economy under a $2 trillion Green New Deal, which you were one of the original co-sponsors of the United States Senate. They want to abolish fossil fuels and ban fracking, which would cost hundreds of thousands of American jobs all across the heartland," Pence said.

"You yourself said on multiple occasions when you were running for president that you would ban fracking," Pence continues.

The vice president told moderator Susan Page: "Joe Biden looked a supporter in the eye and pointed and said ‘I guarantee, I guarantee, that we will abolish fossil fuels.’ They have a $2 trillion version of the Green New Deal, Susan, that your newspaper, USA Today, said, really wasn’t that very different from the original Green New Deal."

Biden told an attendee at a September 2019 campaign event that he would "end fossil fuel." But he has also denied that he would seek to stop the production or use of fossil fuels in their entirety.

Harris accused Pence of outright lying on fossil fuels, though she didn’t respond directly on the Green New Deal. "The American people know that Joe Biden will not ban fracking. That is a fact. That is a fact," she said.

Pence’s fracking talk was likely targeted at voters in Pennsylvania, a crucial swing state. Trump and his allies have long sought to bring attention to what they see as the economic ruin that would come if fracking ended.

Biden, in turn, has sought to reassure Pennsylvanians on numerous occasions that he would not seek to eliminate the oil and gas recovery process that has driven recent oil and gas booms in numerous areas. Biden’s wife, Jill, is planning a visit to Pennsylvania tomorrow, with two stops.

Harris went on to present Biden’s climate plan both as a strong answer to a major threat and as an economic driver.

"Let’s talk about who is prepared to lead our country over the course of the next four years on what is an existential threat to us as human beings. Joe is about saying we’re going to invest that in renewable energy, which is going to be about the creation of millions of jobs. We will achieve net-zero emissions by 2050, carbon neutral by 2035. Joe has a plan," she said.

"This has been a lot of talk from the Trump administration, and really it has been to go backward instead of forward," Harris said. "We will also reenter the [Paris] climate agreement with pride."

But when Pence was asked directly to weigh in on his own climate views, he went against established scientific findings that human-caused greenhouse gas emissions are far and away the main driver of climate change.

"The climate is changing. The issue is, what’s the cause, and what do we do about it," he asked, before attacking Harris and Biden’s proposals like reentering the Paris Agreement.

He blamed the increasingly intense wildfires in the West on mismanagement of forests, denying that the fires or stronger Atlantic hurricanes have any connection to climate change — again rejecting scientists.

"Many of the climate alarmists use hurricanes and wildfires to try and sell the bill of goods of the Green New Deal," Pence claimed.

The clash came as Pence has repeatedly sought to draw contrasts between the more liberal record Harris had as a candidate and her decision to adopt Biden’s more centrist positions.

Trump bashed Harris’ energy record as soon as Biden chose her as his running mate, telling reporters in August that Harris opposes fracking and "petroleum products."

"How do you do that and go into Pennsylvania or Ohio or Oklahoma or the great state of Texas?" he said at the time. "She’s against fracking. Fracking is a big deal."

Harris has been critical of fracking and as California’s attorney general filed suit against the Obama administration over the Interior Department’s permitting program for fracking off the Pacific Coast.

As a presidential candidate, she went further than Biden when it comes to support for ending the practice, telling a CNN town hall in September 2019 that there was "no question" that she favored banning fracking, "starting with what we can do on day one around public lands."

Harris’ climate change plan released that month did not call for a ban.

Harris told CNN’s "State of the Union" last month that she would support Biden’s more centrist approach, saying that hydraulic fracturing provides "good-paying jobs in places like Pennsylvania" — the Rust Belt state that both campaigns are courting.

Recent polls in the state have shown Biden with a slim but consistent edge in Pennsylvania, prompting Trump to lash out Tuesday at his challenger on Twitter.