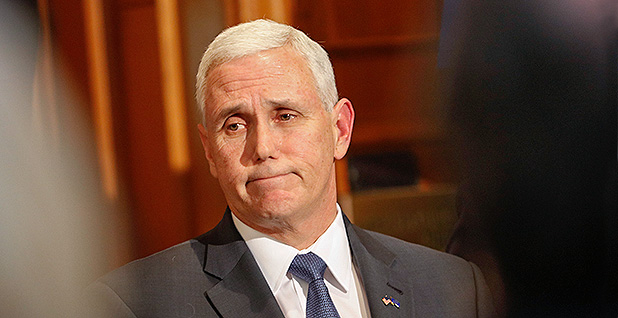 Vice President-elect Mike Pence is seen at the Indiana Statehouse in March, where as governor he spoke about Carrier Corp.'s decision to move jobs to Mexico. Photo courtesy of AP Images.

A decision by Carrier Corp. to keep its gas furnace plant — and 1,000 jobs — in Indianapolis is seen by some as proof that President-elect Donald Trump will fulfill a promise to reinvigorate the U.S. manufacturing sector by rolling back burdensome regulations.

Trump and his vice president-elect, Indiana Gov. Mike Pence, are set to join company officials to make the formal announcement in Indianapolis today, the company announced via Twitter.

Carrier yesterday announced that economic incentives offered by the state were key to keeping operations in Indianapolis rather than move them to Mexico. Other reports suggest defense contracts with Carrier’s parent company, United Technologies Corp., played an important role.

Either way, the incoming administration is expected to use the occasion to reinforce a campaign promise to make the United States more business-friendly.

Carrier itself said the decision to maintain the Indianapolis plant was "possible because the incoming Trump-Pence administration has emphasized to us its commitment to support the business community and create an improved, more competitive U.S. business climate."

Yet Pence ignored a plea by Carrier and other manufacturers two years ago to save jobs by leaving Indiana’s energy efficiency standard intact.

The utility-based measure made Indiana the first state to roll back an energy efficiency mandate — one put in place by fellow Republican Gov. Mitch Daniels.

The manufacturers, including General Electric, Honeywell International Inc. and Siemens, warned in a letter to the governor that allowing S.B. 340 to become law would have consequences. Specifically, they warned it would cost the state more than 1,500 direct and indirect jobs and more than $500 million in economic investment each year.

"Indiana is home to businesses who manufacture energy efficient equipment such as chillers, air-conditioners, and heaters and to companies that make industrial facilities more efficient," the companies said.

"We urge you not to hastily eliminate efficiency from the state’s energy plan, and to allow for a dialogue with Indiana businesses who believe that such a standard is a solution for wasteful energy spending and high costs," they wrote.

Another bill signed by Pence last year left it to electric service providers to propose their own efficiency programs, budgets and goals subject to regulatory approval (EnergyWire, April 13, 2015).

There is no evidence of whether, or how many, jobs were lost as a result of the efficiency legislation in Indiana.

But Martin Kushler, senior fellow at the American Council for an Energy-Efficient Economy, said energy savings achieved by investor-owned utilities in Indiana have tailed off since S.B. 340 took effect.

"They’ve saved about half as much as they would have under the old standard," he said.