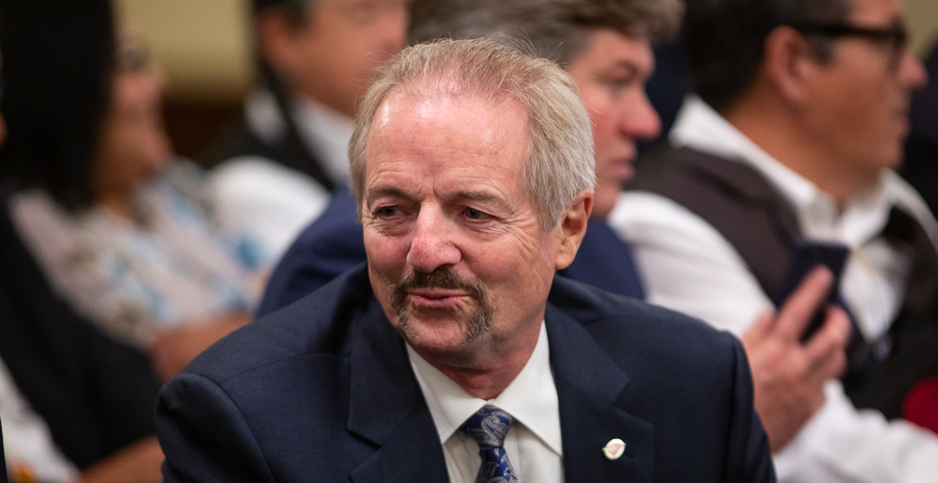 William Perry Pendley, the acting director of the Bureau of Land Management, declared that his agency’s law enforcement personnel will "maintain deference" to local officials — echoing critics who have sought to rein in the bureau’s authority.

Pendley made the statement in an op-ed published earlier this month in the Las Vegas Review-Journal.

"Today, the bureau is committed to exceeding the expectations of the American people that federal law enforcement professionals are paragons of truly dutiful and dedicated public service," Pendley wrote.

"To this end, the bureau is reaching out to local sheriffs to ensure that Rangers recognize that, although local law enforcement bears primary responsibility for enforcing state and federal law, Rangers are there to assist — lending their expertise to better local communities," he continued. "Rangers, therefore, partner with local law enforcement, while recognizing that counties are a governmental-arm of sovereign states. Maintaining that deference is essential to making BLM a truly productive and valued partner to Western communities."

An Interior Department spokeswoman said Pendley’s remarks do not indicate a change in policy, which BLM describes on its website as working with its "counterparts" in state and local law enforcement, as well as other federal agencies.

"BLM law enforcement professionals continue to be counterparts and provide assistance to all of their law enforcement partners — county, state, and federal; deference to partners is naturally appropriate when the issue or situation is outside the purview of BLM’s federal law enforcement role or capacity," said Interior spokeswoman Melissa Brown.

"As deputy director of BLM, Mr. Pendley serves at the pleasure of the president and the secretary, and thus is fully committed to following their direction and advancing their positions and policy goals," she added.

Pendley, who serves as BLM’s deputy director of policy and programs, has recited a similar argument when defending his past criticism of federal land management, including remarks made during his tenure at the helm of the Mountain States Legal Foundation (Greenwire, Sept. 6).

Although Pendley has served as the agency’s de facto acting director since July, and the White House has completed a formal background review of the Wyoming native, Trump has not nominated him for BLM’s top post (Greenwire, Nov. 11).

Brown told E&E News that Interior is still contemplating an overhaul of BLM’s law enforcement, which includes about 200 uniformed officers and 70 special agents to patrol 245 million acres of public lands.

"The BLM continues to evaluate potentially reorganizing its law enforcement organization if doing so would better serve the American people and protect public lands and resources, but no final decision on reorganization or relocation has been made at this time," Brown said.

That process has been underway since at least early 2018, when Pendley’s predecessor, Brian Steed, raised it in testimony to the Senate Energy and Natural Resources Subcommittee on Public Lands, Forests and Mining.

At the time, Steed said BLM wanted to improve its relationship with local police and the Western State Sheriffs’ Association and had directed its officers to focus on "casework with direct ties to public lands" such as cross-border smuggling activities and the theft of historic objects (Greenwire, May 9, 2018).

"If the secretary were here, he would tell you that this is one of his strong priorities, as well," Steed said, referring to then-Secretary Ryan Zinke. "He doesn’t want people to fear Department of Interior law enforcement. He wants people to see that they’re out there trying to do doing their jobs and manage resources."

Then-Rep. Jason Chaffetz (R-Utah) twice introduced legislation that would have terminated the agency’s rangers, as well as another 700 officers employed by the Forest Service, and instead given block grants to states to enforce federal laws on public lands (Greenwire, Feb. 10, 2017).

"This issue is of great concern to communities throughout the West, including many in my state and neighboring states, that have long struggled against the constraints imposed by vast federal land holdings," Lee said. "Increasingly, these communities find themselves as targets of overly zealous federal law enforcement operations."

According to a report from the Mesa County Sheriff’s Office, the two officers were returning from a firing range on BLM lands near Grand Junction, Colo., in 2018 when they stopped to conduct a welfare check on a van parked on a dirt road.

The incident turned violent when the van’s driver shot one of the officers, hitting his protective vest. The suspect in that incident was killed.

But John Freemuth, the Cecil D. Andrus endowed chair for environment and public lands at Boise State University, expressed concern that Pendley’s vow of "deference" could endanger BLM rangers and other staff.

"He revved up the crazies with that statement," Freemuth said, "Now some nut job could confront [BLM rangers] with, ‘Well, your boss said you’re subservient.’"

Freemuth added: "You just created a bad situation for these people."

In particular, Freemuth said Pendley’s comments could prove problematic in communities that have embraced the idea of a local sheriff as a sovereign power.

That philosophy, embodied by groups such as the Constitutional Sheriffs and Peace Officers Association, endorses an interpretation of the Constitution in which federal agencies are subordinate to state and local officials.

"It’s kind of a head-scratcher to me," Freemuth said. "If he hadn’t included that last part, I would have said, ‘Good for Pendley for backing his people,’ but instead, he undermines them."

Freemuth himself served as an unarmed National Park Service ranger in the late 1970s at Glen Canyon National Recreation Area and recalled working in tandem with the Arizona state police.

"It was a law enforcement community that worked together and had established relationships in terms of who had what jurisdiction," Freemuth recalled. "They establish these working relationships over time where they understand each other’s roles and they back each other up … but they’re not subservient."

Freemuth also noted that BLM rangers in particular are tasked with a wide range of responsibilities, a challenge given the relatively small number of staff for the enormous area the agency oversees.

"It could be as simple as a lost hiker or somebody who got hurt who needs a rescue, or you’ve got nuts out there, drug labs, whatever you want, and they have to confront this," Freemuth said. "They need to feel people have their backs up the chain and will support them."

"This unnecessary power grab further proves that Pendley holds fringe, extremist views, is circumventing the law of the land, and is unfit to be employed by the federal government," O’Neill told E&E News. "Pendley has no business collecting a taxpayer-funded paycheck and pension. President Trump should do us all a favor: Drain the swamp he created and send Pendley packing."

O’Neill pointed to sympathetic comments Pendley made in 2014 to the conservative website Newsmax in which he called the armed standoff between BLM agents and rancher Cliven Bundy "a massive overreaction by the federal government."

The standoff occurred after BLM attempted to seize Bundy’s cattle for auction to satisfy decades of unpaid grazing fees and trespass fines.