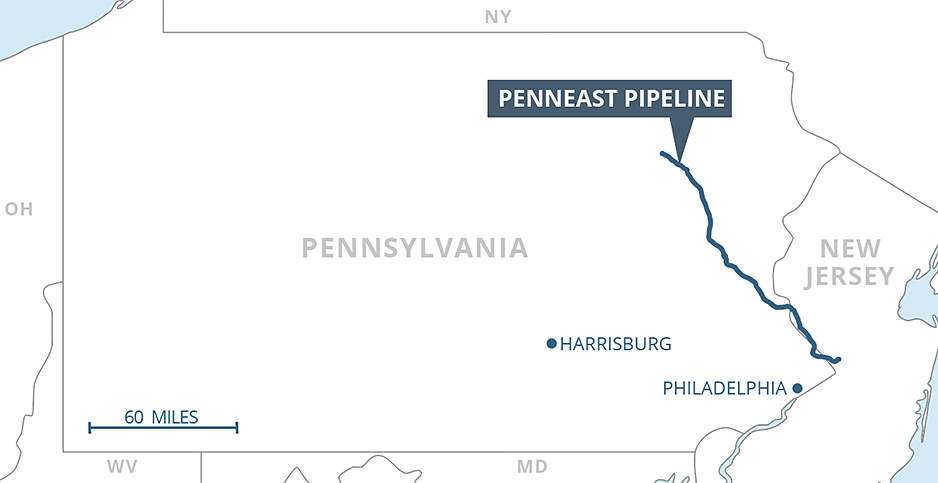 The developer of the PennEast pipeline won’t use eminent domain power to acquire state-controlled land in New Jersey, prompting questions about the fate of the project three months after it scored a key win in the Supreme Court.

But PennEast has now "agreed in principle to a stipulated voluntary dismissal" of the condemnation proceedings, according to a letter filed yesterday in the 3rd U.S. Circuit Court of Appeals by acting New Jersey Attorney General Andrew Bruck (D).

"As such, the parties request that all forty-two (42) of these matters be sent back to the District Court for purposes of effectuating that stipulation," Bruck wrote.

The 3rd Circuit, which ruled in 2019 that state sovereign immunity prevented PennEast from suing New Jersey for the lands, yesterday sent the case back to the lower bench.

PennEast said it still plans to move forward with the pipeline and is instead "exploring" the dismissal of condemnation proceedings with attorneys for affected landowners.

"PennEast believes it is not prudent to complete the acquisition of the rights of way in the pending actions as it might not be necessary for some time," spokesperson Pat Kornick wrote in an email.

Legal proceedings would start again "once it clears the regulatory hurdles and has a better understanding of when it would need to acquire the property interests," she continued.

Opponents of the pipeline speculated that PennEast could be planning to cancel the project.

"I know they’re claiming that they’re not abandoning the project, but to not move forward with taking these state lands after getting the Supreme Court to back their ability to do so is pretty telling," said Tom Gilbert, campaign director for the New Jersey Conservation Foundation.

The 3rd Circuit filing comes a month after PennEast floated the prospect of dropping eminent domain proceedings against property owners in a separate case in the U.S. District Court for the Eastern District of Pennsylvania.

In that case, PennEast offered a similar explanation for why it was considering a pause in the condemnation proceedings. Project opponents had questioned the rationale, saying it seemed likely the company would announce either a cancellation or major rerouting of the project (Energywire, Aug. 16).

A decision in the Pennsylvania case is still pending, according to Anthony Corby, an attorney for some of the affected landowners in that dispute.

If PennEast chooses to resume the process of seizing land for its pipeline, the developer would have to start from scratch, said Jennifer Danis, an attorney representing the New Jersey Conservation Foundation.

"It’s interesting to hear PennEast describe this as pausing the project due to regulatory uncertainty," she said. "It has been our view from the data in the record all along that the project cannot be built consistent with Clean Water Act standards."

PennEast has a pending permit application before the Federal Energy Regulatory Commission to split pipeline construction into two phases — one in Pennsylvania and one in New Jersey.

But even if PennEast were to pursue a phased approach, the developer still lacks a key water permit from the Army Corps of Engineers in Pennsylvania, said Gilbert of the New Jersey Conservation Foundation.

"So their prospects for a phase one of the project are not better than the original project," he said.

FERC has already said that it does not have jurisdiction to split up the project while the commission’s underlying approval for the pipeline is being challenged in federal court, other legal experts noted.

The U.S. Court of Appeals for the District of Columbia Circuit revived the legal challenge over FERC’s approval of PennEast after the Supreme Court allowed the developer to move ahead with seizing the New Jersey land.

It’s possible that either PennEast or the environmental groups challenging the project’s FERC certificate could request that the matter be sent back to the agency, said David Bookbinder, senior counsel at the Niskanen Center and a landowner attorney in the PennEast litigation.

Yesterday’s letter is "further evidence that PennEast is at least contemplating throwing in the towel," he said.