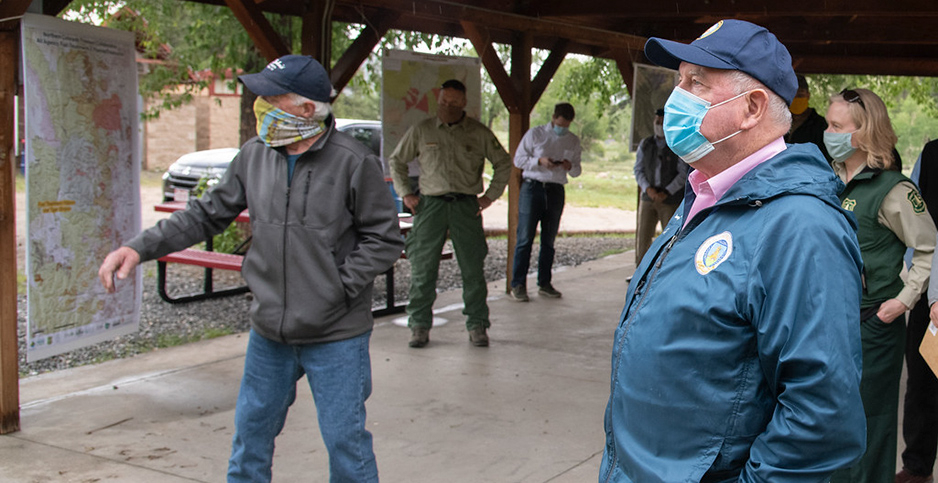 Agriculture Secretary Sonny Perdue, pictured to the right, wants regional foresters to get in line with his vision for forestland management. Lance Cheung/Department of Agriculture/Forest Service/Flickr

Agriculture Secretary Sonny Perdue has asked regional foresters to step up efforts to implement his "vision" for forestland management at the same time the Forest Service is posting a call for applications for their jobs.

Two regional forester positions — in the Intermountain region and the Southwest — are actually vacant due to retirements, the Forest Service told E&E News. But all nine are currently advertised as vacant on USAJobs.gov.

The other seven are being advertised through Aug. 27 in an effort to "be prepared with a pool of candidates for consideration if other critical leadership positions become vacant in the near future," the service said. The posting on USAJobs.gov — posted a week ago today — remains open to applicants for up to a year, following Office of Personnel Management guidelines, the Forest Service said.

Officials advertised the vacancies four days before Perdue sent each of the nine regional foresters a memorandum prodding them to do more to pursue the administration’s "vision," which includes increased forest thinning, more timber production, more grazing of livestock and shorter environmental reviews on land the Forest Service oversees.

An agency spokesperson said the memo and the job postings aren’t related, but it prompted some worries in the ranks that the secretary was getting ready to clean house.

Perdue’s memo also comes as the Forest Service falls short of timber harvesting goals, despite directives from the Trump administration and some members of Congress to increase sales from national forests.

In the memo, Perdue reminded the foresters of his June directive in which the secretary outlined those goals (E&E News PM, June 12).

Perdue — bypassing Forest Service Chief Vicki Christiansen — asked the regional foresters to answer a series of questions about how they intend to meet the goals and added, "I want to hear from you directly on how you are progressing in implementing the vision."

The regional foresters have until Aug. 31 to reply.

"The advertisement is in anticipation of normal agency attrition and has no connection to the Secretary’s memo," the Forest Service told E&E News.

But current and former Forest Service officials said the concurrent timing led to speculation that jobs might be on the line and that a pool of potential candidates would be in place if regional foresters’ answers don’t satisfy the secretary.

One senior Forest Service official who spoke to E&E News on the condition of anonymity called the memo "very brutal," though Perdue took a congenial tone and thanked the regional managers for their efforts to date.

A letter from the secretary of Agriculture to regional forest managers is unusual, former Forest Service officials said.

But Perdue has expressed a personal interest in many of the related issues, and President Trump has taken up forest policy in speeches and in an executive order.

Among the top questions Perdue said he wants answered:

Regional foresters are not political appointees but senior executive level employees who can be moved into new positions at the administration’s discretion. All "SES" employees sign a statement acknowledging that.

A shuffle of senior executive positions wouldn’t be unprecedented with a potential change of administration coming in January, former Forest Service employees said.

A Forest Service spokesperson said the agency has used a similar approach in the past for leadership positions such as forest supervisors, though people who work with the Forest Service said they’ve rarely seen regional forester positions posted publicly. Regional foresters are paid between $175,501 and $186,500 a year, according to the job posting.

Regional foresters are a key piece of the Department of Agriculture’s management of the national forest system’s 193 million acres of wildlands. They bring the administration’s forest policies to the field and are a point of contact for state and local officials. They also hire and fire the foresters for each national forest.

Some oversee as many as a dozen national forests at once, making decisions that affect forest ecology across vast areas — and they develop working relationships with state forestry departments.

"I’ve always considered it to be a really important position," said Laura McCarthy, New Mexico state forester. New Mexico is in Region 3, home to one of the job vacancies.

In that region, McCarthy said, the regional forester has managed negotiations with environmentalists suing to protect the Mexican spotted owl, for instance. "We’ve been kind of a region in crisis."

The vision Perdue laid out in June has run into the realities of tough international market conditions for wood products, as well as the COVID-19 pandemic. The Forest Service is on track to miss its timber targets as a result, according to industry and agency sources.

Through the first three-quarters of fiscal 2020, the Forest Service has sold 1.194 billion board feet of timber, less than in any of the four previous years, the agency reported.

In the Pacific Northwest region, the agency has attained just 58% of its timber target with two months to go in the fiscal year, said Dan Shively, the region’s natural resources director, in an Aug. 3 memo to forest supervisors.

"It’s clear that all of you are working extra hard this year under our COVID-19 challenges delivering not only the timber program but also a broad portfolio of integrated restoration activities and other work that remains critically important to our partner agencies, NGOs, communities, and the public we serve," Shively said. A recent upturn in market conditions could help, he said.

Perdue, who told lawmakers two years ago that he wants USDA to be "the most customer-focused department in the entire federal government," reiterated that priority in his memo, saying the department’s "customers" want a Forest Service that’s accessible, responsive and solutions-oriented.

He inquired what each regional forester is doing "to ensure a culture of customer service extends through every level of your operation."

He also asked them to identify "the key stakeholders in your region," and to answer, "what are you doing to improve your staff’s, your region’s and your personal relationships with them?"

Timber companies, state forestry officials and some conservationists cheer Perdue’s emphasis on more intensive forest management, which they say could prevent catastrophic wildfires and protect watersheds, among other benefits.

The secretary’s memo looks like "pure intimidation," said Randi Spivak, public lands director for the Center for Biological Diversity. "Any regional forester who doesn’t dramatically increase logging or curry favor with the livestock industry better polish up their resume."