Perfect energy — if we can harness ‘a miniature sun’ 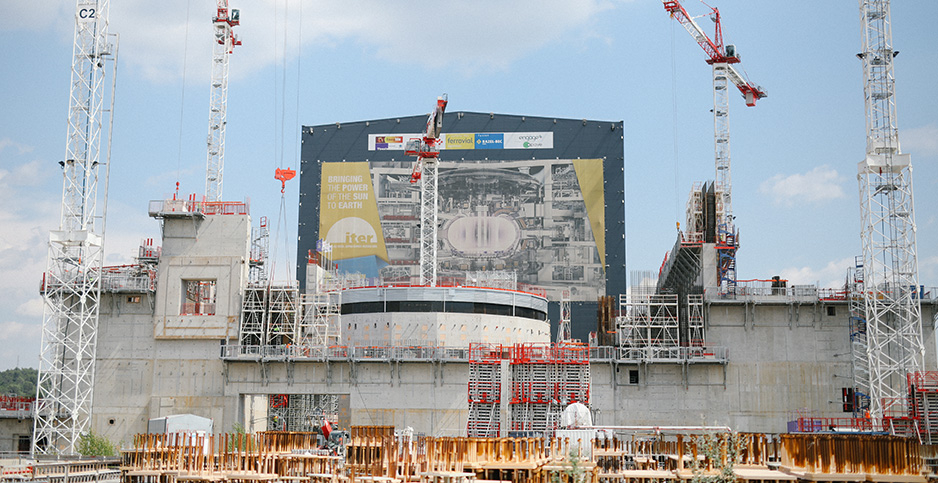 Thirty-five nations are collaborating to build the International Thermonuclear Experimental Reactor in southern France. A new report urges the Energy Department to remain in ITER and start a national plasma research program in the United States. SNC Engage/Flickr

A panel of 19 scientists drawn from the National Academies of Sciences, Engineering and Medicine recommended yesterday that the Department of Energy should continue an international experiment on nuclear fusion energy and then develop its own plan for a "compact power plant."

The experts envision that it could become a model for future plants.

"We are seeing tremendous progress being made in the path to achieving fusion energy around the world," said Michael Mauel, a professor of applied physics at Columbia University and co-chair of the panel. "Now is the right time for the U.S. to benefit from the investments in burning plasma research and take leadership in fusion energy."

The success of a reactor that can produce electricity from nuclear fusion will have major importance in the fight against climate change. If it emerges as projected around 2050, a commercial version of the plant would produce almost emission-free energy because its main fuel consists of two hydrogen isotopes — deuterium and tritium
— that can be obtained from water.

Unlike current nuclear power plants, which get their energy by splitting slightly enriched fuel from uranium — a process called fission — a fusion plant derives energy from forcing two hydrogen atoms together. It’s the same process that powers the sun. While conventional nuclear power creates a large amount of long-lived and toxic nuclear wastes, a fusion-powered plant is expected to create almost none.

The success of harnessing fusion power would also have major economic implications because countries that develop and commercialize it may enjoy considerable benefits from cheaper electricity and from deploying related scientific innovations that are expected to come with the so-called nuclear power plant of the future.

But as the National Academies’ report noted, major challenges must be overcome to reach these goals, beginning with how to contain and control a burning "plasma" of extremely hot gas, ranging from 100 million to 200 million degrees Celsius, that can produce more heat than it consumes. The report calls the resulting plasma "a miniature sun confined inside a vessel."

The world’s biggest experiment intended to create and draw energy from burning plasma is under construction at Cadarache, France. It’s called the International Thermonuclear Experimental Reactor (ITER) project, and its centerpiece is a large, doughnut-shaped, Russian-inspired reactor called a tokamak. The idea is to use a powerful magnetic field to hold the super-hot plasma in place — so its heat can be extracted without incinerating the walls of the reactor.

The National Academies report notes that ITER came together in 2007 with help and financing from a consortium of parties, including the United States, Russia, China, India, the European Union, Japan and South Korea. In its early years it experienced major cost overruns, and by 2013, its "schedule had slipped by more than a decade," according to an earlier NAS report.

Several member nations have already developed their own national programs, and the assembled National Academies experts concluded that the United States should eventually follow, once the ITER experiment shows there are ways to contain and manipulate a sustained fusion reaction. "It is the next critical step in the development of fusion energy," says the report.

As a partner in ITER, U.S. scientists have developed some of the components of the Cadarache facility and visited fusion facilities and other member countries. By 2016, according to the National Academies panel, the United States had contributed $1.13 billion to ITER, roughly 9 percent of its costs. It can be expected to contribute another $2.2 billion over the next decade.

By adding its own fusion program now and then using the additional science and engineering to develop a smaller, more economical fusion pilot plant, once the experience of running the ITER reactor has been studied, the National Academies estimates the United States would have to spend up to $200 million annually for several decades.

But the results would help the Department of Energy, which commissioned the National Academies study, to develop more U.S. experimental centers, which would attract more scientists and cooperation from electric utilities and others needed to help develop fully commercial fusion power plants.

The alternative of withdrawing from ITER could isolate U.S. scientists, while other countries move ahead with complex engineering and science innovations. That isolation could make fusion more costly for the United States, according to the panel.

Breakthroughs needed to overcome the challenges of fusion power could spawn advances in a "wide variety of fields in science and technology," including in the fields of optics, fluid mechanics and biophysics, the report says. The impacts could "touch every aspect of our lives," according to an earlier National Academies study.

San Diego-based General Atomics has been among the U.S. companies involved in one of ITER’s challenges, which is to manufacture a 1,000-ton superconducting electromagnet designed to initiate and control hot plasma for fusion energy. It is one of the most powerful magnets ever built. Each of its six modules projects the energy equivalent of 1,000 cars racing at 100 mph.

General Atomics noted in a press release that the power in its big magnets will be needed to unleash and control the much greater power potential of "carbon free" fusion energy "without long term waste." A fusion power plant, it estimated, "could use only 5 kilograms [11 pounds] of hydrogen to generate the energy equivalent of 18,750 tons of coal, 56,000 barrels of oil or 755 acres of solar panels."