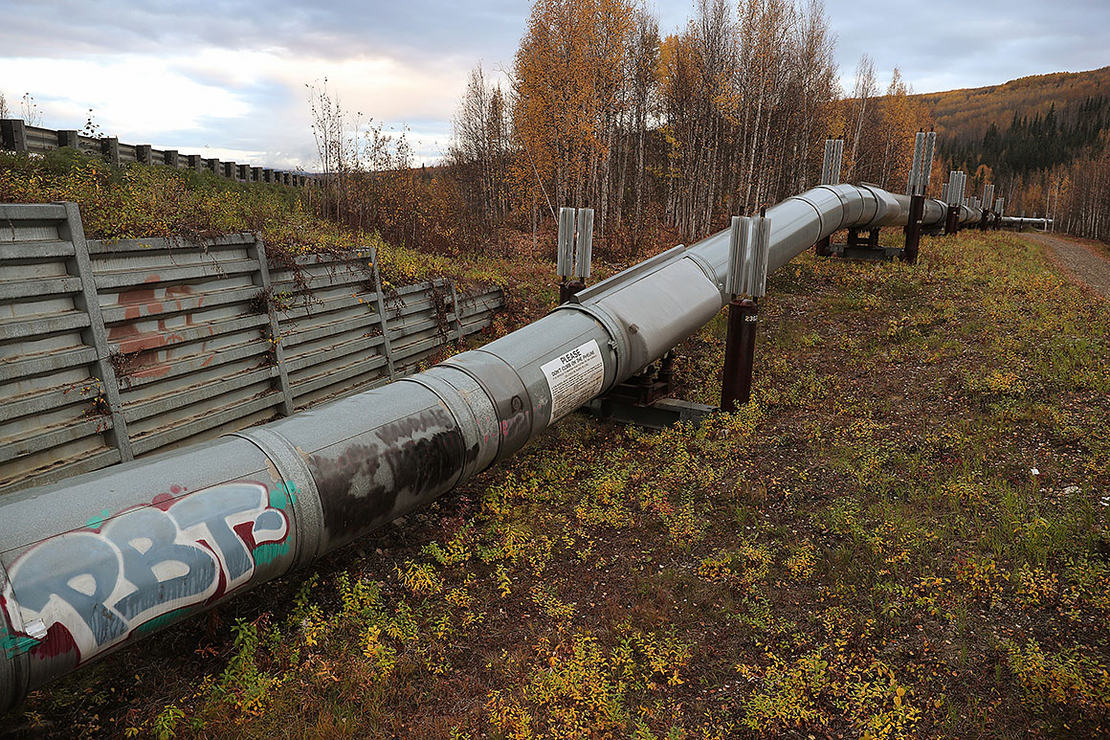 A part of the Trans Alaska Pipeline System is seen in 2019 in Fairbanks, Alaska. The 800-mile-long pipeline system carries oil from Prudhoe Bay to Valdez. Joe Raedle/Getty Images

Thawing permafrost is compromising part of the Trans-Alaska Pipeline System, which connects crude oil drilled in the Arctic to tankers in the Port of Valdez, highlighting how a warming climate is reshaping the oil industry in Alaska.

While there is no immediate threat of an oil spill, Alyeska Pipeline Service Co., the pipeline operator for TAPS, discovered buckling supports that hold the pipe above ground.

Alyeska, a consortium of oil and gas companies, will install underground coolers as a solution “to protect the integrity of TAPS from permafrost degradation” in addition to replacing the supports, according to an update from the Alaska Department of Natural Resources this winter. The finding was first reported by Inside Climate News.

State regulators approved driving 100 hundred pipes 50 to 60 feet deep. They will be equipped with passive cooling systems to draw heat away from the ground, according to the state.

Alyeska will also use wood chips and other measures as insulation on the surface.

“TAPS was designed and built to manage changing environmental conditions, including permafrost zones,” Michelle Egan, a spokesperson for TAPS, said in an email, noting that cooling systems to stabilize the permafrost are not new for the pipeline.

“Alyeska has operated TAPS for more than 44 years with commitment and respect for its dynamic environment. As part of that commitment, thermal units and the VSMs are regularly monitored and when needed, Alyeska repairs or reinforces them,” she said.

Bill Caram, executive director of the Pipeline Safety Trust, said the pipeline does not appear to be in immediate danger of a severe failure, such as a collapse that could lead to an oil spill.

But he said this finding, and the necessary remediation, could be a “harbinger” of things to come as temperatures rise.

“The pipeline was designed to handle the dynamic nature of permafrost, but not in a rapid climate change environment,” he said.

The Arctic is warming at a rate up to three times the global average, according to NOAA’s annual Arctic report card. As warm temperatures thaw the permafrost — the deep layer of soil, rock and moisture that remains frozen year all year in the far north — it leads to increasing challenges for both Arctic communities and the oil and gas industry.

Oil and gas development is central to the Alaska economy, with the historic heart of the industry at Prudhoe Bay along the Arctic coast.

Those oil fields are connected to the Lower 48 states and rest of the world via TAPS, the 800-mile feat of engineering that crests three mountain ranges in its route from Prudhoe to the Port of Valdez. The pipeline, which often runs aboveground to keep the hot crude oil from thawing the permafrost, started operating in 1977 to serve the mammoth North Slope oil discoveries that have sustained Alaska’s economy ever since.

But the flow of crude through the pipeline has faltered in recent decades after reaching a 1988 high. To offset that decline, Alaska has pressed for drilling on federal lands currently protected from oil production, like the Arctic National Wildlife Refuge.

The Republican-led Congress opened ANWR to potential development in 2017, with support from the Trump administration. The administration held the first lease sale for drilling rights in the refuge in January.

But the outlook for ANWR oil is uncertain. The Biden administration suspended those leases last month pending a review of the environmental work undergirding the ANWR oil program.

In ANWR, and elsewhere in the Arctic, conservationists warn of the higher risks of an oil spill in remote regions, pointing to the 2020 Norilsk spill in northern Russia.

The TAPS incident is not the first time that Alaska oil and gas operations have had to adjust to the permafrost thaw in northern Alaska. ConocoPhillips, which aims to expand drilling in the National Petroleum Reserve-Alaska, has said it will have to use chillers to keep the ground beneath its oil and gas infrastructure frozen.