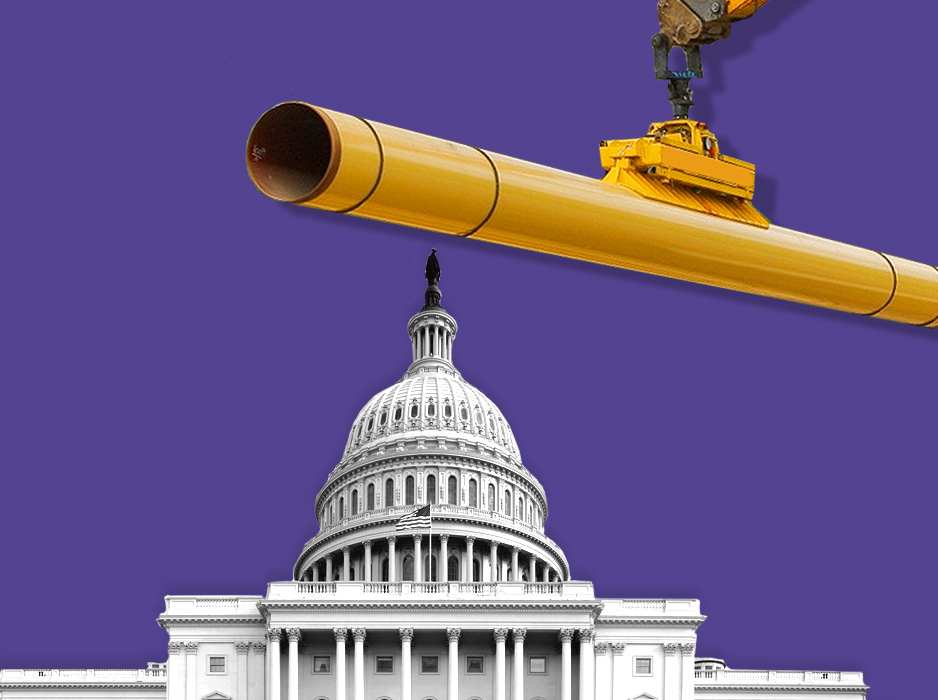 A proposal backed by the White House and Democratic leaders in Congress to speed up federal permitting is targeting an industry that many environmentalists dislike: pipelines.

But will the plan really do much to boost pipelines, and is the industry backing it?

For some companies, hope remains that permitting changes could be passed as part of a stopgap spending bill next month, as promised by Democratic leaders. But others are sticking to their talking points and expressing little enthusiasm as they wait for signs of whether the plan — which has not been formally introduced as legislation — gets the bipartisan support it would require. Some conservatives, meanwhile, are pushing back on the idea that the proposed permitting changes would work.

“The whole thing looks like what it is: a propaganda exercise driven by people who have never permitted a project and, therefore, don’t understand how the process actually works,” longtime GOP energy lobbyist Mike McKenna said.

Supporters of the deal have said that changes are needed to speed up energy projects. Manchin has called National Environmental Policy Act rules “burdensome,” saying in a statement this month that “that’s why I fought so hard to secure a commitment on bipartisan permitting reform, which is the only way we’re going to actually fix this problem.”

The proposal floated by Manchin includes well-known concepts such as two-year limits on environmental reviews under NEPA, revisions to Clean Water Act approvals and limits on judicial review. It also includes the creation of a new priority list of projects to include those for fossil fuels, nuclear energy, carbon capture and renewables (E&E Daily, Aug. 2).

Manchin and Schumer have said they’re committed to getting a permitting measure done during this fiscal year, which ends Sept. 30. But there are significant obstacles, including opposition from some progressive lawmakers.

Passage in the Senate would require 60 votes, and many Republicans are not committing to support the proposal, which they see as linked to the climate and energy provisions of the reconciliation bill that passed the Senate on a party line vote (Greenwire, Aug. 5). Lobbyists say congressional leaders have committed to a vote on the changes, not a commitment to round up votes.

“People are deeply skeptical,” said another lobbyist for an oil trade group.

Still, some observers see a path for passage, if not a specific legislative strategy.

Xan Fishman, the director of energy policy and carbon management at the Bipartisan Policy Center, pointed to recent “bipartisan wins” in the energy space, including the bipartisan infrastructure law and the Science Act.

“Historically, this has been somewhat more of a Republican issue, but … more and more Democrats have been talking about how to speed up clean energy infrastructure building and talking about permitting reform,” Fishman said.

Democrats have said the proposal will get a vote in September, and they have indicated that it could be included as part of a stopgap government funding measure, known as a continuing resolution. But numerous Senate Republicans have said they want a “clean CR” and will resist any efforts to add items to the basic measure to fund the government.

Robin Rorick, vice president of midstream policy at the American Petroleum Institute, said that with Manchin’s proposal, things seem to be “headed in the right direction.”

But “for every rumor we hear that it will get done, we hear a rumor that it won’t,” Rorick said in an interview. After the Inflation Reduction Act became law, the trade group said the package “fails to address permitting reform, which is essential to effectively delivering affordable, reliable energy to consumers in a growing economy.”

One company that is backing permitting changes is Mountain Valley Pipeline LLC, a joint venture of five energy companies.

The project is included in a list of energy permitting provisions Manchin’s office put out last month. It calls for the completion of the Mountain Valley pipeline project, a 303-mile natural gas conduit that’s designed to run from northwestern West Virginia to southern Virginia. The project was initially approved by federal regulators in October 2017 but has faced years of delays.

“We believe the proposed permitting reform legislation would address issues that have presented costly, time-consuming delays in the construction of energy infrastructure projects and supports Americans’ demands to execute a timely transition to clean energy, while at the same time ensuring energy reliability and affordability,” said Natalie Cox, a spokesperson for Mountain Valley, in an emailed statement.

Mountain Valley was not included in draft bill text reported by Bloomberg earlier this month, although Manchin’s office has called that legislative text “inaccurate and incomplete” (Greenwire, Aug. 4).

Although it has been pitched to environmentalists as a way to speed progress on renewable energy projects, many have been urging their allies to contact members of Congress to oppose the proposal floated by Manchin.

“We cannot let a side deal with literal coal barons reverse our course on climate and our future,” anti-pipeline crusader Jane Kleeb said in a message to supporters.

Some Democratic lawmakers also are pushing back on the plan. After passage of the Inflation Reduction Act, House Natural Resources Committee Chair Raúl Grijalva (D-Ariz.) said “environmental justice communities know all too well that permitting reform is nothing more than industry code for the systematic gutting of our most foundational environmental and public health protections. Polluting industries may have won that promise in a deal with a select few, but I intend to do everything in my power to convince the rest of my colleagues to break it.”

For their part, many pipeline companies say changes are badly needed, even as they are declining to back Manchin’s specific proposal at this stage.

John Stoody, vice president of government and public relations at the trade group that recently changed its name from the Association of Oil Pipe Lines to the Liquid Energy Pipeline Association, said it’s too easy for the opponents of projects to manipulate the permitting process.

“We understand how some groups demand more time, more analysis or more reviews simply as a delaying tactic in hopes of killing a project they don’t like,” Stoody said.

The Interstate Natural Gas Association of America said in a statement that it is supportive of permitting legislation broadly, adding “we have not yet seen legislative text, but based on the outline, this proposal expedites and streamlines the permitting process.”

Pipeline giant Enbridge Inc. said that it was hopeful permitting legislation would yield bipartisan support and “better align investment signals in the Inflation Reduction Act with a permitting process that allows for necessary energy infrastructure to advance in a timely, inclusive and predictable manner.”

But McKenna, the Republican energy lobbyist, questioned whether the ideas Manchin laid out can really speed up projects. The list from Manchin’s office proposed maximum timelines for permitting reviews, “including two years for NEPA reviews for major projects and one year for lower-impact projects.”

He said it’s easy for agencies to sidestep permitting deadlines. By focusing on NEPA, it misses the real problem, according to McKenna.

To really get at the issue, he said, Congress would have to fix problems in the major environmental laws such as the Clean Water Act or the Endangered Species Act.

“It is not really ‘permitting reform’ like any person who has ever tried to get a project does understands permitting reform,” he said. “It is doing some landscaping on NEPA.”

But Suzanne Mattei, lawyer and energy policy analyst at the Institute for Energy Economics and Financial Analysis — whose mission is to “accelerate the transition to a diverse, sustainable and profitable energy economy” — called the Manchin proposal a solution in search of a problem. She said the federal government prevails in about 80 percent of NEPA cases.

“I think the process does what it’s supposed to do,” Mattei said. “Generally, when a project gets held up, it’s because it’s a bad project.”