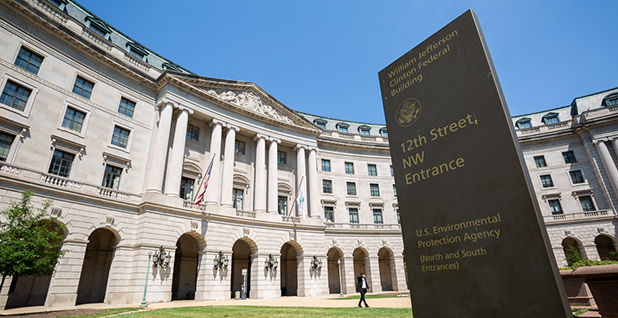 Under the subject line "Update on an important matter," EPA Administrator Andrew Wheeler said in an internal email obtained by E&E News that the culprit responsible for "offensive notes or inappropriate messages left in EPA common areas" was a contractor.

"We took many measures over the past number of months to find the person responsible for writing these messages. I am updating you to say we have found the person, a contractor, and held them accountable," Wheeler told employees in the email sent yesterday afternoon.

EPA press officials didn’t respond to questions from E&E News for this story, including how the contractor was held accountable by the agency.

Wheeler thanked EPA employees, including those at the Office of Mission Support, for addressing the matter, and he encouraged any staff members who see "offensive language or actions" to report it. In addition, he said EPA’s career and political leadership will continue to take steps to ensure the agency has a safe work environment.

The racist messages were also referred to EPA’s internal watchdog for review. Wheeler said in an email last November that the matter had been referred to EPA’s Office of Inspector General "and an active investigation is underway."

EPA OIG spokesman Jeff Lagda said, "It is the policy of the OIG to neither confirm nor deny the existence of an investigation." He referred further questions about Wheeler’s email yesterday to EPA’s public affairs office.

Stephanie Doolan, chairwoman of a coalition of EPA’s five unions, said staff members were afraid after the racist messages were found.

"Employees particularly in that office in Headquarters were fearful. I’m not sure that they feel safe, but much better knowing that s/he has been found and disciplined," Doolan said in an email, adding, "I feel better knowing that there is justice, at least in this matter. The issue has caused us to have conversations and take actions that have been needed for a while."

"Some employees have expressed their doubts about this. Others were wondering whether this contractor was responsible for all incidents or only for one incident? I think the Administrator should have shared more details in his email," Al-Mudallal said in an email.

Wheeler attended listening sessions with staff, including one that included representatives of labor groups in March, where the racist messages were discussed. Union officials still pushed for a stronger response from the agency (Greenwire, May 17).

In a letter last April, the EPA union coalition had also requested a meeting with Wheeler to discuss the incidents. Doolan said that meeting has not happened but the coalition was invited to take part in EPA’s diversity and inclusion advisory group.

"We felt that even if the Administrator failed to directly acknowledge our good ideas on these issues that are [very] important to the employees we represent, he didn’t prevent or limit our voices in the development of the policies and actions that matter to us," Doolan said.