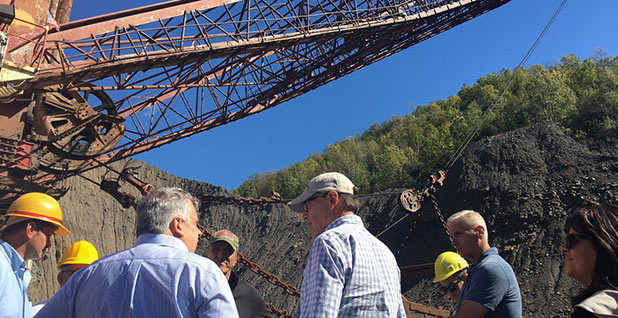 Energy Secretary Rick Perry’s directive to the Federal Energy Regulatory Commission on Friday contains no evidence of immediate dangers to the nation’s high-voltage grid from the retirements of marginal coal and nuclear plants, according to a phalanx of energy industry opponents.

Perry also fails to win support from exhibit A in his FERC action — a non-public report by the nation’s grid monitor, the North American Electric Reliability Corp., called "Synopsis of NERC Reliability Assessments."

The Department of Energy’s notice of proposed rulemaking, which it titles the "Grid Resiliency Pricing Rule," includes the subtitle "NERC Warns That Premature Retirements of Fuel-Secure Generation Threaten the Reliability and Resiliency of the Bulk Power System." It then goes on to characterize the NERC report, which NERC and DOE both refused to make public.

The NERC report, later obtained by E&E News, summarizes assessments NERC has repeatedly made about issues caused by the decline of coal-fired generation in the United States and the shift toward more gas-fired power and renewable energy. NERC sent it to Perry on May 9. However, it makes no claim of a grid in crisis.

Gas, renewable power and electricity storage are technically able to provide these services, NERC found, but added that they can’t be taken for granted. The needs for new stability equipment, new market rules and stronger assurances around natural gas supplies to generators all must be addressed.

However, the North American grid is not facing a crisis with reliability services now, according to the non-public NERC report, a number of public NERC documents and outside experts. To some of Perry’s critics, his action looks less like a balanced assessment of grid issues and more like a political move to throw to hard-pressed nuclear and coal companies the support President Trump promised during his campaign for the White House.

NERC CEO Gerry Cauley testified before FERC in June that "the state of reliability in North America remains strong, and the trend line shows continuing improvement year over year."

"The mainland grid is clearly reliable today, and fairly resilient — whatever resilient means — and it is clearly not in an emergency yet," said Alison Silverstein, a consultant who led a DOE team that reviewed reliability issues for Perry.

FERC yesterday set a public comment deadline for the proposed rule for Oct. 23.

A broad group of energy companies, from oil to wind, weighed in yesterday in a joint filing urging FERC to reject Perry’s push for fast action on his proposed rule.

"To the extent the [Perry] letter implies that an emergency exists to justify the proposed interim final rule (although it provides no justification for this action whatsoever), publicly available information [from DOE and NERC], as well as other experts, all demonstrate that no emergency exists that would justify such an action," the filing stated.

These opponents outnumbered support for Perry’s warning that came earlier this month from the IHS Markit consulting firm’s report, which was funded by the Edison Electric Institute; the Nuclear Energy Institute; and the Global Energy Institute at the U.S. Chamber of Commerce. Citing the same NERC synopsis that Perry quoted, IHS said coal and nuclear retirements are "moving the United States toward a less cost-efficient, less resilient, and less reliable power generation mix."

"In light of these threats to grid reliability and resilience, it is the commission’s immediate responsibility to take action to ensure that the reliability and resiliency attributes of generation with on-site fuel supplies are fully valued and in particular to exercise its authority to develop new market rules that will achieve this urgent objective," Perry wrote.

Under his plan, coal and nuclear operators would receive market payments that "value" their on-site fuel supplies as insurance against extreme storms, natural disasters or attacks that disrupt pipeline supplies. Absent from Perry’s proposal was any mention of the public value of carbon-free and less-polluting electricity supplied by renewable resources and nuclear power.

Perry on Friday directed FERC, an independent commission, to act on his proposal within 60 days, or do it immediately, with opportunities for revision later.

NERC’s report summarizing its views speaks instead of carefully managing the transition to different kinds of power generation rather than rescuing coal and nuclear generation at once.

Another reliability assessment from NERC advisers, published in November, also recommended a considered pace. NERC should "assess the risks," "gather data and insights," provide technical assessments on reliability and "further develop lessons learned," according to the November report.

NERC advisers stressed concerns over the increasing role of natural gas generation as a foundational power source for the power network, a key argument from Perry. A long-standing worry concerns merchant power generators’ reliance on non-guaranteed delivery contracts for the just-in-time fuel that their units must receive over long pipeline networks.

If extremely cold weather or a future cyberattack were to take several pipelines offline, many of these gas generators would be at the end of the pipeline queue, competing with gas heating utilities for scarce supplies, and could well lose out.

The comment frames the issue of whether it is better to get at solving these problems or to subsidize at-risk coal and nuclear plants.

Perry’s proposal is directed at generators in competitive power markets. The PJM Interconnection, the largest of these markets, issued a statement yesterday saying that it hasn’t stopped working on tough grid challenges.

"For two decades, PJM Interconnection’s competitive wholesale markets have achieved the objective of ensuring reliable power supplies at the lowest reasonable cost," it said. "The markets have a successful track record of paying for performance so that consumers benefit from the most effective and efficient resources."

It said it plans to stay on that path.