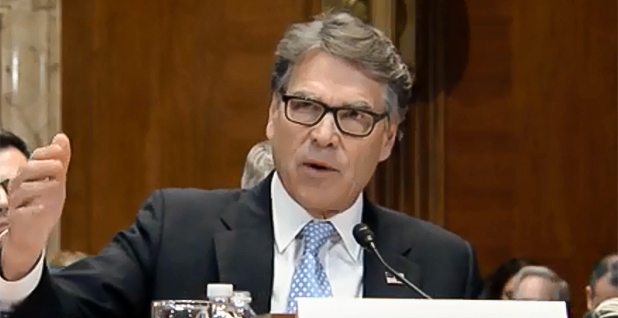 "It’s a step in the right direction," Perry said in response to a question from Sen. Tom Udall (D-N.M.) on whether he supports Alexander’s action plan. "Obviously without seeing all the crossed t’s and dotted i’s, I, generally speaking, don’t mind going down the road with Lamar Alexander."

Earlier this week, Alexander, the chairman of the Energy-Water spending subcommittee, took to the Senate floor to outline his vision of a five-year action plan to address 10 areas of clean energy that are needed to better unleash an energy technology future that aligns with the need for reduced greenhouse gas emissions (E&E Daily, March 26).

The effort earned praise from Democrats on the committee, like Udall, who saw the outline as a serious Republican approach to climate change that was lacking throughout the Green New Deal debate.

Including support for better battery storage, carbon capture and advanced nuclear, Alexander’s proposal set forth one tangible approach to the Republican mantra of innovation as the solution to climate change.

"As we review the Department of Energy’s fiscal year 2020 budget request today and work on drafting the Energy and Water Development Appropriations bill, I will be keeping these 10 grand challenges in mind," Alexander said during yesterday’s hearing.

Perry’s support comes despite a Trump administration fiscal 2020 request that would slash research and development in those areas by billions of dollars.

The proposal would reduce spending in the Office of Science by $1.1 billion and the Office of Energy Efficiency & Renewable Energy by $2 billion compared with their fiscal 2019 enacted numbers.

"The administration’s proposed cuts in basic and applied research and development essentially, to me, abandoned any progress on fighting climate change, so I hope we can reconsider that," said Sen. Dianne Feinstein (D-Calif.), the ranking member of the subcommittee.

In a question about proposed EERE cuts, Perry said in defense that dollar amounts do not reflect the results prioritized by the Trump administration, pointing to the proposed budget’s increased focus on battery storage.

But Perry reassured lawmakers that he would implement what Congress approves. "I recognize how this process works," Perry said. "There may be some areas we don’t necessarily agree on."

"I’m a really good manager, and whatever this committee decides on and the funding that you send to the agency, we will do it in the most efficient, effective way that we can and follow your directions," Perry added.