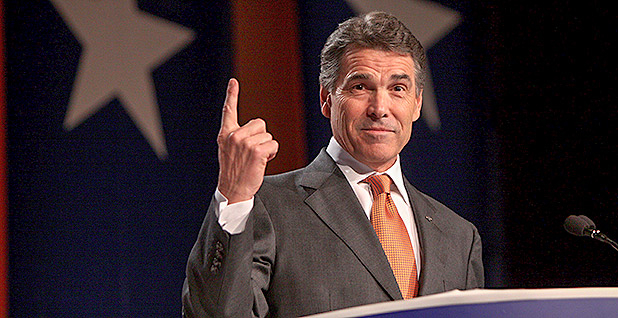 According to the Pravda Report, Russian pranksters Vladimir "Vovan" Kuznetsov and Alexei "Lexus" Stolyarov conducted the interview, which included discussion of a new biofuel made from a mixture of home-brewed alcohol and manure.

Perry hosted Ukrainian officials last month, and DOE received a request for a follow-up phone call on July 12 from pranksters who purported to be Ukraine’s prime minister. The prank phone call occurred on July 19 with pranksters who have also made phony calls to Turkish President Recep Tayyip Erdogan, the prime minister of Croatia, the secretary general of NATO and a number of Democratic and Republican lawmakers, as well as the singer Elton John.

During the 20-minute call last week that was published online, a woman is heard purportedly putting Perry through to Volodymyr Groysman, the prime minister of Ukraine.

During the call, Perry also said the United States is opposed to Nord Stream 2, a pipeline carrying Russian gas across the Baltic Sea, and said the Trump administration is "broadly" supportive of sanctions against Russia.

Perry also welcomed a broader discussion on development of civil nuclear power and defended President Trump’s decision to withdraw from the Paris climate agreement, calling for a focus on the United States’ record on the "global environment."

"I hope that stepping away from the Paris accord will not have any negative impact with our relationship with the Ukraine," Perry said. "We tried to divorce the politics from this and really just let our record stand, one that I’m very proud of."

Perry also discussed cyberthreats, saying there are "many groups," including some state-sponsored entities and criminal elements, trying to penetrate the U.S. grid. Perry said he wouldn’t be surprised if Russian actors were behind such activities, adding that the United States is constantly monitoring its system. He also called for sharing technologies and safeguards to avoid grid threats that Ukraine’s system has recently faced.

Perry said he wanted to put a united front on the U.S.-Ukraine relationship, pointing to a particular coal shipment, and offered an administration-level contact to help streamline Ukraine’s geologic information tied to oil and gas development.

DOE in an email confirmed the call took place July 19. Perry hosted the president of Ukraine on June 20 at DOE’s headquarters in Washington, and a request came through on July 12 seeking a follow-up phone call about the meeting, according to DOE.

"Secretary Perry is the latest target of two Russian pranksters. These individuals are known for pranking high level officials and celebrities, particularly those who are supportive of an agenda that is not in line with their governments," said Shaylyn Hynes, a spokeswoman for the secretary. "In this case, the energy security of Ukraine."