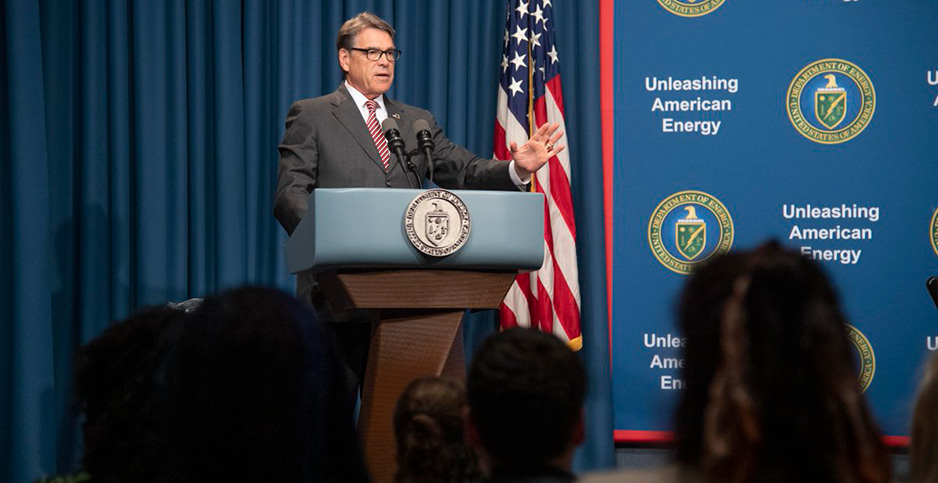 Energy Secretary Rick Perry did not comply with a subpoena related to the House Democrats' impeachment inquiry. @SecretaryPerry/Twitter

Rick Perry’s refusal to comply with a congressional subpoena is escalating tensions between House Democrats and President Trump’s outgoing Energy secretary over his role in the Ukrainian controversy that has sparked an impeachment probe.

After days of declining to address whether he would comply with House Democrats’ subpoena for Ukraine-related documents, the Energy Department late Friday informed the three committee chairs conducting the investigation inquiry that it would not turn over the requested information.

In doing so, DOE Assistant Secretary for Congressional and Intergovernmental Affairs Melissa Burnison echoed the chief complaint of the Trump administration, which has said it will not comply with the inquiry because it was not authorized by a vote of the full House.

"The department reiterates the White House Counsel’s concern that blurring the distinction between Congress’s legislative and impeachment powers violates separation of powers."

House Democratic leaders last week considered holding a vote to authorize an impeachment inquiry, although they maintain that such a move is not required, but decided to hold off on doing so. The White House earlier this month declined to say whether it would cooperate with the House if such a vote were held.

But in her letter, Burnison signaled the department would continue to resist producing the sought information about Perry’s dealings with Ukraine, arguing that the documents are confidential and protected by executive privilege.

‘No idea what he’s caught up in’

House Democrats made clear Friday that efforts to obtain information regarding Perry’s role in the Ukraine affair would continue, even after the former Texas governor confirmed reports that he will leave the Trump administration by the end of the year.

Speaking before DOE’s response to the House, Energy and Water Appropriations Subcommittee Chairwoman Marcy Kaptur (D-Ohio) said she was troubled by the involvement of Perry, whom she otherwise praised as knowledgeable and a "very easy secretary of Energy to work with."

"In terms of Ukraine, anytime he was scheduled to travel there, he made a special effort to call me and tell me," said Kaptur, who also co-chairs the Congressional Ukraine Caucus. However, she noted that Perry did not debrief her upon his return from the nation, once part of the former Soviet Union.

Perry, Kaptur added, traveled to Ukraine "extensively" compared with other Energy secretaries and was involved in "many agreements" related to energy production there.

"He would be quite knowledgeable about activities in Ukraine," she said. "To what extent he may or may not have been involved with Paul Manafort’s empire, I don’t know," she said, referencing Trump’s former campaign manager, now imprisoned after being convicted of tax and bank fraud last year.

Kaptur offered cautious praise for Perry but said the seriousness of the allegations — that Trump withheld military aid to Ukraine as part of efforts to pressure that nation’s government to open investigations of alleged corruption into former Vice President Joe Biden and his son Hunter — requires scrutiny of all involved.

"I believe Secretary Perry to be a patriot," she said. "I have no idea what he’s caught up in, if he is caught up in anything. … I think that we need to know everything about any Trump official, especially at that level, that travel to Ukraine or adjacent countries."

Kaptur said she was "stunned" at the timing of Perry’s announcement that he would leave the administration, which came just one day before Friday’s subpoena deadline. She said she has not spoken with Perry recently, but on Friday said she had recommended to Schiff that he seek his testimony before his committee.

"I think he needs to provide the information as soon as possible," she said, noting that Perry could continue to play a role in negotiating final spending levels for his department for fiscal 2020, even as he is in defiance of a congressional subpoena.

Rep. Gerry Connolly (D-Va.), who is a senior member of two of the committees that subpoenaed Perry — Oversight and Reform and Foreign Affairs — said Perry’s impending departure could help Democrats obtain the information they are seeking, despite the administration’s efforts to limit cooperation with the impeachment probe.

"I would hope it would help focus his attention on cooperation," Connolly told reporters Friday, "because now that you know that you’ll be a former Cabinet official, you’re totally at risk once you become a private citizen. And given the fact that others still on the payroll have cooperated, you can cite that to protect yourself. But I think it’s the height of folly to ignore it."

Speaking before DOE’s letter to Congress, Connolly said Perry won’t be able to "hide behind" White House claims of executive privilege, even after he steps down.

"Executive privilege is legally dubious to begin with, but once you’re a former member of the federal government, it’s even more dubious," he said.

Republicans have largely railed against what they call procedural deficiencies of House Democrats’ impeachment investigation, which they say lacks basic due process and fairness.

Illinois Rep. John Shimkus, the top Republican on the Energy and Commerce Subcommittee on Environment and Climate Change, echoed Republican complaints about process and transparency in the impeachment inquiry when asked about Perry on Friday.

But while he remains a Perry supporter, Shimkus did say he was concerned with some of the people connected to Trump’s Ukraine policy, including the president’s lawyer, Rudy Giuliani.

"My biggest concern is that Ukraine is being pulled into our internal political processes," Shimkus said.

"I can understand the reticence if you’re not getting a fair, free hand to begin with, if there’s a perception of no impartiality," Shimkus said. "So I’m not concerned with his delay, let me put it that way."