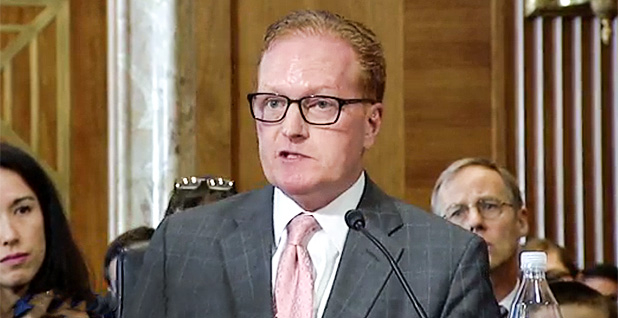 Energy Secretary Rick Perry late Friday said federal regulators can have an additional 30 days to reply to his request for power market reforms that would boost coal and nuclear plants.

In a letter to Kevin McIntyre, the new chairman of the Federal Energy Regulatory Commission, Perry set a deadline for FERC of Jan. 10. In doing so, Perry didn’t hide his disappointment.

The secretary reiterated that "urgent action is required" to reform federal rules governing the transmission of electricity across large swaths of the Midwest and East. "I urge the Commission to act expeditiously," Perry wrote.

Perry had directed FERC to consider compensating coal and nuclear power plants operating in regional markets by providing a guaranteed cost-recovery mechanism. The Energy secretary argues that because those big, centralized plants stockpile coal and nuclear fuel, they improve the electric grid’s resilience during natural disasters or emergencies.

During the next 30 days, Perry said he would examine all of his legal options for taking "remedial action as necessary to ensure the security of the nation’s electric grid."

McIntyre last week, on his first day in the job, wasted no time asserting his authority as chairman of an independent agency when he said FERC needed another month to consider the issues around Perry’s grid proposal.

Perry had asked in September that FERC act on his suggested notice of proposed rulemaking by today, and McIntyre’s predecessor, Neil Chatterjee, had pledged that FERC would do so. But just hours after taking his oath of office on Thursday, McIntyre wrote to Perry, noting that the secretary can amend his original deadline for action.

The commission has received more than 1,500 comments on Perry’s suggested rulemaking that would compensate certain coal and nuclear plants, McIntyre wrote, adding that two new members — McIntyre and Richard Glick — had also just taken their seats and needed time to catch up.

Glick, the former general counsel to Democrats on the Senate Energy and Natural Resources Committee, was sworn in Nov. 29 to a term ending in June 2022.

Chatterjee had been pushing for the commission to take an "interim" step that would result in immediate cash payments to owners of certain coal and nuclear plants. That option appears unlikely now that two other commissioners, Democrat Cheryl LaFleur and Republican Robert Powelson, are reportedly collaborating on an alternative to Perry’s proposals.

According to press reports, they want FERC to issue a "notice of inquiry" to national grid operators, directing them to respond within 90 days to a series of questions on the resilience of their systems. There would be no promise of cash payment to financially challenged plants.

"Were FERC to reject the idea of propping up coal and nuclear plants and instead order an inquiry into resilience that proceeded along these lines, that would be a great outcome," said Miles Farmer, clean energy attorney with the Natural Resources Defense Council.

"That outcome is far, far better than anything that directs payments to coal and nuclear plants or resembles the sort of proposal that DOE put forth," he said.

Robert Murray, the CEO of coal producer Murray Energy Corp. and a top GOP donor, has pitched the idea of "interim relief" or an "interim solution" along the lines of Chatterjee’s stated goal. One of Murray’s largest customers, the utility FirstEnergy Corp. based in Ohio, has said it might sell off some of its fleet if the federal government doesn’t provide direct relief for coal plants. In an era of flat electricity demand, coal-fired generation has struggled to compete in regional power markets with lower-cost natural gas and wind power.

Murray has said a bankruptcy by FirstEnergy’s merchant generation unit would not endanger his company because of an anticipated increase in coal exports. Still, a spokesman for Murray urged FERC to act swiftly on Perry’s effort to shore up the coal industry. "We believe that the sooner this rule is implemented, the better it will be for the American people," Murray spokesman Gary Broadbent said in a statement.

Devin Hartman, electricity policy manager at the R Street Institute, a free-market think tank, said FERC faces significant political pressure from Capitol Hill and the White House. But even that pressure might not lead FERC to find that its current rules and market tariffs fail to account for electric reliability and resilience.

But getting more information and data on the record through a notice of inquiry, Hartman said, would be a good idea.

"It would be a better outcome than what Perry is asking for," said Justin Gundlach, staff attorney with Columbia Law School’s Sabin Center for Climate Change Law.

Gundlach faulted Perry for trying to "shoehorn subsidies into the term ‘resilience’ on the weird premise that a pile of coal is resilient."

The attribute of on-site fuel "is not going to conveniently justify a narrowly targeted subsidy" to plant owners, he said.

Former Republican FERC Commissioner Nora Brownell applauded McIntyre for seeking the delay to "take a thoughtful look at the broader range of issues" about "what the grid of the future needs to look like."

She was skeptical about Perry’s musings that he might have the ability to act unilaterally if FERC doesn’t respond as he wants.

"I’m not sure what authority he would purport to use. But if he wants to say, ‘I’m going to tax ratepayers $10 billion or $20 billion to do some favors for my friends,’ then he can own that," Brownell said. "I think the courts might look at it differently."

Brownell shares the widely held view of most electric utility industry veterans that generation is only one component of the complexities of ensuring grid reliability and the ability to bounce back from a disaster.

She noted that in the comments filed with FERC on the DOE rule proposal, "there was pretty consistent commentary that [fuel supply] is not the answer."

Transmission is just as critical, if not more so, because a modern grid can "redeploy generation resources around a crisis," she said.

Just last week, the board of the Midcontinent Independent System Operator approved $2.6 billion in transmission projects intended to "ensure the continuing reliability of the regional grid, interconnect new generation supplies, provide for increased market efficiency, and reduce congestion between MISO and neighboring regions."

MISO operates the grid in 15 U.S. states and the Canadian province of Manitoba.

The 353 projects are part of MISO’s Transmission Expansion Planning aimed at improving energy access and reliability in Illinois, Indiana, Michigan and Ohio. Five of the projects are interregional projects in partnership with grid operator PJM Interconnection’s board of directors.

"Maintaining the reliability of the grid involves continuously reviewing the system and moving ahead with transmission projects," said PJM President and CEO Andrew Ott. "Today, the board has authorized a number of smaller projects, each of which is important to maintaining reliability and efficiency for people who depend on both PJM and our members."

PJM provides power to 65 million people across 13 states and the District of Columbia.

At the time, PJM also approved the so-called installed reserve margin (IRM) for each of the next four years. The IRM is an additional amount of capacity above the forecast peak demand for a year. Having the additional capacity ensures that sufficient resources are available to maintain power supplies if some resources are unavailable or demand for electricity is higher than expected.

The percentages represent thousands of megawatts of generation beyond what is normally needed. Much of that is coal-fired and nuclear capacity.