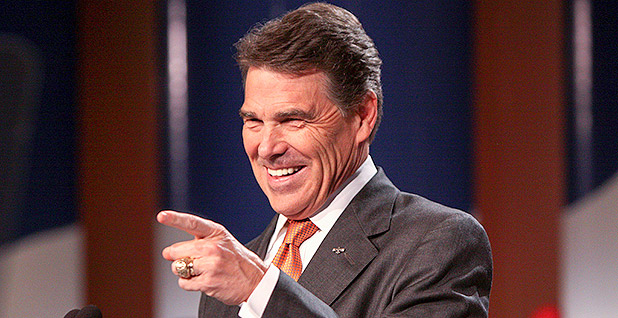 Former Texas Gov. Rick Perry (R) has had a change of heart about wanting to dismantle the Department of Energy — the agency he’s been tapped to lead — and his assertion that climate change isn’t real.

In remarks prepared for his confirmation hearing to lead DOE before the Senate Energy and Natural Resources Committee today, Perry said that climate change, which he once called a "contrived phony mess," is occurring and that humans are at least partially to blame.

Perry, who would replace nuclear physicist and former professor Ernest Moniz, also walked back his past calls to scrap DOE, a vast agency that oversees the nation’s laboratories and nuclear weapons complex — even expressing regret for attacking the agency.

The former governor and presidential hopeful also appeared in his comments to confirm that he has faced a steep learning curve in recent weeks digesting all the details about DOE’s complex but vital role.

While Perry’s critics have questioned his qualifications for overseeing such a complex department, his proponents point to the former governor’s experience in transmission policy and his support for a low-level nuclear waste site in the Lone Star State operated by Waste Control Specialists. Perry has past political ties to WCS, which is now in the running to temporarily store nuclear waste meant for the stalled Yucca Mountain nuclear waste repository in Nevada.

In his prepared remarks, Perry, 66, went on to tout Texas’ improving "climate and air quality" and the state’s leadership in wind energy, as well as oil and gas, despite booming population growth and massive petrochemical refining industries. He cited a 17 percent dip in carbon emissions, a 56 percent dip in sulfur dioxide and 66 percent nitrous oxide, as well as the decommissioning of 137 older, dirtier power plants.

"When it comes to climate change," Perry said, "I am committed to making decisions based on sound science and that also take into account the economic impact."

Perry’s comments may soothe some Democrats who have been poking fun at him for forgetting the name of the agency he wanted to dismantle during a 2011 Republican presidential primary debate.

The agency he vowed to dismantle is the one President-elect Donald Trump asked him to lead: DOE.

"It’s a problem for me," Durbin said in an interview yesterday. He added that Perry’s nomination makes "no sense."

While Durbin doesn’t sit on the Energy and Natural Resources panel, his skepticism points to a hurdle Perry would face if his nomination reaches the Senate floor.

Perry is likely to get there, given the committee membership: 12 Republicans and 10 Democrats, including one Democrat, West Virginia Sen. Joe Manchin, who is in Perry’s corner.

Perry is ready for the jokes. Manchin told reporters Perry is preparing to call for deep reforms at DOE and is ready to step away from his call to scrap the department (E&E News PM, Jan. 18).

And Democrats are ready with jokes.

Durbin said that as recently as last week there had been almost no contact between Perry and his transition team and current DOE leaders. The Democrat joked it was a "radical idea" to call current leaders of DOE for advice.

"Maybe he abolished the phone number when he said he would abolish the agency," Durbin said.

While Perry is expected to cruise through the energy panel, Democratic support is far from assured.

In one camp, Manchin, a former governor who has known Perry for years, is fully supportive and slated to present the Texan to the committee this morning.

But Sen. Ron Wyden (D-Ore.) said in an interview there is a "rich irony" in Perry’s nomination. A senior member of the energy panel, Wyden said he met with Perry this week and is planning on follow-up questions about his plans for DOE at the hearing.

Another Senate Energy and Natural Resources Democrat, Sen. Debbie Stabenow of Michigan, said there have been "very few" nominees selected to run an agency after calling for killing it.

She called a meeting with Perry earlier this month a "good conversation" but said she has yet to decide whether she would vote to confirm him.