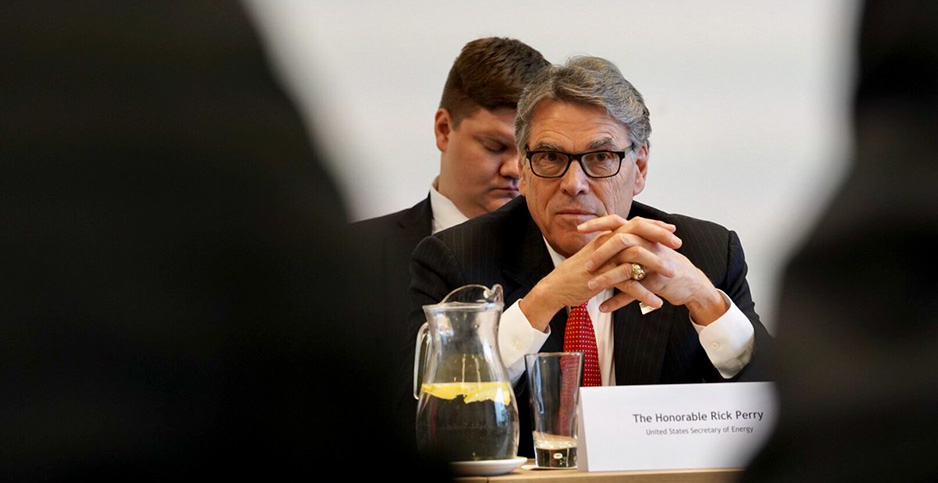 Questions surrounding Energy Secretary Rick Perry are not preventing him from engaging European leaders this week to promote U.S. energy cooperation. He’s also denying reports of his departure from the administration.

The secretary took the trip as he gets pulled deeper into the impeachment inquiry concerning President Trump’s alleged pressure on Ukraine to investigate his political opponents.

Perry and his aides have long denied any wrongdoing and have pledged cooperation in the inquiry.

During remarks today, Perry also pushed back on reports he pressured Ukraine’s state-owned natural gas company Naftogaz to change its oversight board, including getting rid of Amos Hochstein, who served President Obama’s State Department.

Additionally, Perry today denied reports from last week he would announce his resignation as soon as next month.

"No. I’m here, I’m serving," he said, according to Reuters. "They’ve been writing the story for at least nine months now. One of these days they will probably get it right, but it’s not today, it’s not tomorrow, it’s not next month."

Over the weekend, Perry was part of the broad document subpoena push from House Democrats, which are leading the impeachment probe against Trump (Energywire, Oct. 7).

DOE was mentioned in more document requests today to the Department of Defense and the Office of Management and Budget.

The effort is part of the broader, increased role of DOE in promoting natural gas use in Eastern Europe as a diplomatic tool to undercut energy dependence on Russia.

"Enhancing interconnectors could mean that one day Ukraine can supply its neighbors with new domestic production," he said.

The Lithuania stop featured the launch yesterday of the Inaugural U.S.-Baltic High-Level Ministerial Dialogue on Energy meeting, which included discussions of "regional energy cooperation in nuclear, renewables and fossil fuels," the secretary said in a tweet.

Perry’s tour will also feature a visit to Latvia, where he is scheduled to give a keynote address tomorrow on "energy security through energy diversity" at the Eurogas Central and Eastern Europe Conference, DOE said last week.

On Thursday, he will wrap up this European visit with an appearance at the Arctic Circle Assembly in Iceland.