Perry ‘needs to set the record clear’ on Ukraine 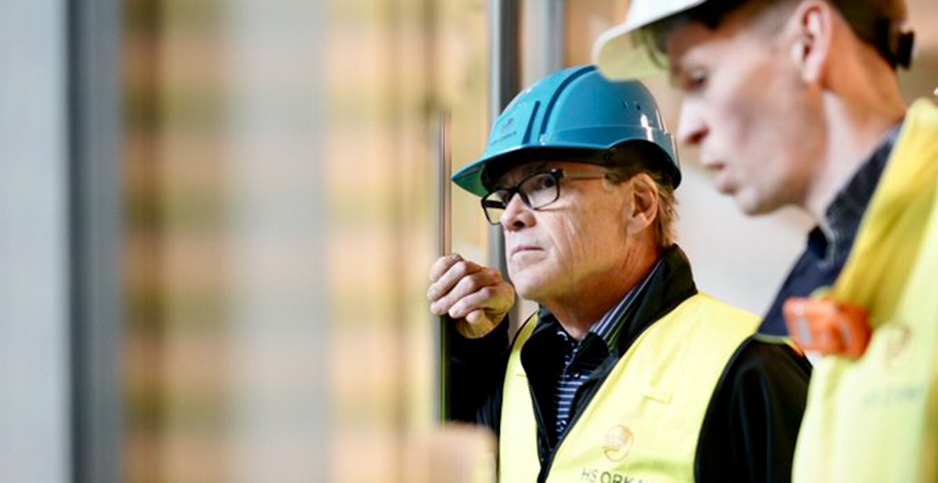 Energy Secretary Rick Perry’s relatively chummy relationship with lawmakers from both parties faces a day of reckoning tomorrow, when the former Texas governor is supposed to turn over information sought by House Democrats as part of the impeachment inquiry into President Trump.

Perry, who has served in Trump’s Cabinet since March 2017, has offered few clues as to whether he will respond to the subpoena issued earlier this month by House Democrats.

The Energy Department did not respond to a request for comment, but in an appearance on Fox News Business yesterday, Perry said a DOE attorney is reviewing the request.

"The House has sent a subpoena over for the records that we have," Perry said. "And our general counsel and the White House counsel are going through the process right now. And I’m going to follow the lead of the — of my counsel on that."

During an appearance on Capitol Hill on Tuesday, Perry declined to respond to reporters’ questions on whether he would comply with the request.

The White House, however, has barred administration officials from turning over requested information, arguing in part that the investigation is invalid because the House has not formally voted to authorize an impeachment inquiry.

While Perry has enjoyed a better relationship with Capitol Hill Democrats than other members of Trump’s Cabinet, many said this week he needs to answer questions about whatever role he played in Trump’s dealings with Ukraine.

The president is accused of withholding military aid in an attempt to pressure Zelenskiy to open investigations into former Vice President Joe Biden and his son Hunter.

Rep. Marcy Kaptur (D-Ohio), who as chairwoman of the House Energy and Water Development Appropriations Subcommittee oversees the Energy Department budget, said Perry typically called her to let her know when he would be traveling to the central European nation.

"I thought the guy’s got his geostrategic map straight, he’s paying attention to Ukraine. I thought he was actually accomplishing real things there for us on the energy front," said Kaptur, who also co-chairs the Ukraine caucus. "Now there’s this question mark, and I think he needs to set the record clear on his activities."

Kaptur said she was especially surprised by the recent closed-door testimony from George Kent, a senior State Department official, that Perry was one of the "three amigos" handling Ukraine policy at the behest of White House chief of staff Mick Mulvaney.

The others were U.S. Ambassador to the European Union Gordon Sondland and former Ukraine envoy Kurt Volker, both of whom have or soon will give depositions.

"Secretary Perry never mentioned that to me when he would call and tell us that he was going over there it was actually at Mr. Mulvaney’s urging," said Kaptur, adding that the DOE chief also never said he was traveling with other administration officials or if he had any contacts with Trump’s personal lawyer, Rudy Giuliani, on Ukraine.

Kaptur suggested travel records could be checked to see exactly when Perry traveled to Ukraine. She added that she has had a "very cordial" relationship with Perry but has not recently spoken to him.

Sen. Dianne Feinstein (D-Calif.), the Senate’s top Democratic Energy-Water appropriator, said the "will of the legislative branch should not be destroyed" and suggested Perry and others need to comply with the subpoenas.

West Virginia Sen. Joe Manchin, the top Democrat on the Energy and Natural Resources Committee and a longtime personal friend of Perry’s, said this week that he hadn’t spoken to the secretary recently and had "no idea" what to think about the Ukraine investigation.

However, he acknowledged that it was unclear what would happen if Perry ignores tomorrow’s deadline. "Enforcing noncompliance is a difficult position," Manchin added.

Sen. Debbie Stabenow (D-Mich.), a senior member on Energy, said it was unclear what effect it would have on DOE’s relationship with Congress if Perry blows off tomorrow’s deadline.

"We’ll have to wait and see how this all plays out," she told E&E News yesterday. "It’s certainly not helpful to have any secretary that decides he is going to just completely ignore a requirement of Congress."

Rep. Dan Kildee (D-Mich.), the House’s chief deputy whip, said Democrats could go to court to try to enforce the subpoenas, but said that might be too time-consuming. Instead, he speculated, Democrats are more likely to make any refusal a part of an article of impeachment that Trump sought to obstruct the House’s investigation.

"The administration seems much more willing to accept the obstruction because they are fearful of the underlying facts that will be revealed through a full inquiry," he added.

Kildee added that Perry’s role has been a "curiosity or interest" among Democrats but said most of the focus has been on Trump’s behavior and if Perry supported it.

House Natural Resources Chairman Raúl Grijalva (D-Ariz.) said yesterday that he anticipates Perry will ignore tomorrow’s deadline but acknowledged that it’s "kind of a nebulous area" on what happens next.

"What tools do we have; how do we compel him?" Grijalva said. "Then you have to go to court."

Rep. Greg Walden (R-Ore.), the ranking member on Energy and Commerce, declined to say if Perry should comply with the subpoena but said he had no problem with his trips to Ukraine, given the range of energy issues in the former Soviet satellite.

Walden noted that he had twice traveled on congressional delegations to Ukraine — before Trump was elected — with then-House Speaker John Boehner (R-Ohio) and Rep. Fred Upton (R-Mich.), when he chaired the overall committee, where they met with the nation’s top energy leaders.

"Rick Perry’s been around a long time; he knows energy. He knows the line to follow and not cross, and I have full confidence that he acted in the highest standards," said Walden.

Walden also said there is no reason not to raise concerns about public corruption in Ukraine — the reason Trump has cited to justify his pressure on Zelenskiy for information about the Bidens.

"We [always] have been leery about corruption. I’m not talking about Biden or anything else. I’m just talking real-life corruption that’s going on in that government," he said. "It’s pretty hard to recommend American businesses go invest if you don’t know the corruption is being cleaned out."

Rep. Mike Simpson (R-Idaho), ranking member of the House Energy and Water Appropriations Subcommittee, said yesterday that Perry’s involvement in Ukraine and the impeachment inquiry did not come up during an unrelated meeting with Perry and Interior Secretary David Bernhardt, among others, on Capitol Hill on Tuesday.

Simpson said he would expect Perry to comply with House subpoenas "as soon as we pass a resolution authorizing the impeachment inquiry." Like other Republicans, he argued that Democrats haven’t been transparent and should vote in the full House on how to proceed.

"I understand why Trump’s reluctant now because we don’t know where it’s going; it’s all secret," he said in an interview. "And it’s just bullshit."

Simpson added that he doesn’t have any immediate concerns about Perry’s role in Ukraine.

"The Trump administration wants to sell LNG to Eastern Europe so that they’re not dependent on Russia and subject to whatever whims Russia has and stuff, and I think he’s told the secretary, ‘Go sell American energy,’" Simpson said. "So that’s what he’s doing."

Sen. John Barrasso (R-Wyo.) declined to comment on whether Perry should comply with the House subpoena, which he said he was unaware of.

Energy and Natural Resources Chairwoman Lisa Murkowski (R-Alaska) said she did not discuss the Ukrainian investigation with Perry when the two were in Iceland last week for an Arctic policy conference "because it didn’t come up."

Asked if Perry should comply with the subpoena, Murkowski responded, "The administration has made pretty clear that they don’t think that anyone should comply, but that’s what they got to work through."

Sen. John Cornyn (R-Texas) this week did not directly address whether Perry should comply with the subpoena, instead casting doubts about the fairness of the House Democrats’ proceedings. "It’s just all politics, all the time," he told reporters.

"Because once you open yourself up to that stuff, it can be never-ending," Cramer told E&E News. "My general feeling is you should generally comply with subpoenas from legislative committees. But this probe has been so rotten [because] of due process that it’s, you know, everybody has to reconsider the new rules that they are governing by."

Cramer’s comments came after the Senate Republicans weekly policy luncheon, during which Majority Leader Mitch McConnell (R-Ky.) guided his caucus through the impeachment process and subsequent Senate trial, in which all senators will eventually render a verdict by voting on the articles of impeachment.

Senate Republicans anticipate the House voting on impeachment around Thanksgiving, which would make a historic trial the order of Senate business for December.

"You’d have basically Thanksgiving to Christmas, which would be wonderful, because there’s no deadline in the world like the next break," Cramer said of the Christmas recess.