Perry on his unlikely job: ‘God has a sense of humor’ 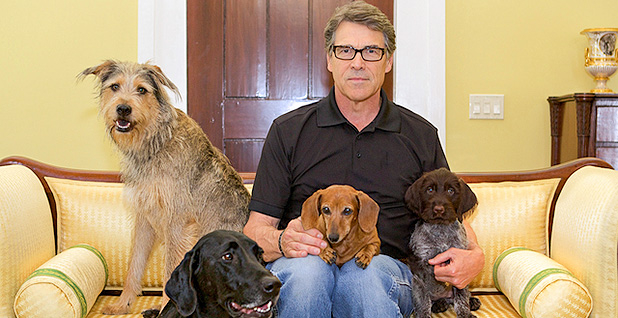 E&E News obtained audio of one of Energy Secretary Rick Perry's first talks with Department of Energy employees. He showed his personal side. Perry/Facebook

Energy Secretary Rick Perry is aware of the irony of his job.

He made abolishing the Department of Energy a part of his platform in his run for the White House in 2012, and according to newly obtained audio, he does find it funny that he’s running the agency in spite of that.

"I was just sharing with a group of lab directors in a quiet little meeting what an extraordinary privilege it is for me to be standing here, and in some ways rather humorous," Perry said in a speech obtained by E&E News through a Freedom of Information Act request.

His remarks came at DOE’s annual Big Ideas Summit in March, just a week after his swearing-in as the 14th secretary of Energy. The summit is a closed-door meeting of more than 250 of the department’s top scientists and personnel to plan ambitious research across DOE’s 17 national laboratories.

It was Perry’s second speech to DOE personnel and his first address outside the agency’s headquarters since taking the reins at the department.

At Washington’s Marriott Georgetown, Perry highlighted his awe for DOE’s work. But former agency officials later expressed concerns about whether Perry’s newfound enthusiasm would translate into a robust budget for the agency, raised questions about the changes he’s made and noted that some of the incoming political DOE staff didn’t share Perry’s favorable views about the department.

Perry’s remarks at the summit also contained seedlings of ideas that would sprout into oft-used tropes in his stump speeches for DOE, including his admiration for scientific research, his support for all energy sources and his record as the longest-serving governor of Texas.

"You all are going to get really tired about hearing about Texas from time to time," he said.

Adam Cohen — who was deputy undersecretary for science and energy at DOE from October 2015 until May of this year — opened the summit.

"I liked what he said. I liked that he highlighted the need for brainstorming" and pursuing ambitious energy goals, Cohen told E&E News this week in an interview.

Perry told attendees of the summit he already had some research priorities in mind.

"I will tell you there are a couple of areas it’s no secret I’m going to be really focused on: cybersecurity and supercomputing," he said. "This is literally about the future of this country, and I don’t want to be too maudlin, but literally the future of mankind could depend on how good, how expeditious we are at taking that exascale [supercomputer] program forward."

Perry mentioned the environment once and didn’t mention climate change or global warming at all during his 22-minute talk.

Some ex-DOE staffers have been impressed by Perry’s eagerness to get to know the agency, even as they’ve been critical about other political appointees and the new administration’s approach to DOE’s budget and structure.

"You’ve got to play to people’s strengths, and one of the strengths of the current secretary is he seems to have passion for the missions," Cohen told E&E.

However, Cohen said, it was apparent during introductory briefings early this year that not all DOE newcomers made the effort to learn about the agency the way Perry did, and that other incoming political staffers were still behind the curve in learning about DOE’s vast scope — ranging from nuclear weapons simulations to export licenses for natural gas.

"Some people were listening and extremely cordial and professional, and some people looked like deer in headlights," Cohen said.

He added that some of the incoming staff was annoyed that outgoing and career DOE personnel kept working at a frenetic pace since the election, issuing reports and memoranda all the way up to Inauguration Day.

The new DOE staff thought that agency workers would take their foot off the gas pedal during the transition, but Cohen said that employees wanted to make sure they tied up loose ends before the new tenants of DOE’s headquarters arrived.

"I got a couple of comments of, ‘Why did we think it was OK to push things out on Jan. 20?’" Cohen said. "The reality is the things that we were pushing out were well underway or were things that were trivial."

"I do have to express a little bit of disappointment. … The budget request is not consistent with where the labs are" as a national priority, Cohen said, though he noted that DOE’s budget was already written when Perry arrived at DOE headquarters.

In testimony before Congress, Perry all but disavowed the funding proposal for the agency.

"I didn’t completely write all this budget," Perry told House appropriators in June as he pledged to work with Congress on its priorities. "I’m asking for a little flexibility" (Climatewire, June 21).

Meanwhile, other former DOE officials are concerned about some of the changes Perry is making to DOE’s management. In particular, DOE is undoing a merger of the science and applied energy functions of the agency, a shift made under former Energy Secretary Ernest Moniz (Climatewire, July 31).

Tarak Shah, who served as chief of staff for science and energy at DOE until January, said it’s still not clear to lawmakers or agency workers who is responsible for what, and the move may reflect a lack of understanding as to why the offices were combined in the first place.

"One thing I would say is it’s clear the administration hasn’t briefed Congress on the reorganization of the department," Shah said. "Based on the hearings, it seems the nominees don’t know their role."

Franklin Orr, the inaugural undersecretary for science and energy at DOE under President Obama, said one of the main functions of his office was to encourage DOE scientists and engineers to work outside of their silos, and the Big Ideas Summit was a reflection of that ethos.

"It was fun to watch over the years we did it," he said. "I thought it was very stimulating to listen to the ideas."

At this year’s summit, Perry concluded that he was happy to be back in public service and had no regrets about taking the job.

"I was excited about the potential" at DOE, Perry said. "I know I made the right decision."