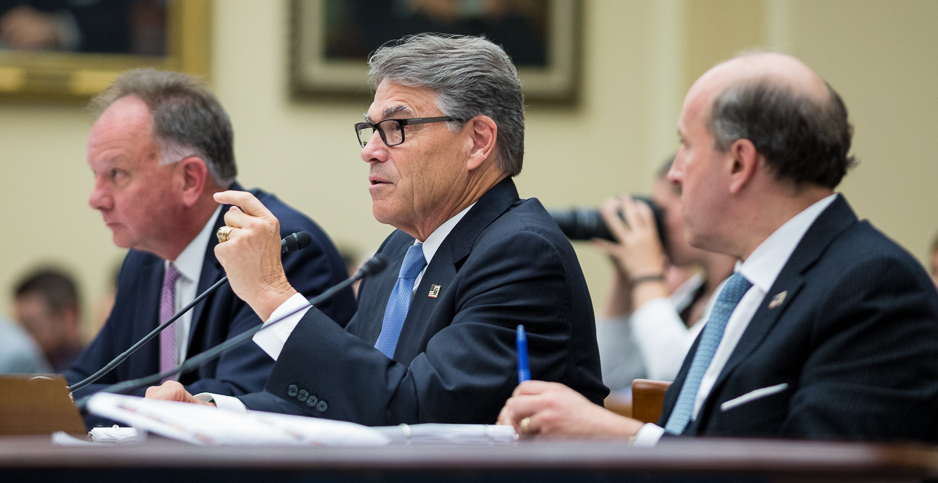 Energy Secretary Rick Perry is facing increasing pressure to testify to Congress about his involvement in the Ukraine controversy. Francis Chung/E&E News

Fresh off announcing his impending departure, Energy Secretary Rick Perry is facing even more congressional pressure to testify about his involvement in the ensnaring Ukraine controversy.

That pressure follows an appearance by Perry this morning on Fox News, where he emphatically defended the Trump administration’s and his own outreach to Ukraine as an anti-corruption campaign and not one of political malfeasance.

The defense came hours before Perry must decide whether the Department of Energy will cooperate with multiple subpoena requests from House Democrats in their impeachment inquiry related to whether the president withheld aid from Ukraine for political purposes.

House Democrats said this morning they want Perry himself to testify on the controversy and answer questions about his growing involvement.

"I texted [House Intelligence Chairman] Adam Schiff [D-Calif.] this morning, I said, I really think you need to call before your committee the secretary and access all the documents that are related to the Department of Energy’s involvement with Ukraine and [Perry’s] travels there," said Rep. Marcy Kaptur (D-Ohio), chairwoman of the Energy-Water spending subcommittee.

Democrats have already demanded DOE documents outlining interactions with other federal departments about Ukraine. A response is due by the end of today.

The equation for compliance, Perry said again this morning, will depend on what his general counsel determines. Other departments and the White House have said they would not cooperate.

"Our general counsel is taking a look at that right now, and when they send their answer in at the end of the day, whatever their decision will be, I’ll follow that," Perry told Fox News.

Democrats, including those with direct ties to the impeachment inquiry, warned today that Perry and DOE need to heed the subpoenas.

"We expect everyone to comply with them," said Foreign Affairs Chairman Eliot Engel (D-N.Y.).

Rep. Paul Tonko (D-N.Y.), chairman of the Energy and Commerce Subcommittee on Environment and Climate Change, said, "I would not only hope, I would assume he will respond to the subpoena."

Tonko said he expected the House to enforce its subpoena if Perry decided to follow other officials in ignoring the inquiry.

"There are opportunities for the committees here to exercise additional powers, which I think they will, but it’s interesting that the resignation and the subpoena are all overlapping," Tonko said.

Perry denied this morning that his departure had anything to do with Ukraine. The president said yesterday he knew about the secretary’s exit for months.

Perry equated the impeachment inquiry — something he dubbed a "crazed idea" — with a similar controversy he went through in 2014 as Texas governor related to a veto. Critics said it was part of a quid pro quo.

"You’ve got to remember, I’ve done this before when I was the governor of the state of Texas," Perry said. "I had a total and absolute trumped-up deal that worked out against me. I’m going to do what the counsel tells me to do."

Perry was eventually cleared in that controversy. And when it comes to the latest one, Perry maintained he never heard about or brought up the Bidens in his dealings in Ukraine.

Democrats are looking into whether the White House pressured Ukraine to investigate former Vice President Joe Biden and his son in exchange for aid. Perry said, "I never heard that said anywhere, anytime, in any conversation."

Perry framed his work with Ukraine as urging leaders, including President Volodymyr Zelenskiy, to do more to rid the country of alleged corruption by government officials and oligarchs.

"Did corruption come up? We heard about corruption in about every conversation we had talking about Ukraine and whether or not President Zelenskiy was going to come over here," Perry said. "Because President Trump wasn’t going to send American money to a country that had a history of being corrupt."

Perry said he pressed Trump to have the now-infamous call with Zelenskiy to encourage him to tackle corruption and to minimize reliance on Russian natural gas.

That account confirms many of the news reports from recent weeks that Trump has told Republican lawmakers that Perry was the one pushing him to make the call to Ukraine.

"I think that is completely and absolutely legitimate," Perry said. "That’s what we were supposed to be doing — bringing the private sector in, American companies, American gas, and showing Europe you can count on us."

In addition to defending the anti-corruption push, Perry also backed Trump’s use of his personal attorney, Rudy Giuliani, to run foreign policy outside the scope of the State Department.

Much of the impeachment inquiry has focused on Giuliani and his involvement in pressuring the Ukrainians about the Bidens.

Perry added, "I didn’t see a problem with that at all."

That comment contradicted U.S. Ambassador to the European Union Gordon Sondland’s private testimony yesterday, according to his opening statements shared by The Washington Post and other media outlets.

Sondland said he, Perry and former U.S. Ukraine envoy Kurt Volker were "disappointed" that Trump directed them to involve Giuliani in their contacts with Ukraine.

"Our view was that the men and women of the State Department, not the president’s personal lawyer, should take responsibility for all aspects of U.S. foreign policy towards Ukraine," he said. But the men, described by Sondland as the "three amigos," followed Trump’s direction.

Perry’s defense also extended to White House acting Chief of Staff Mick Mulvaney, who in a press briefing yesterday suggested a quid pro quo indeed existed related to Ukraine. After the briefing and media fallout, Mulvaney attempted to walk back his comments.

For Perry, those comments were never out of line. "I think he was straight up with what he said," Perry said. "I think there are people trying to connect dots."

Mulvaney’s comments were correct, Perry said, "by basically saying there was no quid pro quo in the sense of the fact of what those folks out there want it to be — that we aren’t going to give you this money unless you go investigate Joe Biden and his son."