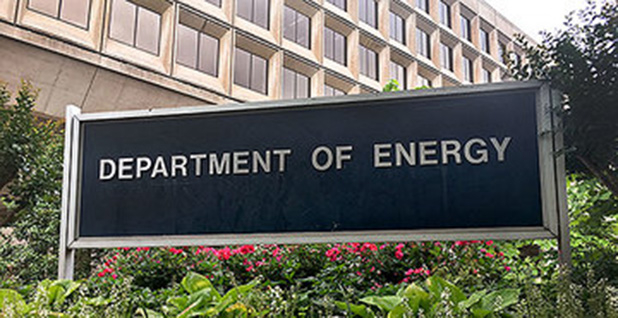 The Trump administration is releasing more details about reorganization at the Department of Energy while seeking to kill off funding for weatherization and revamp spending on carbon capture technology.

In a fiscal 2019 budget justification released today, DOE provides specifics about a newly created Office of Policy that first emerged in December as part of a broad restructuring.

According to President Trump’s budget proposal, DOE is seeking to zero out funding for the Obama-era Office of Energy Policy and Systems Analysis, a shop former Energy Secretary Ernest Moniz created and stocked with top talent to shepherd through the Quadrennial Energy Review and parts of President Obama’s climate strategy.

In its place would be the Office of Policy overseen by Sean Cunningham, a political appointee and former lobbyist for FirstEnergy Corp. and other utilities who played a pivotal role in the Trump administration’s unsuccessful effort to subsidize coal and nuclear plants (Climatewire, Nov. 3, 2017).

"Under the department’s modernization plan announced in December, EPSA is now the Office of Policy, reporting to the undersecretary of Energy," DOE spokeswoman Shaylyn Hynes said. "The FY19 budget request is in line with that."

Past administrations have put their stamp on the policy shop using various names and organizational structures. Energy Secretary Rick Perry’s office will play a key role in supporting the Trump administration’s policy priorities, which have included bolstering the use of coal and expediting exports of domestic energy.

But under Perry, the Office of Policy would see a reduction in staffing and funding. While requesting to zero out about $31 million in fiscal 2019 funds for EPSA, the department is requesting only $2.5 million for the new Office of Policy, money that will be buttressed with carryover funds.

DOE is also planning to decrease the office’s staff through attrition and some reassignments but has said no layoffs are planned. The office currently has more than 60 employees, according to the agency.

The new office, according to DOE’s internal registry that was reviewed by E&E News, appears to have a number of political appointees, including Tristan Abbey, a former Senate GOP Energy and Natural Resources Committee staffer who’s been on detail with the National Security Council since last fall, and Kyle Yunaska, Eric Trump’s brother-in-law.

The documents also show that DOE plans to reorganize funding for carbon capture and sequestration technology. Previously, the agency had separate line items for "carbon storage" and "carbon capture" research. In fiscal 2017, those programs were funded at almost $200 million.

Now DOE plans to eliminate those pathways and instead create a "carbon capture, utilization and storage" program, funded at $40 million in fiscal 2019. It also said it would include some carbon capture research in a separate line item for "advanced energy systems," which investigates improvements to coal plant efficiencies and gasification.

Advanced energy systems is slated to receive a funding increase from current levels under Trump’s plan. Overall, DOE requested $502 million for research and development in the fossil energy office.

DOE said the restructuring with CCS was needed to enable industry to "commercialize and deploy advanced technologies necessary to support a secure and reliable power grid."

"The restructure also focuses funding on early-stage research that enables the next generation of high efficiency and low emission coal fired power plants that can directly compete with other sources of electricity in the market and provide low cost reliable power," DOE said.

CCS advocates have been pushing for higher levels of funding on carbon capture research to try to find new technologies that could lower costs. Multiple CCS projects on power have been canceled because of challenges in financing. This month, Congress expanded tax credits for carbon storage that advocates said would help bring new industrial and power plant projects online.

As he did last year, Trump is proposing to ax the weatherization program and state energy incentives. Earlier this week, it was unclear whether those programs might receive funding in the request, after $120 million was added at the last minute for the Office of Energy Efficiency and Renewable Energy because of the budget deal.

Congress is likely to ignore Trump’s plan on weatherization, considering strong support from key appropriators like Sen. Lisa Murkowski (R-Alaska). Last week, she said, "Brrrrr!" when asked for reaction to ending weatherization money. Oak Ridge National Laboratory has estimated the program saves consumers millions of dollars, while some conservatives have called it a "failure" (Greenwire, March 29, 2017).

DOE said it wanted to terminate funds because of a departmental shift away from deployment activities to early-stage research.

On a conference call this week, DOE Undersecretary Mark Menezes justified EERE proposed cuts by saying many of the programs have already met cost reduction goals (E&E Daily, Feb. 13). The White House proposed slashing the office by more than half, from more than $2 billion to $696 million.

The budget justification shows effects would be uneven. The building technologies office, which oversees mandatory efficiency standards, would see a more than 70 percent cut, as would advanced manufacturing and vehicle technologies. Solar and wind offices would fall by more than 60 percent. Water power and hydrogen and fuel cell technologies would see more modest declines of around 40 percent.

DOE said it was starting a "beyond batteries" initiative involving multiple EERE offices that would work in sync with an existing grid modernization initiative at the national labs.