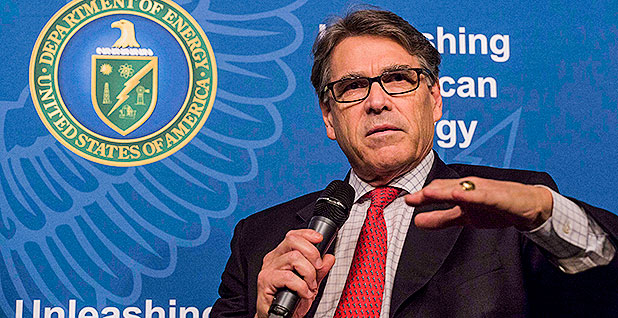 The Department of Energy released its long-awaited report today on policies that are ripe for repeal or reform because they hinder energy production.

The document, which was submitted to the White House and does not mention climate change, is the first sign of the agency’s response to a high-profile executive order the White House issued earlier this year to scrap red tape and promote "energy independence."

U.S. EPA previously said it intended to submit its own report to the White House (Greenwire, Sept. 25).

DOE is targeting NEPA for potential reform. The report calls for taking a closer look at the NEPA process for permitting and export applications, including LNG and infrastructure, and removing any DOE regulatory language not consistent with overarching rules from the White House Council on Environmental Quality.

Perry also suggested that the agency review existing NEPA policies and assess whether more categorical exclusions should be granted, meaning cases in which DOE determines an environmental assessment or environmental impact statement is not required.

The document signals DOE is searching for ways to expedite exports of domestic gas, an expected step given the administration’s focus on "energy dominance."

It’s not clear whether the Trump administration can make the approval process for exports move any faster at DOE, and industry has had few complaints with the Federal Energy Regulatory Commission, an independent agency that conducts environmental reviews of export facilities.

DOE has already taken steps to speed up the process, issuing a proposed rule in August to fast-track the application process for small-scale natural gas exports (Greenwire, Aug. 31).

DOE also said it was reviewing various proposals governing mandatory efficiency rules, including a requirement that standards be reconsidered at least once every six years. Many small businesses and manufacturers consider the six-year timeline "overly burdensome," DOE said.

The department sets minimum efficiency levels for more than 60 categories of appliances. Environmentalists say the program is critical for curbing energy use and greenhouse gas emissions at low cost. Critics, including some conservatives in Congress, say the rules can hurt manufacturers.

The report also calls for reviewing the "process rule" that guides procedures and policies for the efficiency standard program and examining how DOE determines the costs and benefits of efficiency rules.

At the same time, he said, the language is vague and it’s unclear what DOE’s intentions are. Many aspects of DOE’s process, including the six-year timeline, cannot be changed unilaterally by the agency, he said.

Lauren Urbanek, an analyst at the Natural Resources Defense Council, said, "The proposals highlighted in this memo ignore the enormous benefits generated by the appliance standards program since it was signed into law by President Reagan."

The task force also recommended "several areas for reform" that would allow the national labs to operate more efficiently but did not list details. It did reiterate that the labs should focus more on "early-stage" research, an echo of Trump’s budget request. Trump said DOE should return to its core missions in proposing an almost $1 billion cut to DOE’s Office of Science.

Click here to view an annotated PDF of the energy independence executive order.