Perry to meet with mining execs at Trump’s hotel 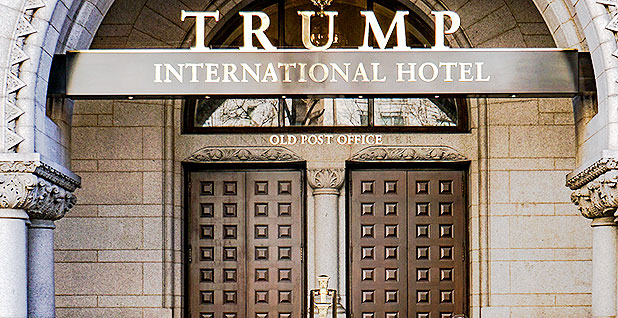 The National Mining Association is hosting a meeting at the Trump International Hotel in Washington, D.C. Ted Eytan/Flickr

Government watchdogs have rebuked the National Mining Association and the American Petroleum Institute for holding events at the hotel owned by the Trump Organization, from which the president has refused to divest.

"The National Mining Association or any other lobbying group has likely concluded that spending money at the Trump International Hotel in D.C. is a solid way of currying favor with the administration — and that spending money anywhere else runs the risk of offending our very sensitive president," Campaign Legal Center legal expert Brendan Fischer told The Intercept.

Interior Secretary Ryan Zinke was originally scheduled to address the NMA at the hotel but withdrew because of "scheduling conflicts," Interior spokeswoman Heather Swift said.

The trade group defended its use of the hotel, which is just blocks from the White House. "We evaluated information from five different venues, and this was the only venue able to accommodate a group of our size and our meeting requirements on our desired dates," NMA spokeswoman Ashley Burke said.

Perry was originally slated to speak at the NMA meeting today, but he instead joined President Trump and U.S. EPA Administrator Scott Pruitt aboard Air Force One to visit hurricane-ravaged Puerto Rico (see related story).

Perry’s plan to speak at the event is also noteworthy given the DOE chief’s urging of the Federal Energy Regulatory Commission to craft a rulemaking that could boost struggling nuclear and coal units (Energywire, Oct. 3).

Many of NMA’s coal company members have already lauded the proposal.

Attending the NMA meeting this morning was Senate Environment and Public Works Chairman John Barrasso (R-Wyo.), whose state is the top uranium and coal producer. In an interview on Capitol Hill, he said he backed Perry’s call for FERC action but had yet to sift through the details of the request.

"It’s not something we want to discuss — one question leads to another," he said. "It was a board of directors meeting, and like all board of director meetings, the proceedings are private."