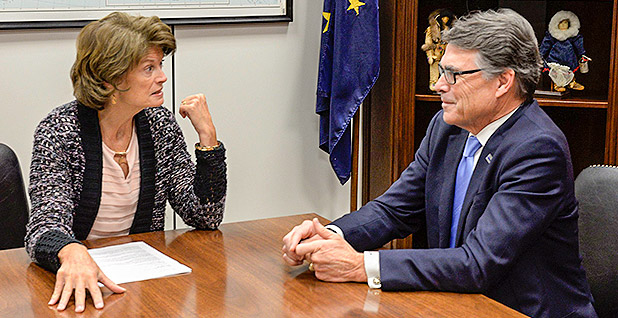 His future boss has called climate change "bullshit," but behind closed doors on Capitol Hill, Energy secretary-in-waiting Rick Perry is talking up reductions in carbon emissions that occurred during the 14 years he served as Texas governor.

As Perry has made the rounds to Senate offices during the past two weeks, increased use of cleaner-burning natural gas and innovative carbon capture utilization and sequestration projects have been a recurring theme of the discussions, several GOP senators said.

"He points out as they converted to a natural gas economy for an eight-year period, they created more jobs than any other state in the nation," Energy and Natural Resources Committee member Bill Cassidy (R-La.) told E&E News last week. "At one point for three years, more jobs than all the other states put together, simultaneously cutting their greenhouse gases, because they progressively converted to natural gas. So that’s part of his pitch."

As the Trump administration readies to take over the federal bureaucracy next week, it’s unclear what, if any, climate policies it may retain from the Obama presidency. On the campaign trail, Trump famously promised to "rip up" the Paris climate agreement, although he walked back the pledge after the election, saying he would keep an "open mind" on the deal.

Nonetheless, after nominating Oklahoma Attorney General Scott Pruitt (R) — the chief foe of U.S. EPA’s Clean Power Plan — as agency administrator, the pillar of President Obama’s climate agenda seems certain to be dismantled one way or another in the coming months.

Perry’s emphasis on carbon emissions suggests the incoming administration is readying to answer the many critics who have decried Trump’s climate comments and his appointees.

Senate Energy and Natural Resources Chairwoman Lisa Murkowski (R-Alaska), who is hoping to schedule a hearing for Perry next week, said she and and the nominee had a "good conversation" about carbon emissions when they met last week.

"He’s got a pretty strong record when he was governor of Texas in terms of what they did to really make a difference as a state," she told E&E News this week. "He talked about the growth in the state, in terms of the number of jobs, the number of new people moving to the state. By all counts, your emissions should rise but in fact they went exactly the other way. And he’s got a pretty good record for management when it comes to how you deal with emissions and effectively the impact on your climate."

According to figures in a 2015 handout of Perry’s "accomplishments" that is circulating on the Hill, Texas added 2.2 million jobs while he was governor.

That document also credits Perry for leading his state to the No. 1 spot in crude oil and natural gas production, becoming the largest producer of electricity in the nation, as well as being the "hands-down leader in wind production."

It notes that air quality in the Lone Star State has "significantly improved" between 2000 and 2013, with reductions on ozone, nitrogen oxides and sulfur dioxide levels.

The handout is silent on carbon dioxide emissions, but data from the U.S. Energy Information Administration shows Texas emitted 646.9 million metric tons of CO2 from fossil fuel generation in 2001 — Perry’s first full year in office — falling to 556.8 million metric tons in 2009, the height of the great recession, when emissions fell nationwide from a slowdown in industrial activity.

In 2014, the last year of Perry’s governorship, carbon emissions measured 641.7 million metric tons, according to EIA.

Murkowski noted the growing contribution of wind and solar to the state’s energy mix but said natural gas use "was big."

"Is this the plan? I don’t know," she said. "But does [Perry] have a lot to point to when it comes to moving a significant and large economy toward reduced emissions? I think so."

"If we return manufacturing here with both our cleaner-burning natural gas and renewables, we will lower global greenhouse gas emissions," he said. "In a sense, if they just pursue their goal of returning manufacturing to the United States and keeping China from gaming and picking off our businesses, it’s just going to happen."

Bill Snape, the senior counsel for the Center for Biological Diversity, scoffed at the notion of natural gas as a climate solution, saying it ignores emissions of methane associated with oil and gas production, given that the warming potential of methane is far greater than CO2.

Industry groups have repeatedly pointed to EPA estimates of shrinking methane emissions, but Snape noted that "even Obama’s EPA struggled to quantify methane."

However, he noted that among Trump’s nominees, Perry "does seem to be the one open to renewables."

GOP senators said there was plenty of discussion about natural gas during their meetings with Perry, including about liquefied natural gas exports.

"I think they’re going to be pro-exports and recognize that as a very valuable national asset for job creation and help and supply our allies around the world with the energy resources they need," Senate Majority Whip John Cornyn (R-Texas) told E&E News this week.

He predicted that the Trump administration will move administratively to put a deadline on the Energy Department to make decisions on LNG export applications, but he signaled that Congress may continue to push a legislative solution as well.

"We might want to go ahead and put it into statute too, just for future administrations," he said.

With Trump in the White House, Cornyn said that lawmakers may look at other legislative remedies to speed exports, including the permitting process for the multibillion-dollar export facilities.

"I think there might be some others, that was sort of the low-hanging fruit, but I hope we look at the whole thing comprehensively to see what sort of impediments we can remove to facilitate exports," he said.

Coincidentally, Perry’s Hill visits are coinciding with the announcement by NRG Energy Inc. that its Petra Nova project — the world’s largest retrofit of a coal plant with CCS technology — is operational near Houston (Energywire, Jan. 10).

Other Republicans said they talked at length with Perry on carbon-capture technologies.

"I emphasized a lot how important research and development on CCS and CCUS is for us as a state, to elongate the life of coal," Sen. Shelley Moore Capito (R-W.Va.) told E&E News this week. "We’re sort of like-minded on that."

"I’ve invited him to come out to North Dakota, and he said he would do that," Hoeven told E&E News this week.

Cassidy said he and Perry also talked about tidal energy projects off the Texas coast, nuclear power, CCS, as well as a pilot project in which liquefied CO2 is used to drive a turbine.

"So he can rightfully say that he is about all of the above, and it’s over a state that has expanded economically but has cut greenhouse gas emissions," he said.