Perry uses campaign funds to fly his wife around the world 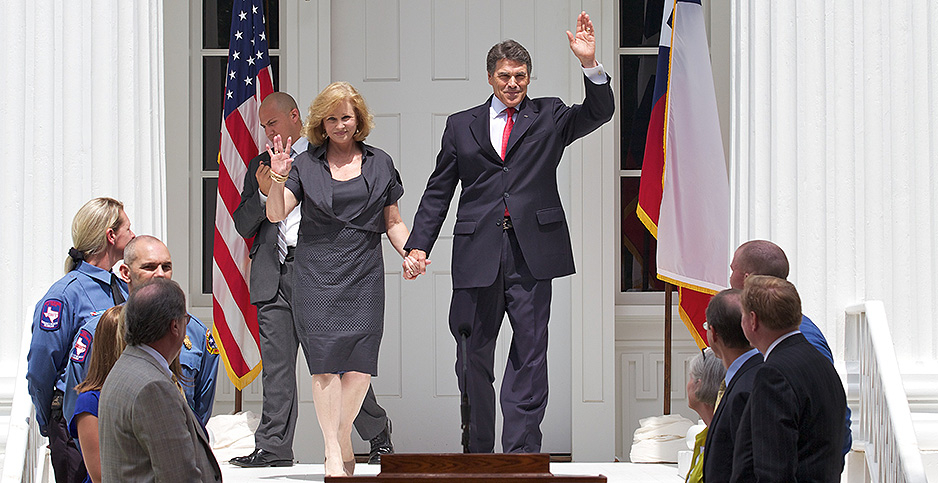 A former nurse with no apparent experience in energy policy, Perry has traveled alongside her husband to international energy talks and conferences held in England, South Africa, Italy, Austria and France since he took office more than a year ago.

To cover the cost of those commercial flights, the Perrys appear to have pulled almost $60,000 in campaign funds tied to "Texans for Rick Perry," the Energy secretary and former Texas governor’s primary campaign account.

Details of her trips emerged in disclosure forms the Texas Ethics Commission made public. The San Antonio Express-News first reported on the documents. The DOE in a statement defended the travel and said the agency adheres to all federal ethical guidelines. According to the agency, there is precedent for the DOE chief traveling with his spouse, and the secretary has traveled without his wife for the majority of his international travel. Anita Perry, according to the agency, does not hold a security clearance and has not participated in any meetings that require one.

"Mrs. Perry has traveled with Secretary Perry on occasion, adding valuable support to him as he advances DOE’s mission abroad. As these filings confirm, no taxpayer dollars have been spent on Mrs. Perry’s air travel and funding for it is authorized under State and Federal laws and regulations," said Shaylyn Hynes, a spokeswoman for the department. "The Department of Energy follows federal travel regulations without exception. All travel when Mrs. Perry accompanies the Secretary is reviewed and cleared by a career designated agency ethics official."

Campaign funds covered four of the former Texas first lady’s trips last year at a cost of about $50,000. Those destinations were Paris, Vienna, Rome and Cape Town, South Africa, according to finance disclosure forms.

More recently, Perry traveled with her husband earlier this year to London to meet with officials from the Saudi government at a cost of around $17,000.

According to a disclosure filed with the Texas Ethics Commission, she participated in "Saudi nuclear mtgs: Travel to engage in govt related activities of Sec.’s office."

The Energy secretary traveled to London to focus on a deal to allow nuclear reactors using American technology to be built in Saudi Arabia, a push that’s faced criticism from Republicans in the wake of the death of Saudi journalist Jamal Khashoggi (Greenwire, Nov. 1).

Congress ultimately would have to approve any deal struck by the Trump administration under the Atomic Energy Act, which requires an agreement under Section 123 in order for the United States to participate in peaceful uses of nuclear power with another country. A deal could be worth tens of billions of dollars.

What role Anita Perry would have played in such a trip is unclear.

Under Texas law, money spent on a spouse is allowed "if the travel is in connection with the performance of duties of the officeholder’s office," according to the Texas Ethics Commission.

That holds even when the candidate moves to federal office, the commission states.

In the same statute, the state writes that campaign contributions are given "with the intent that it be used in connection with a campaign for elective office."

That is the heart of the problem, according to Sheila Krumholz, the executive director of the Center for Responsive Politics, a nonpartisan research group: The Perrys’ actions exploit the proper relationship between candidates and the campaign donors.

While it may be legal, she said, the practice is "not standard" and "questionable in terms of ethical standards."

Krumholz added that had the funds used to pay for Anita Perry’s flights been federal, the purchases would have been banned under the Ethics Reform Act of 1989.

While there doesn’t appear to be a legal violation with the use of campaign funds for such trips, Craig McDonald, director of Texans for Public Justice, said such spending isn’t appropriate.

Under Texas law, leftover campaign funds cannot be used for personal purposes, but there are a handful of ways to spend the money down, including donating the funds, giving it to the secretary of state in Texas to fund primary elections or handing it off to a nonprofit, he said.

Under additional advisory opinions or rulings, former state candidates who become federal officers can use the funds for appropriate expenses, McDonald said. Perry appears to have determined the use of such of funds for his wife’s travel was appropriate, he added, but Texans for Public Justice doesn’t agree — but also knows of no avenue for recourse. McDonald said Perry should give the money to a nonprofit.

"Our complaint with this is the rules are too broad, the rules can be self-interpreted," he said. "He left Texas, he should leave his campaign war chest behind."

It’s unclear who Perry met with or what meetings she attended during her trips, but some details have surfaced.

Last year, Anita Perry accompanied her husband to South Africa as part of the agency’s official delegation — her second trip abroad with the department at the time.

"In addition to speaking about women in energy, she attended the secretary’s keynote address to Africa Oil Week and engaged with both public and private energy stakeholders at events throughout the week," Hynes said in an email at the time (Greenwire, Oct. 30, 2017).

"Mrs. Perry was an effective member of the delegation. Both her passionate message and presence were well received and we look forward to utilizing her as an asset to further the department’s efforts in the future."

Also at the time, Rick Perry tweeted photos of his wife standing alongside State Department officials, appearing on panels discussing gas exports and sitting at the table during a discussion with the U.S. consulate general of Cape Town, a branch of the U.S. diplomatic mission to South Africa.

But fewer photos have emerged in recent months, despite continued trips. Rick Perry, for example, posted no photos of his trip to London in late February.

Some ethics officials have raised concerns that the former first lady’s travel may violate anti-nepotism statutes, while others have questioned her qualifications for meeting with international energy experts on behalf of DOE.

Anita Perry, 65, graduated from what was then West Texas State University in 1974 with a bachelor’s degree in nursing.

She has a master’s in nursing from the University of Texas Health Science Center at San Antonio and spent more than a decade in health care, including as a nurse in the areas of surgery, pediatrics, intensive care, consulting and administration.

The daughter of a physician, Perry has called health care "a lifelong passion" and helped develop and host the annual Texas Conference for Women, which draws attention to women’s professional development, health care and personal growth, according to an online biography.

But the Energy secretary has also offered reassurances to lawmakers that his wife’s travel is by the book. In comments Rick Perry submitted to the House Energy and Commerce Committee earlier this year, he emphasized that his wife’s travel with DOE had been reviewed and approved by DOE’s Office of the General Counsel (Greenwire, May 2).

"I know the high value we place on being good stewards of taxpayer dollars," Rick Perry said at the time. "Therefore, her travel is not done at taxpayer expense."